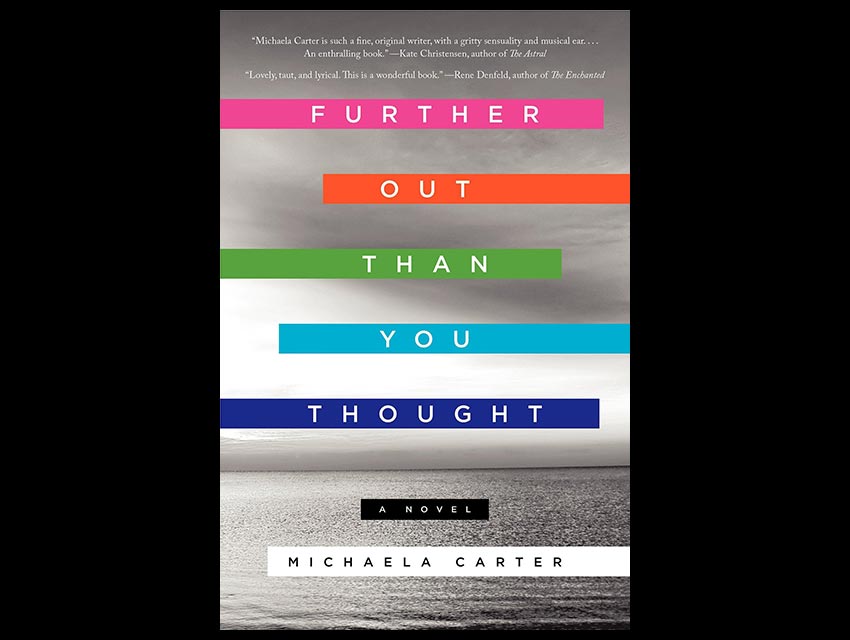 Published last month by HarperCollins, Michaela Carter’s novel Further Out Than You Thought is a glittery, smoke-encrusted Proustian madeleine. It stars Gwendolyn Griffith, a poet working as a stripper and a West Coast cousin of the heroines of Mary Gaitskill’s Veronica and Joan Didion’s Play It As It Lays. The book takes readers back to 1992 Los Angeles, where, along with her perpetually stoned musician boyfriend Leo and their dying best friend Count Valiant, Gwen lives in the cockroach-infested Miracle Mile Cornell Apartments once owned by Mae West. When she discovers that she is pregnant on the same day that the Rodney King riots break out, Gwen navigates the transformed city while dodging violence, fire, and a lone mountain lion in whose eyes she sees “no future and no past […] only this moment—in which Gwen was awake, alive, her pulse beating now, now, now.” This description could also apply to the vividly imagined lost city Carter captures in Further Out Than You Thought, a place “Too pretty. The way things look that are past—not passing, not going, but gone.”

Michaela Carter lived in Los Angeles from 1985 to 1993. After years of writing poems about the events described in the novel, Carter began the book as a memoir, but soon found that fiction offered her more freedom. “It was this time in my life that I don’t necessarily want to live in forever, but it was fun to be able to go through it in slow motion and re-dream it,” she says. “It was a great way to love it for the last time and let it go.”

Carter now lives in Prescott, Arizona, where she recently cofounded a bookstore, Peregrine Book Company, and teaches creative writing at Yavapai College. She remembers L.A. as mysterious, sexy, and poignant. “I once saw Little Richard driving down Hollywood Boulevard in a white limousine in a white tux,” she recalls. “He looked so beautiful, so iconic.”

Here is her guide to four of the late great L.A. nightspots immortalized in Further Out Than You Thought.

1. The Century Lounge, 5601 W. Century Boulevard, Westchester
“The Century Lounge was warm and red, like a womb. The walls were red, and the curtains—everywhere there were curtains; between the main stage and the backstage, between the private dance booths and the showroom—red velvet curtains.”

“The owner of the Century Lounge would come in sometimes and tip the girls a lot of money—$20s or $50s—but he would tear the bills in half and crumple them on different sides of the stage. He was strange. He never really made any sense. He’d call a meeting at 2 in the morning and start talking and you’d have no idea what he was talking about.”

2. The Star Strip Gentlemen’s Club, 865 N. La Cienega, West Hollywood
“The Century Lounge is gone, but another place where I worked briefly before that is still open, The Star Strip Gentlemen’s Club on La Cienega in West Hollywood,” Carter says. “I think it’s very different now. The owner had an apartment upstairs with ’70s airbrushed nudes on the walls. I was warned that he lured girls up there, and he did take me up there at one point. He disappeared into the bathroom and came out in these tighty whities—it was really sad—and then I left and he never bothered me again.”

“Places like Star Strip and Century Lounge had this lack of polish that made them comfortable. After Star Strip closed, I had to pay for another semester of grad school, and I figured, okay, I’ll do this for a little longer. I went to some place in Silver Lake that had just opened up, and it was horrifying. It had super bright lights, and everything was shiny, and they had water features, which was really bizarre—squirting the dancers with showerheads—and I just thought, there’s no way I’ll dance here.”

3. Club Fuck, various locations
“We got tired of the L.A. club scene. […] There’s the Roxy, so fucking pretentious. Or the Whisky with the rockers. It was never my thing […] So we tried Club Fuck.”

Club Fuck appears only briefly in Carter’s novel, during a conversation between Gwen’s fellow Century Lounge strippers, but it casts a long shadow on the history of underground LGBT nightlife in L.A. Founded by nightlife impresario James Stone, who passed away last year, Club Fuck was an inclusive celebration of deviancy that brought S&M into the LA underground mainstream (Stone went on to found an even higher-profile fetish event series, West Hollywood’s Sin-a-Matic). Held at various nightclubs in Silver Lake, Club Fuck was a gathering place for darker sexual proclivities where anything other than actual penetrative sex went, Carter says. Despite its edgy vibe, Club Fuck is most fondly remembered for the sense of community and openness it encouraged among its attendees.

“I actually never went to Club Fuck, but I did hear about it from a few people. I think they eventually got shut down in 1993. There was S&M stuff like whipping, body piercing. One woman I worked with would have bruises from being whipped. When it closed down, she was very sad—there was no place like that left to go.”

4. Café Largo, 432 N. Fairfax
“Café Largo, May 10, 1990, two years ago already. […] She’d danced to Valiant’s campy tune “She-Devil” in a short, tight black dress and black go-go boots, and Leo had played the keyboard. The Peruvian soprano Yma Sumac, so famous in the fifties, had happened to see the show and told him he had a velvet tongue. It was the last time Valiant had performed in public.”

“Café Largo was an amazing place,” Carter says. “That was where my friend Kurt Velour played with his band the Night Strangers [on whom the Further Out Than You Thought character Count Valiant and his band the Midnight Strangers are based]. I was a go-go dancer in his show. It was a piano bar, kind of a forerunner of a lot of the lounge acts that became bigger in the late ’90s and early 2000s, which was what Kurt was doing. I thought if he had lived longer he could have been a part of that.”

“A little bit later in the ’90s, the same guy who had opened Largo opened Luna Park [at 672 S. La Brea]. After my daughter was born, my boyfriend’s band Lady Mayhem played there, and I danced with them. I was one of the vestal virgins, Euphoria. After the show, I walked out and I pushed my daughter’s stroller—she was two—through the Halloween parade, all these gorgeous men in feathers and G-strings and little else. It was just awesome. Just an awesome, bizarre memory.”

Michaela Carter reads from and will sign copies of her novel at Book Soup at 7 p.m. on Tuesday, September 9.