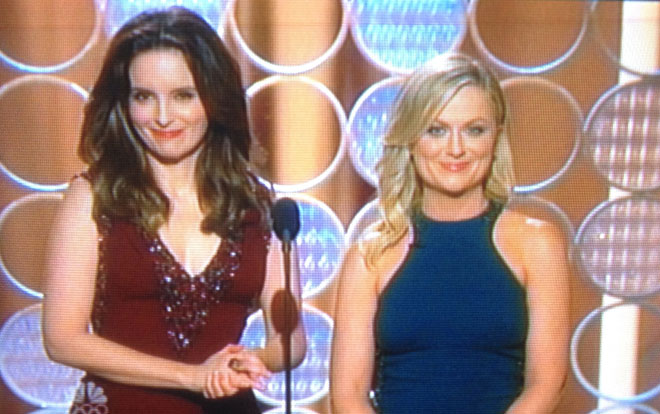 It’s a repeat. For the second year in a row, Tina Fey and Amy did a fantastic job hosting the Golden Globes. Here are their nine best jokes from the 2014 show.

9. The Show’s Length
“We’re going to get this show done in three hours. Or as Martin Scorsese calls it: Act 1.”

8. Matt Damon
“On any other night in any other room you would be a big deal, but tonight you’re basically a garbage person.”

7. American Hustle
“Interesting fact: The original title of that movie was Explosion at the Wig Factory.”

5. The Cecil B. DeMille Award
“This year Woody Allen is getting it only a few year after Martin Scorsese won it. I assume the award is for tiniest man with biggest glasses.”

4. 12 Years a Slave
Amy: “After seeing that movie, I can honestly say I will never look at slavery the same way again.”
Tina: “Wait, how were you—”
Amy: “And what a year for television!”

3. Netflix
“Enjoy it, Netflix, because you’re not going to be so smug when Snapchat’s up here in a few years accepting the award for best drama.”

2. The Golden Globes
“This is Hollywood and if something works they’ll just keep doing it over and over until everyone’s bored and hates it.”

1. Gravity
“It’s the story of how George Clooney would rather float away into space and die than spend one more minute with a woman his own age.”

BONUS: “Dying is easy, comedy is hard. I believe it was Shia LaBeouf who said that.” -Jim Carrey