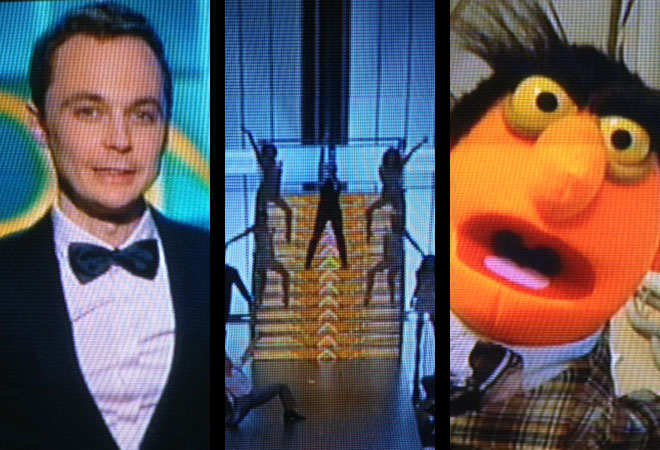 “This just in: No one in America is winning their office Emmy pool,” Neil Patrick Harris joked during last night’s Primetime Emmys. That’d be true—if anyone bothered to do an Emmys pool. But the erstwhile host was right about one thing: It was, from start to finish, a night of upsets.

Although this was a breakthrough year for Netflix, which earned 14 nominations for House of Cards, Arrested Development, and Hemlock Grove (expect that number to go up next year with Orange is the New Black), cable dramas took home most of the big prizes, though not necessarily the shows you’d expect. (Full list of winners below)

Brevity Is the Soul of Wit
Winning the evening’s first award, Outstanding Supporting Actress in a Comedy, Merritt Wever of Nurse Jackie promptly delivered the shortest and best acceptance speech of the Emmys, maybe of any awards show ever: “Thank you so much. Thank you so much. I gotta go. Bye.” Was she just nervous or was it a dig at the brutal way Emmy producers cut off speeches after 45 seconds? We’d like to think it was the latter.

Time Out of Mind
Speaking of acceptance speeches, if it felt like most of them were stilted and awkward, don’t blame the winners. Many of them arrived at the mic flustered and with barely enough time to spout the most rote “thank yous.” Nobody wants to hear actors prattle on endlessly, but the ruthlessly enforced time limit made the speeches more boring—not less.

Hale to the Chief’s Aide
If there were an award for Best Onstage Acceptance Bit, it would go to Tony Hale. After winning Supporting Actor in a Comedy Series, he stood behind fellow Veep winner Julia Louis-Dreyfus holding her clutch and whispering reminders in her ear just as his character Gary Walsh does on the show. Also, how often does a theater company in Tallahassee get a shout-out at the Emmys?

Clock Management
When actors like Anna Gunn get played off the stage, remember the show’s tedious, unfunny intro, Elton John’s tribute song to Liberace, and the fake PSA featuring the cast of How I Met Your Mother. Because that was time well spent.

Eighth Time’s A Charm
After seven nominations dating back to 1962, the 84-year-old Bob Newhart finally won an Emmy. It was for his portrayal of Professor Proton on The Big Bang Theory. He received it at the Creative Emmys last week, but when Jim Parsons brought him on stage, Newhart earned the night’s most genuine standing ovation.

Please Do Stop the Music
At this point in his career, when does Elton John not give “a very special performance”? When does he just give an ordinary performance? It would’ve been better than “Candelabra in the Wind,” or whatever that song he phoned in was officially called. As for Carrie Underwood, the only way to redeem her cover of the Beatles’ “Yesterday” would have been for the producers to pan across the stage and reveal the American Idol. Gotta be honest, dawg, the performance was a little pitchy and felt like karaoke.

Dancing Shoes
For the first time ever, the choreography award was upgraded from the Creative Emmys to the Primetime Emmys. A dance medley honoring the biggest shows infused the telecast with a much-needed dose of surrealism. (Boardwalk Empire and Daft Punk—there’s a romance no one saw coming.) It was also transcendently WTF.

I’ll Do Funny Things If You Want Me To
Trust comedy writers to come up with the best gags for the reading aloud of lengthy nominee lists. The Muppet-like versions of The Daily Show’s scribes were adorable.

Even In Death
Having actors pay tribute to recently deceased friends and mentors must have sounded like a touching concept. Occasionally it was—like Rob Reiner on Jean Stapleton and Edie Falco on James Gandolfini. More often than not, it was stiff and uncomfortable. As @Albert Brooks tweeted: “When I die just show clips of me and shut the f up.”

Lens Itself to Humor
African-American Emmy pioneer Diahann Carroll said: “The men are much more beautiful than when I was doing television.” Cut to Bryan Cranston and Louis C.K. Later, a camera got in Kevin Spacey’s face and he swatted it away like it was a needy puppy. Someone in the control booth has a sense of humor.

Not So Stunning Upsets
When Kerry Washington lost Lead Actress in a Drama Series to Claire Danes we were as unhappy as Diahann Carroll. How over-the-top hysterical does an actress need to be to win an Emmy? Maybe Scandal’s producers could give Olivia Pope multiple personality disorder or Tourette’s so Washington would finally have a shot. How does Bobby Cannavale beat Aaron Paul—or Mandy Patinkin or Jonathan Banks? How does Modern Family beat Louie? Modern Family is a terrific show that elevates the comedy genre, but Louie is a brilliant one that breaks the genre wide open. How on earth does Jeff Daniels beat Bryan Cranston? To his credit, Daniels seemed charming, sincere, and even quoted playwright Lanford Wilson, but even at The Newsroom’s best, his depiction of Will McAvoy isn’t one one-thousandth as complicated or deeply realized as Breaking Bad’s Walter White. Upsets usually indicate adventurousness on the part of voters. Not this year.