Home Uncategorized Last Night: An Intimate Evening with David Crosby at the Troubadour 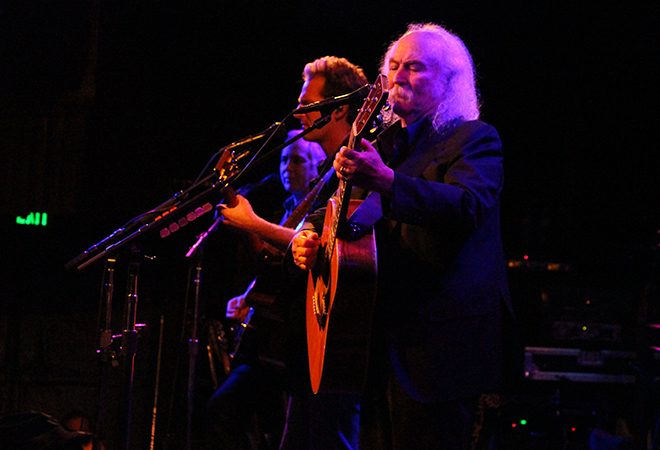 Last night, David Crosby rounded out his five-night residency at the Troubadour after a week of intimate shows that sold out almost as soon as they were announced. Originally planned for February they were rescheduled due to heart surgery. Two months after his operation, the 72-year-old Rock and Roll Hall of Famer, seemed healthy and in good humor.

During the first half of his set, he announced he’d be playing the entirety of his latest release, Croz, earning a standing ovation from the reverent crowd before he even began. His first solo album in two decades features reflective lyrics over atmospheric, jazzy soft rock ballads. Crosby wrote many of the songs with his son, James Raymond, who also plays in his band. Crosby wryly apologized for all the new material, though he also said it’s nice to play new material when you’ve been in a band for more than 40 years. He promised the second half of the evening would include songs the audience would recognize.

And he delivered. After an intermission, he took a tour through his hits playing Byrds classics, Crosby, Stills & Nash tunes, and CSNY hits. He also pointed out his own sense of déjà vu: The Troubadour stage was where the Byrds got their start nearly five decades ago. He brought out fellow Byrd Chris Hillman to join him on “Turn! Turn! Turn! (To Everything There Is A Season),” which he dedicated to its writer, the late Pete Seeger.

Crosby, Stills & Nash embark on an extensive U.S. tour in July ending at the Greek Theater L.A. on Oct. 4. Tickets are on sale now.