Home Film Last Days in Vietnam, A Chronicle of the Chaotic Evacuation of Saigon 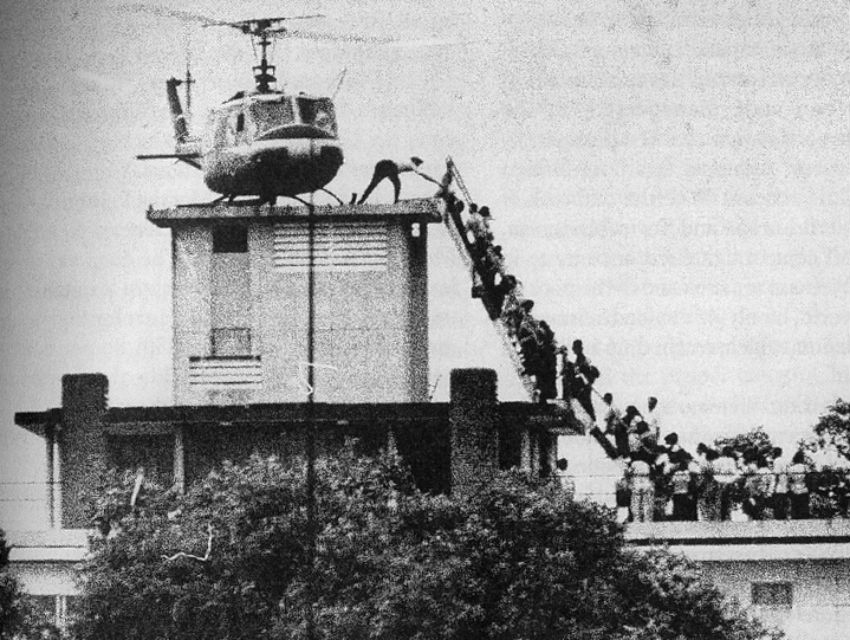 For most Americans who remember it, the end of the Vietnam War is inextricably linked with images of chaos: desperate residents of Saigon climbing the walls of the U.S. embassy, sailors on navy vessels pushing helicopters overboard to make room for more refugees. Few people know the full story behind the city’s controversial mass-evacuation in April 1975. Told by survivors and key figures in the exodus, Last Days in Vietnam unearths new footage and reexamines those events in a way that raises questions about contemporary conflicts in Irag, Afghanistan, and with ISIS.

The film was directed by Rory Kennedy, whose uncle John F. Kennedy was the first president to order U.S. troops to Vietnam in a conflict that would span three subsequent presidencies. Kennedy, the daughter of former attorney general Robert F. Kennedy, is an award-winning documentarian whose credits include 2004’s Homestead Strike, chronicling one of the bloodiest labor disputes in U.S. history, and 2012’s Ethel, a touching portrait of her mother and her parents’ relationship.

Kennedy lives in Malibu with her husband, writer Mark Bailey, whose recent book Of All the Gin Joints chronicles Hollywood’s boozy history. We spoke with Kennedy about those fateful last few days in South Vietnam and the America’s involvement in the war.

What got you interested in this particular chapter of the Vietnam War?
It was in connection to Iraq and Afghanistan, especially now that we’re leaving those countries. How do you go about that? The film itself doesn’t make any explicit correlation or connection. It’s a film about Vietnam, but I think people watching will see a connection. I’ve always been interested in Vietnam and its place in our nation’s history. I hope there’s something to learn from gaining a better understanding of what took place in those last days of the Vietnam War.

Did you have a clear understanding of the events going into this project?
I thought I knew a lot more than I did. Once I started researching it I was really hit by how dramatic those events were and how little I knew. It’s striking to me how few people, even of the Baby Boom generation, really know what happened.

Why do you think that is?
In the immediate aftermath of the war we wanted to move on as a country, I think. There was no way of making sense of the images people saw on TV, there was no real narrative to was going on on the ground, or in Washington, for that matter. This film is an opportunity to look back, especially because the vast majority of people who can help us understand what happened in Vietnam are still alive.

The film focuses on a handful of people during those last days in Saigon. You draw a very compelling portrait of Ambassador Graham Martin, who was initially reluctant to order an evacuation. What impression did you get of him?
He’s one of the few people we profile in the film who isn’t alive anymore. That presented some limitation, but I think we were able to capture the nuances of his personality. He was in a position to greenlight the evacuation but was resistant because of his personal connection to South Vietnam. He had an emotional stake in the war. His stepson died there.

How did he handle the situation?
Once it became evident that there were no other options, he did everything he could, risking his own life by staying in the embassy until 3:45 a.m. on the night Saigon fell, after he got as many South Vietnamese out as possible. He only left because he received a presidential order, which is something you really can’t refuse. He kept on as long as he could because he knew that once all the Americans were out, the evacuation would end.

While staying true to the course of events, Last Days in Vietnam is anything but dry. How did you turn all this material into a suspenseful narrative?
I had a great team and worked very closely with writer and producer Keven McAlester who helped with much of the initial research. We pieced together the story along with writer Mark Bailey, who is also my husband. Mark played a critical role in the editing process. He normally writes dramatic films so he helped us hone in on how to tell the story. A lot of people say that they were sitting on the edge of their seats while watching this movie. I think Mark’s writing helped deliver the film with the right level of intensity.

Was that a priority?
I really prioritized not just understanding the characters and the people but also the extraordinary stories of bravery we came across. It was important to us to tell these individual stories. I also prioritized the visual elements. I tried to get as much original archival footage as possible. I was very lucky to be put in touch with someone who helped uncover the story of the USS Kirk and its role in the evacuation. When I told him about the film he said that he had come across an entire box of undeveloped footage from the USS Kirk in an attic. We developed the footage together. It was a treasure trove of images that have never been seen before that really helped tell the story.

Did anything surprise you in researching this film?
The whole story surprised me, frankly. I really didn’t understand what happened. Everything from the Paris Peace Accords, to the role President Nixon played, to the Marines who were initially left behind, to the people desperately clinging on to the helicopters. And these amazing stories of Americans and South Vietnamese who risked so much to save others in anyway they could.

Why do you think forty years passed before we could revisit this painful chapter of American history?
Forty years seems to be a good vantage point. We can still access the rawness of the emotion because people are still alive and can recall the events clearly. Vietnam is not our proudest moment. I think that for many people the pain in the aftermath of the war, the loss, and the fact there wasn’t much to show for it was too much. We don’t want to revisit it but we need to, so we don’t keep making the same mistakes. It’s important to explore these things.

Is there a point that you wanted to convey with Last Days in Vietnam?
I really try to tell the story in a neutral non-political way and just lay out the events as they are. We don’t have a narrator or any historians looking back. It’s all first-hand accounts. The story deserves that. The film is a reminder of the human cost of war. I think it highlights the fact that when we go into these countries, we then take on the responsibility of the people who help us there. They are in great jeopardy doing that. We have a special responsibility to them. You see that in both Iraq and Afghanistan where people who have worked with us as translators and in other capacities are much more vulnerable because of it. To me it’s very relevant in terms of our decision to go back into Iraq and engage with ISIS, but it also raises larger questions about going into war in the first place.