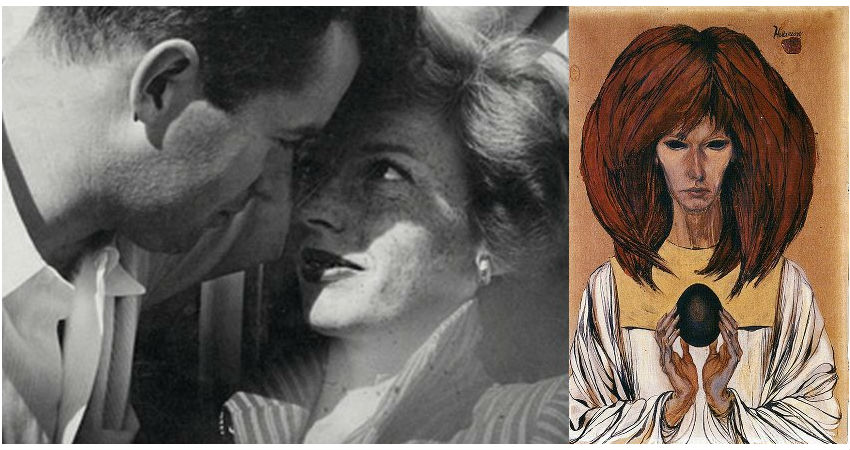 What—or rather, who—do British master of the dark arts Aleister Crowley, experimental filmmaker Kenneth Anger, and actor Dennis Hopper have in common? It’s not the beginning of an esoteric joke, but a statement of fact about the transfixing and mysterious L.A. artist Cameron, who knew and worked with all three. Despite the fact that her life and work influenced many prominent L.A. luminaries, Cameron’s oeuvre of paintings, drawings, and films remained largely under the radar both during her life and after her death in 1995. Until now, that is: since October, MOCA Pacific Design Center has presented an exhibition whose psychedelic emotional wallop belies its compact size. There’s just a few days left to catch Cameron: Songs for the Witch Woman, which closes January 18.

Although she appeared in Anger’s seminal 1954 film Inauguration of the Pleasure Dome, shared a meaningful correspondence with mythologist Joseph Campbell, and was married to a co-founder of the Jet Propulsion Laboratory— in the 1940s a hotbed of occultism whose broader social circle also included L. Ron Hubbard—Cameron has been largely erased from the history of art in L.A. The reasons for Cameron’s paucity of recognition are manifold, ranging from the tabloid controversy that dogged the artist after her husband’s early death to Cameron’s habit of destroying her own work, but the primary cause is on display in no less prominent a venue than last year’s Los Angeles Times review of the show, in which Christopher Knight calls Cameron “not much of an artist” and her work “a primordial ooze from which nothing much finally emerges.” The establishment still has a hard time taking the deeply personal work of a metaphysically-inclined female artist seriously, particularly one who devoted the better part of her life to the study of magic—which is precisely why this is a show you don’t want to miss.

Born Marjorie Cameron in Iowa in 1922, she worked as a cartographer and wardrobe mistress as a member of the Navy. After leaving the military in 1945, Cameron met Jack Parsons, a scientist and avid member of Thelemite Ordo Templi Orientis, a European fraternal organization that became focused on magic under the leadership of Aleister Crowley. With Hubbard, Parsons had recently completed a ritual called “The Babalon Rite” in an effort to manifest the mortal incarnation of his divine mate, whom he referred to as the Scarlet Woman; by all accounts, it was love at first sight when he laid eyes on Cameron, a striking redhead. She became a devout convert to Parsons’s occult practices, and the couple was married within the year. Their electric connection is evident in their wedding photograph (included in the exhibition) but the marriage was cut short by Parsons’s 1952 death in a lab accident that occurred the night before he and Cameron planned to move to Mexico.

By this time Cameron had already produced several of the striking pieces on display in Songs for the Witch Woman, including illustrations for the book of Parsons’s poetry from which the exhibition takes its title that demonstrate her mastery of line and shape, and several haunting depictions of Parsons as dark angel, satyr, and Merlin. The loss of her husband further galvanized her creativity: by narrowing Cameron’s spiritual objective to a grief-driven quest to reconnect with Jack through astral communication, Parsons’s death stoked her rich talent into a transcendent gift. Her art—which came to include her persona itself and won her a role in the 1961 thriller Night Tide, in which she costarred with Hopper—limns acts of intimacy for their bare power, evincing a clear-eyed understanding of the stakes of personal connection.

Cameron’s artwork evokes a broad pantheon of influences. The self-portrait “Black Egg” and “Holy Guardian Angel According to Aleister Crowley” are small, dramatic dark-palate icons. “Sun Horse” is akin to Blue Period Picasso in tone and feeling, while the abstract miniatures that comprise the late series Pluto Transiting the Twelfth House and Lion Path series demonstrate Cameron’s use of her cartographic training to map her pursuit of self-knowledge. Two tall, narrow paintings—“Buried Doll” and a portrait of Cameron’s daughter Crystal—would have fit right in as set dressing for the creepy interiors on the first season of True Detective. The comparison is more apt than might appear, as “Buried Doll” is the only surviving painting from The Wormwood Star, a short film by Curtis Harrington also on display at the exhibition in which Cameron appears as alchemist and angel both, invoker and the invoked.

The most powerful piece is the one that wrote Cameron into L.A. history, 1955’s “Peyote Vision,” which depicts a mystical sexual encounter between a faceless male figure and a woman whose pleasure is evident in her vein-wired breasts and ecstatic serpent’s tongue. “Once these things have surfaced and become conscious,” Cameron wrote of the hallucinatory trip that inspired the drawing (which provoked a 1956 LAPD Vice Squad raid on Ferus Gallery), “you have to adjust your life to it. You have to make tremendous alterations.” Do yourself a favor and experience the message in action at MOCA while you still have the chance.