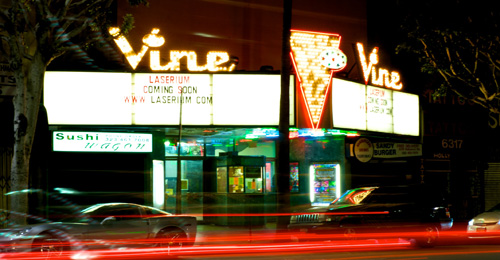 With all the buzz circulating about the new Laserium, back from a six-year hiatus and in a new home at Hollywood and Vine, I had high expectations for the June 26th opening. The ‘save the date’ promised a “brand new experience for young and old alike,” so I was disappointed when the vivid laser displays resembled multicolor spiralgraph designs projected on top of a glorified Mac screen saver (“Flurry,” to be exact). Granted, Pink Floyd’s not really my thing, so perhaps I should have chosen to preview the show—essentially a 3-D upgrade of the former 2-D experience offered at Griffith Park Observatory for 28 years —on a night that featured the Beatles or Led Zeppelin, the two other core Laserium soundtracks. It didn’t help that the springy, velour-covered chairs at the refurbished Vine Theater fueled my fatigue or that the new LightDancer interactive light instrument, which allows audience members to create their own accompaniments to music, didn’t make its grand appearance as initially planned. (In light of Michael Jackson’s death, the Laserium team decided to reprogram the instrument to feature his music set to debut next week.)

Still, Mick Fleetwood’s pre-show remarks helped me see Laseriums’s appeal. The show’s official spokesperson, Fleetwood waxed nostalgic on Laserium’s significance as a Los Angeles icon, noting, “what else is an old hippy going to be doing?” His comment made me think a little harder about the spectacle performed by Laser “rock stars” (technicians) and all those audience members cheering during high points in the show. I was impressed with the creative use of the 3-D laser projections criss-crossing over head like a high-tech security system during musical crescendos, and some of the shapes created with the lasers, such as the running man and the cash register, were visually stimulating. I just wish they had had more screen time than the rotating geometrical shapes. Laserium’s devotion to local charities, spearheaded by Marla Maples, is a good enough reason to go and form your own opinion. Who knows, maybe it will bring out the old hippy in you.