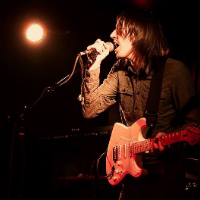 June brings the official start of summer. Celebrate by heading to a dark nightclub. Grab a spot in front of a big floor fan, order the coldest drink available, and enjoy a set by one of these acts, playing around Los Angeles in June.

Joel Jerome and Babies on Acid at The Echo (June 2, 9, 16, 23)
Jerome’s 2013 effort, Babies on Acid, dropped some of his psychedelic influences in vor of an AM radio, ‘70s folk vibe. But don’t be surprised to see both genres at work over the course of the month at the Echo.
Think: Hallucinating at a honky-tonk
Listen: via Soundcloud
Cover: Free

French Style Furs at Satellite (June 2, 9, 16, 23)
Comprised of two members of Cold War Kids and a member of We Barbarians, French Style Furs makes its Los Angeles live debut over the course of four shows at the Satellite. The band’s first album comes out in early July. Because of the members’ pedigrees, expect the shows to be packed.
Think: If Cold War Kids went back to the garage
Listen: via Soundcloud
Cover: Free

Nacosta at Silverlake Lounge (June 2, 9, 16, 23, 30)
The six-piece just returned from a national tour that took it from the Bowery Electric in New York to the Monarch in San Francisco and included several shows at SXSW. The band’s debut album, Under the Half Moon, came out in March.
Think: Psychedelic rock that would have been right at home in L.A. in the late ‘60s
Listen: via Soundcloud
Cover: Free

Not in the Face at the Viper Room (June 23 and 30, July 7, 14)
What started as a self-described joke of a cover band has become a dirty blues-rock foursome with plenty of original tracks. The Austin quartet may be playing the Viper Room, but it conjures the spirit of the Whisky a Go Go circa the 1960s and ‘70s.
Think: The jukebox selections at a particularly scary roadhouse along Route 66
Listen: via Spotify
Cover: $10

Huxlee at Hotel Café (June 6, 13, 20)
The singer/songwriter’s latest EP was released earlier this year, which is impressive considering that Caitlin Notey’s first show under that moniker was in only in August of 2013.
Think: A country/folk/pop hybrid descended from the late-‘90s Lilith Fair crowd
Listen: via BandCamp
Cover: $10

Omniflux at Hemingway’s Lounge (June 4, 11, 18, 25)
Mahsa Zargaran’s solo project got a chance to get its residency feet wet, opening for In the Valley Below on the last date of the duo’s May dates at The Echo. Now, Omniflux gets four dates of its own in the heart of Hollywood Boulevard.
Think: The heir to the Massive Attack/Portishead throne
Listen: via Soundcloud
Cover: Free

Moonchild at the Bootleg HiFi (June 1, 8, 15, 22)
Since the band released its second album, Please Rewind, in March, it has headed up and down the west coast on a mini-tour, gotten airplay on KCRW and the BBC and booked shows at the Montreal Jazz Festival for early July.
Think: The love child of D’Angelo and Amel Larrieux
Listen: via Spotify
Cover: Free

Until the Ribbon Breaks at the Bootleg HiFi (June 2, 9, 16, 23, 30)
The Welsh trio recently wrapped its first U.S. tour, as an opening act for Lorde. The band has been featured on NPR and thanks to studio help from Rollo Armstrong (one-third of pioneering U.K. trip-hop act Faithless) released two EPs.
Think: James Blake scoring a David Lynch film
Listen: via Soundcloud
Cover: Free