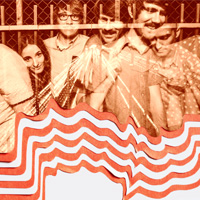 The grills have been tucked away, the fireworks have been set off, and the cheap beer has been drunk. July is a great month to float in your apartment building’s pool or lounge in a shady backyard, but it’s an even better month to get out of the house and see a show at a small club. The (mostly) free residencies in Los Angeles for the month of July include…

The Corners at the Echo (July 7, 14, 21, 28)
Coming off a West Coast tour that took it from San Diego to Seattle and back to L.A. for the Echoplex’s Lolipalooza festival, the band is working on solo material. When not recording together Billy Changer and Tracy Bryant found time to release a “split-solo” cassette in May.
Think: A surf rock band stuck in a garage, somewhere deep in a landlocked state
Listen: via BandCamp
Cover: Free

LA Font at the Satellite (July 7, 14, 21, 28)
Since releasing its debut album in 2010, LA Font has been featured on nearly every local radio station, acted as house band for Vice magazine’s monthly comedy showcase at Los Globos, and licensed tunes for Showtime’s House of Lies as well as a host of ads. This residency culminates with the release of a new vinyl single, “Teen Bazooka,” at the end of July.
Think: Power pop with an emphasis on power
Listen: via BandCamp
Cover: Free

Hi Ho Silver Oh at the Bootleg Hi-Fi (July 7, 14, 21, 28)
One of Echo Park’s favorite indie bands goes into this series of shows on the strength of its recent single “What Am I Doing,” which is from a to-be-released E.P. The band has been gigging around the southwest with shows in Arizona, New Mexico, and up and down the California coast.
Think: Our own private Grizzly Bear
Listen: via Soundcloud
Cover: Free

Island Apollo at Silverlake Lounge (July 7, 14, 21, 28)
After seven years of making music as the Bolts, the band changed its name on July 2. The newly christened crew is putting the final touches on an EP of music to follow 2013’s Wait ‘Til We’re Young.
Think: Polished pop-rock in the vein of Fall Out Boy
Listen: via Spotify
Cover: Free