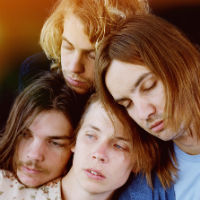 Ronnie Spector – Monday-Tuesday, Oct. 28-29
The iconic singer of The Ronettes brings her one-woman show, Beyond the Beehive, to Los Angeles for two nights. Expect an intimate perspective on her life as she intertwine stories and anecdotes with performances of her greatest hits. We chatted with the singer about why these L.A. shows mean so much to her.
El Rey Theatre: 5515 Wilshire Blvd., Miracle Mile; Tix: $52.

Tame Impala – Wednesday, Oct. 30
There’s no other band putting out such effortlessly perfect psych and dream pop. Tame Impala from Perth, Australia, released their second album Lonerism last October and landed on many 2012 end-of-the-year lists. The band is opening for the Flaming Lips at the Greek Theater on Tuesday before playing their own show with White Denim the following day.
Belasco Theater: 1050 S. Hill St., Downtown; Tix: $30.

Danny Elfman’s Music from the Films of Tim Burton – Tuesday-Thursday, Oct. 29-31
The Halloween season is the perfect time to catch Danny Elfman’s first live performance in the U.S. in 18 years. The last time Elfman was onstage here it was with his band Oingo Boingo. Having suffered irreversible hearing damage, he hasn’t performed much these last two decades. This show will include a collaboration with the Hollywood Symphony Orchestra and the Page LA Choir conducted by John Mauceri. Expect visuals to go alongside the renditions of tunes from The Nightmare Before Christmas, Edward Scissorhands, Pee Wee’s Big Adventure, Batman, Alice In Wonderland, Beetlejuice, and more.
Nokia Theatre: 777 Chick Hearn Ct., Downtown; Tix: $45-$250.