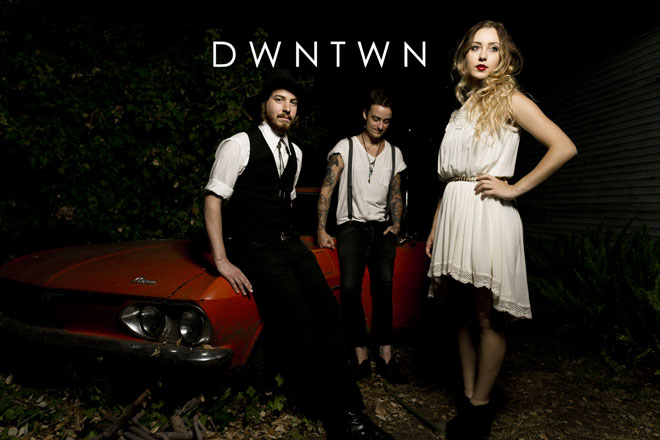 No desert drives, sunblock, hotel reservations or car camping passes are required to take in one of the local acts performing in L.A. clubs in the month of April.

Chief at the Satellite (Apr. 1, 8, 15, 22 and 29)
Evan Koga and Danny and Michael Fujikawa met in New York, moved back to their hometown of Los Angeles, released an album, and split up citing “creative differences.” Less than a year later, Chief reformed, with its core intact and still playing songs from its debut album, Modern Rituals.
Think: The opening band you hear in line while waiting to get into a Band of Horses show that makes you curse the traffic that delayed your arrival.
Listen: via MySpace

Hands at the Echo (Apr. 1, 15 and 22) and the Echoplex (Apr. 8)
With an album due out at the end of April on legendary indie label Kill Rock Stars, upcoming shows in the U.K., and a remix of a track by the Coachella-bound White Arrows, Hands may be ready for its close up.
Think: Dance music for indie kids with a combination of organic and synthetic elements custom made for sunsets at music festivals.
Listen: via Bandcamp

Great White Buffalo at Hemingway’s (Apr. 2, 9, 16, 23 and 30)
The L.A. quartet made waves at San Francisco’s Noise Pop festival in late February and is currently supporting a new, self-titled E.P. The band’s residency at Hemingway’s continues its tour of the city’s best watering holes, with shows at El Cid and Harvard and Stone in the recent past.
Think: Guitar-driven rock that’s ready to replace the Foo Fighters; perfect for long drives on open highways.Listen: via Bandcamp

David Poe at the Hotel Cafe (Apr. 1, 8, 15, 22 and 29)
Best known for his work on film and television soundtracks, Poe’s last album was the score to “Shadowland,” a performance work by dance troupe Pilobolus. That show has sold more than 450,000 tickets worldwide. Poe is, according to his Facebook page, currently working on an album of new material, some of which is likely to see the stage in April.
Think: The coffeehouse-ready song in the background when the hipster finds true love in your favorite indie film.
Listen: via Bandcamp

Gavin Turek at the Bootleg Bar (Apr. 1, 8, 15, 22 and 29)
Turek has been nothing if not prolific in 2013, releasing a mix tape in collaboration with DJ Com Truise and guesting on the debut album of Brainfeeder favorite TOKiMONSTA. Even with such a beat-focused team behind her, Turek seems equally at home in acoustic settings.
Think: If beat machines had soul.
Listen: via Soundcloud

The Wingard Manor at Club Los Globos (Apr. 1, 8, 15, 22 and 29)
This may be the only band outside of the Decemberists that could pull off a song with the title “Existential Motifs (In 20th Century Literature),” but unlike Colin Meloy and company they’ll make you dance. Mixing electronic dance music with heart-on-sleeve indie pop lyrics, The Wingard Manor make bodies move on dancefloors while also commanding attention on home stereos.
Think: A Postal Service remix of a Chromeo song.
Listen: via Soundcloud

Black Boots at the Redwood Bar (Apr. 2, 9, 16, 23 and 30)
There’s little available online from the Black Boots save a few stray singles and a Facebook page that mentions that the band got kicked off stage while performing at Cheetah’s. That’s punk.
Think: Garage rock with punk and surf influences, like the Pixies playing the Whiskey a Go-Go.
Listen: via Bandcamp

DWNTWN at the Central Social Aid and Pleasure Club (Apr. 2, 9, 16, 23 and 30)
The electro-pop of DWNTWN has already received praise from Spotify and Kitsune, the latter of which is including one of the band’s tracks on an upcoming compilation. The band’s cover repertoire reveals influences ranging from Bruce Springsteen to Calvin Harris not to mention an amusing reworking of Tyga’s “Rack City.”
Think: a more grounded, accessible version of Imogen Heap.
Listen: via Soundcloud

A throwback to a time when country music thrived in Los Angeles, Gleason has released four albums and an E.P. in ten years, including his latest effort Turn and Fade. His particular style of classic AM radio-friendly tunes melds Nashville with modern indie folk.
Think: The early days of Saddle Creek Records (Conor Oberst, Bright Eyes, etc.) with a more pronounced country twang.
Listen: via Soundcloud

Abbot Kinney at the Silverlake Lounge (Apr. 8, 15, 22 and 29)
No, not the neighborhood. Kinney is a singer/songwriter of a disposition so pronounced, even the bio on his own website describes him as “melancholic.” His eponymous album features power-pop and introspective balladry with little room for smiles.
Think: Serious arena-style rock for serious people.
Listen: via Soundcloud