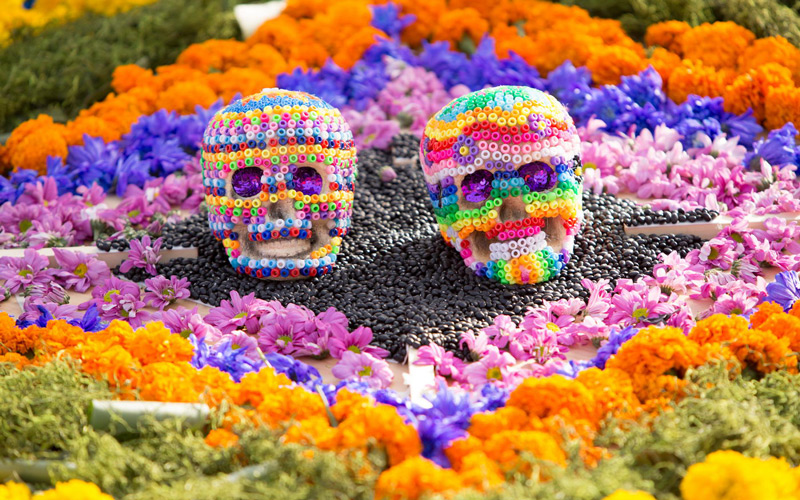 If you think of cemeteries as sad, quiet places, you’ve probably never been to the Day of the Dead celebration at Hollywood Forever Cemetery (6000 Santa Monica Blvd). On Saturday, Oct. 28, 2017, from noon to midnight, the cemetery will host its 18th annual Dia de los Muertos event. They’re expecting 40,000 people to experience the day of live music, dance performances, and art exhibits.

This year’s theme is The Legacy of Posada, in honor of Jose Guadalupe Posada, a Mexican artist and printmaker who created many of the calaveras images that we now associate with the Day of the Dead. Hollywood Forever will have a large exhibition of his original work, as well as work by artists he influenced and inspired.

Each year, members of the community build Día de los Muertos altars to honor the dead, and there’s a contest for the best ones. Winners of the best event-themed altar, the best traditional altar, and the best contemporary altar, will each receive $3,000. “There will be approximately a hundred altars from the community, and those could be for their family members, or different tragedies that have occurred in the city or the nation or the world, or anything that they may choose to do,” said Tyler Cassity, president of the Hollywood Forever cemetery and cofounder of the event. He said he expects to see many disaster-themed altars this year, adding, “It’s a year in which people really need to express and mourn together.”

The festivities include four stages with music and dance performances. This year’s main stage performers include Aterciopelados, Cuco, and Ximena Sarinaña. The full schedule is online. “We’re going to have hundreds of Aztec ritual dancers in their costumes, arts and crafts vendors, and food that represents the Mexican culture,” said Celine Mares, cofounder of the event. She describes it as “a feast for the eyes and the senses,” and says visitors will come away feeling enlightened about life and death.

Tickets are $20 ($120 for VIP access with free food, face painting, and more). Buy them in advance to avoid lines the day of the event. Día de los Muertos attire is strongly encouraged.

A Guide to Celebrating Dia de los Muertos in L.A.

How the Women Who Brought Día de Los Muertos to L.A. Carry on the Tradition

The 6 Best Things to Do in L.A. This Hallo-Weekend