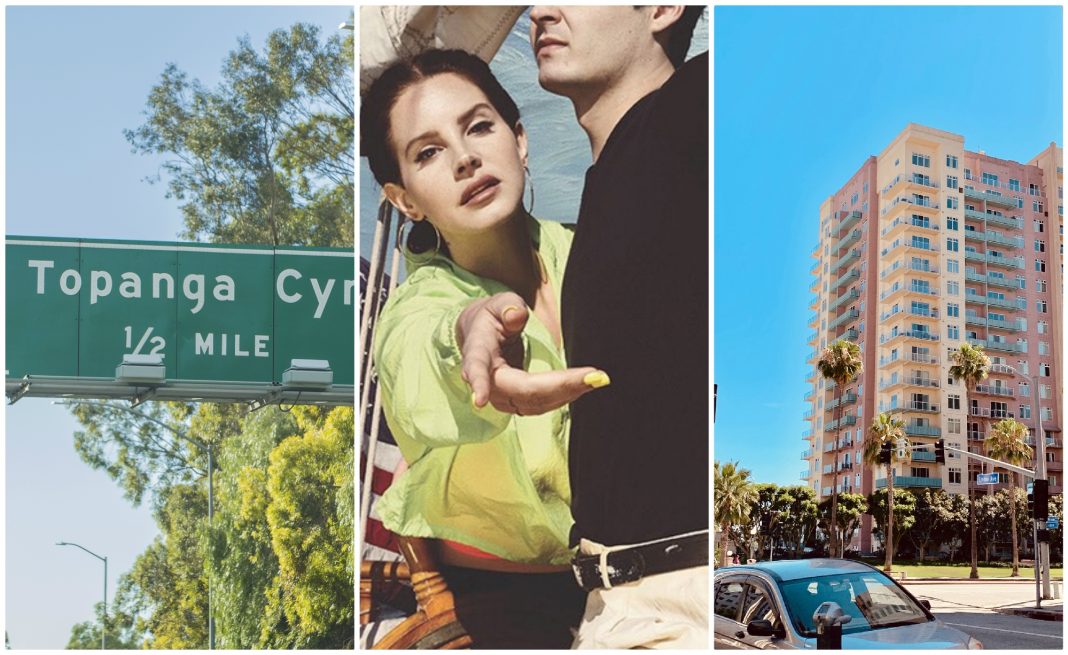 New York-born Lana Del Rey has always been enamored of the mythology of Los Angeles and California, but her most recent album—Norman Fucking Rockwell!—is perhaps the singer’s most profound ode to West Coast life and culture yet. Not only do the record’s melancholic, piano-and-guitar driven ballads take their musical cues from the pop and folk music of Los Angeles in the ’60s and ’70s, but their lyrics serve as a guide to its landscape, name dropping neighborhoods, nightclubs, and intersections from across the city. With so many L.A. references, it’d be easy for even the biggest Lana stan to miss a few, so we went ahead and mapped them all out for your convenience. You’re welcome, Venice bitches.

“All the ladies of the canyon / Wearing black to their house parties / Crosby, Stills and Nash is playing / Wine is flowing with Bacardi” –Bartender

The neighborhood of Laurel Canyon is a recurring motif on the album, as is the work of Joni Mitchell, who was involved in in the legendary music scene that blossomed there in the ’60s and ’70s. In NFR!‘s title track, Del Rey cites the canyon as the residence of an immature “man-child” that she seems to have a romantic (or at least sexual) involvement with, and croons about how he colors her “blue, blue, blue”—perhaps a reference to Mitchell’s most famous album. Later, in “Bartender,” Del Rey name drops Mitchell’s record “Ladies of the Canyon,” as well as Crosby, Stills & Nash, who were part of the same scene. In a 2017 Dazed interview, Del Rey said she “fantasized about Laurel Canyon” when she was living in New York and longing to start a band. She posted an Instagram of herself listening Mitchell’s music in March of the same year.

On the cover for the single version of this song, Del Rey appears to be standing in front of the Mariners Village Apartment Homes in Marina Del Rey. In an interview with BBC Radio 1 following the release of the single, the singer described the incident that inspired her to write it: “The song is about this time I took a walk late at night with a guy I was seeing, and we stopped in front his friend’s apartment complex, and he put his hand around my shoulder, and he said, “I think we are together because we’re both similar, like we’re both really messed up,” and I thought it was the saddest thing I’d ever heard. And I said, “I’m not sad, I didn’t know that’s why you thought you were relating to me on that level, I’m actually doing pretty good.” And he was upset, and that’s when I wrote the song.”

“Oh God, miss you on my lips / It’s me, your little Venice bitch” – Venice Bitch

Venice Beach’s urban-meets-nature aesthetic provides the perfect backdrop for this nine-plus-minute-long sad girl summer anthem, which is rife with nostalgic references to lighting fires in the yard, eating ice cream, and golden things “fading away.” Venice also happens to be home to a 50-foot-tall mural of the singer, which we’re sure will serve as inspo for many “Venice bitch” Insta posts moving forward.

“All the people in the dance will agree / That we’re well-qualified to represent the L.B.C.” -Doin’ Time

“I miss Long Beach and I miss you, babe / I miss dancing with you the most of all” -The Greatest

“Not a day goes by that I don’t listen to at least one Sublime song,” announced Del Rey when she first released her cover of the Long Beach band’s “Doin’ Time” in May. “They epitomized the SoCal vibe and made a genre and sound totally their own.” In the video for the track, a larger-than-life Lana traverses the landscape of L.A. in gladiator sandals and a breezy dress, stepping over freeways, sipping from downtown water tanks, and splashing in the ocean. Ironically, the city of Long Beach, which is referenced in both in “Doin’ Time” and later, on “The Greatest,” does not make an appearance.

Del Rey’s shoutout to this tree-filled neighborhood in the Santa Monica mountains echoes the lyrics in her earlier song “Heroin,” which appeared on 2017’s Lust for Life: “Topanga is hot tonight / the city by the bay / Has movie stars and liquor stores and soft decay.”

“It’s true, all the roads lead to you / Like the 405 I drive through / Every night and every day” –The Next Best American Record

This is perhaps the most romantic line on the album. As all real Angelenos know, braving traffic on the 405 freeway for someone is an act of the deepest devotion.

“There’s something that I never knew I wanted / We play the Eagles down in Malibu and I want it.” –The Next Best American Record

Del Rey name-drops yet another iconic L.A. beachside city in this verse. The singer, whose albums have all been laden with nautical references, has said that for her the ocean, open water, and boats symbolize “feeling free.” In 2015, Del Rey purchased a $3 million beachfront house in Malibu, reportedly to “free” herself from unwanted visitors and fans who had invaded her previous home in Hancock Park. Eventually, her Malibu home was invaded too, though, and she has since purchased a mansion in Hollywood.

Here, “Dennis” seemingly refers to Dennis Wilson, the Beach Boys member who drowned in Marina Del Rey at age 39 with a high level of alcohol in his bloodstream. While there’s no way to tell what bar he was drinking at on the night of his death, we’re going to take a wild guess that this lyric is referencing Chez Jay, a Santa Monica bar where the Wilson brothers were known to hang out.

The cities on the northern side of the Sepulveda pass don’t seem to factor into Lana Del Rey’s L.A. mythology very often, so this small SFV shoutout is much appreciated.

Stretching all along the coast of California, the dramatic, oftentimes dangerous Pacific Coast Highway is the ideal place to cruise while listening to Del Rey’s melancholic melodies. It was critical for her to name drop it at least once.

“Hollywood and Vine, Black Rabbit in the alley / I just wanna hold you tight down the avenue” –Happiness is a Butterfly

In the penultimate track on Del Rey’s album, she sings about going to the club in Hollywood and “just wanting to dance” with a romantic interest she isn’t sure is interested in her. In this verse, she croons about about one of the area’s most famous (or perhaps infamous) intersections, as well as the nearby Black Rabbit Rose speakeasy.

RELATED: Take a Tour of Once Upon a Time in Hollywood’s Filming Locations