Home Art Artists Transformed a South-Central Bungalow into a Shrine to the NBA Champ... 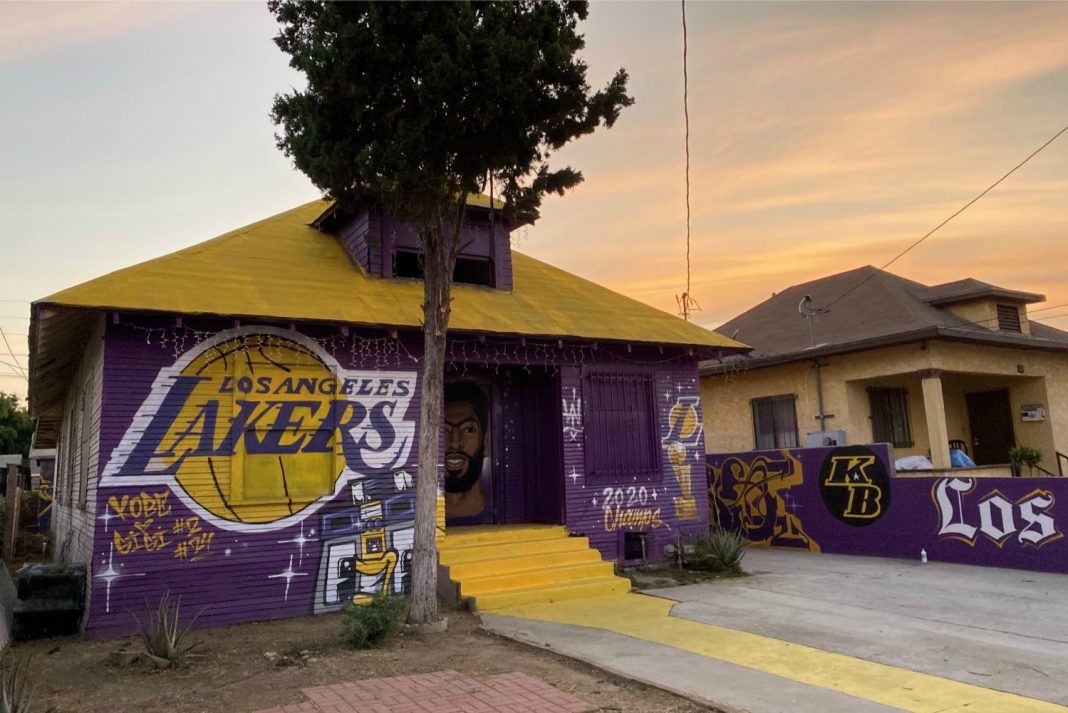 Hector “Tetris” Arias and a small group of artist friends spent the weekend painting the outside of a nondescript house on a quiet street in South-Central L.A. Instead of a cool grey or a subtle blue, however, they covered it in purple and gold, a combination known to every Angeleno as Lakers colors. On top of this background, Tetris and his crew painted the Lakers logo, the initials “KB” in honor of Kobe Bryant, and adorned the front door with a portrait of Lakers power forward Anthony Davis. This is no ordinary house. This is now the Lakers House.

This is not the first time Tetris has painted a house to honor an L.A. sports team. Two years ago, he converted a Mid-City residence on La Brea Avenue into the Dodgers House. Both of these houses were purchased by Irvine-based developer Alta Mira Realty, which allowed Tetris to paint murals on them while they were awaiting demolition. Sonia Ramirez of Alta Mira said it will probably remain a shrine to the Lakers for three to four months, until it’s demolished to make way for apartments.

Hearing that a developer is sponsoring a public art project may lead some to question their motives, and whether they are simply trying to whitewash—or “artwash”—their image. But Ramirez says she takes the community into consideration when planning these projects.

“We try to do something that’s going to be less impactful on the community, meaning we have to do something that doesn’t have a really narrow street,” she explains. “It has to have a good line of sight where people don’t necessarily have to come out, they can take a picture from their car,” a factor that’s become increasingly important in the age of COVID-19.

Although he was born in Michoacan, Mexico, Tetris and several of his friends working on the house all hail from Southeast Los Angeles, and have a connection to the area and its residents. When asked if he was concerned about taggers defacing his work, he didn’t seem concerned. “I talked to a few buddies and I told them that we’re going to be right here. So yeah, they’re gonna respect it.”

Although it may not be threatened by graffiti artists, the spectre of the wrecking ball still looms, a fact with which Tetris is also at peace.

“I can’t really have a feeling when I do murals,” he says of the project’s temporary status. “So this is just for the community and once I do it, I’m always aware that it has a life span, like how we do. So maybe it could be gone the next day.”

The house is located at 426 E. 30th St., South-Central. If you drive by, be respectful of neighbors.