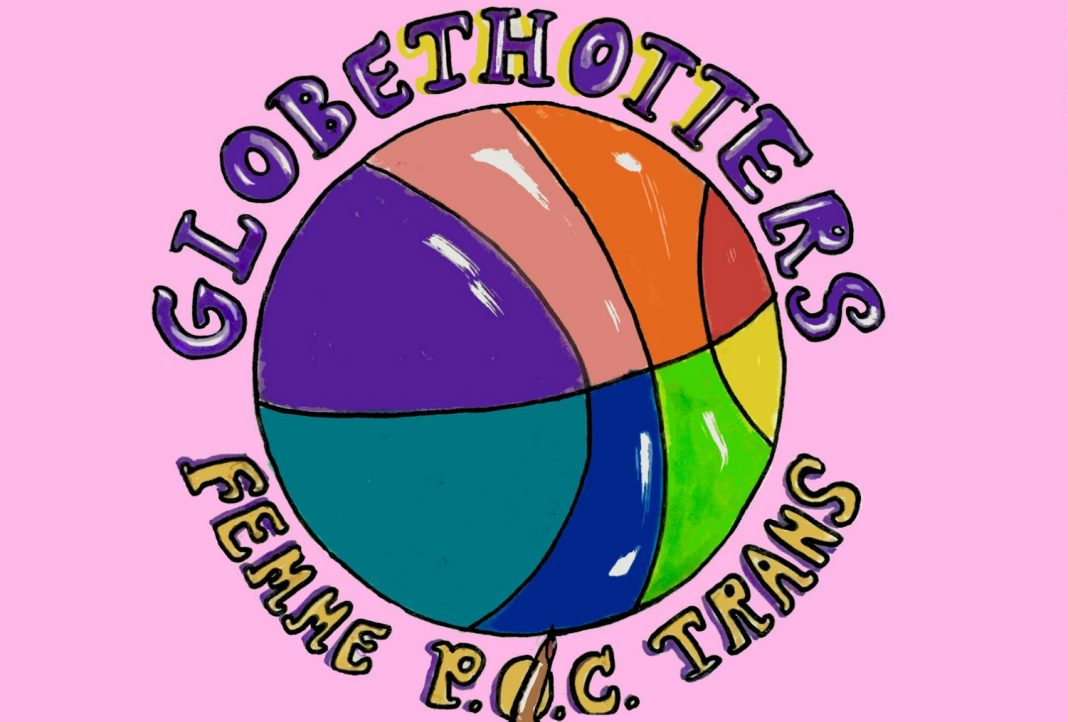 Local performance artist Keegan is a huge fan of the Los Angeles Lakers, but when she came out as trans, the way she interacted with the game of basketball changed.

“What I used to do was go to a bar or a local spot to see if the Laker game was on TV and watch it,” she says. “Now, that kind of act that seems so simple—to walk into a pizzeria and watch a Laker game—is so much more complicated because of the way we navigate the world as a trans person and being in a same-sex relationship and stuff. It’s that much more difficult. We found ourselves losing all touch with that type of space, so how can we make that space?”

Alongside creative partner and fiancée Smeza (the duo goes by Keegan & Smeza), they launched Globethotters, a periodic Lakers-centric event that combines basketball, art, and comedy, while also building a safe space for LGBTQ sports fans. The next event takes place at the Friend in Silver Lake during the Lakers-Warriors game January 21.

“We’ve been calling it a ‘queer Lakers viewing party’ in the broadest stroke. It’s open to all community members,” says Keegan. “We’re just trying to highlight and center the identities that we come from, too.” While Keegan is trans, Smeza identifies as queer.

In recent years, the NBA has made strides toward inclusivity. In the fall, the Lakers held their first-ever Pride Night, where they honored Jason Collins, the first (and so far only) player to come out while playing in the NBA. Keegan cites the actions of individual players, too, like Reggie Bullock of the Detroit Pistons, who has worked with GLAAD and recently made a donation to the organization in honor of his sister, a trans woman who was murdered in 2014. Even superstar LeBron James, Keegan notes, has shown support of trans women with a shoutout to the stars of the FX series Pose on Twitter. “People listen to that,” Keegan says.

While the NBA and players may be making the effort to reach out to LGBTQ fans, that doesn’t necessarily mean that the scene at sports bars is ideal. Smeza says that they can be “not the most friendly to different, diverse audiences.”

Keegan says she didn’t see much in-person activity amongst LGBTQ sports fans. “A lot of people our age all meet up, we rally together around cool stuff,” says Keegan. She wondered, though, “How can I get involved in the LGBT community and the sport of basketball?”

“There are a couple leagues where you can join and play basketball, but not everyone ends up playing the sport or wants to engage in it that way,” Keegan says. “There wasn’t really a lot out there for fan clubs or viewing parties”

They held the first Globethotters event at a venue in Hollywood for the Lakers season-opener. That time, there were no performances. Also, the Lakers lost to the Trailblazers that night. For Monday night’s event, they’ll mute the commentary and bring in background music. Their “halftime” performance will feature comedy from Brodie Reed, Tara McGorry, Theresa Bateman, and Jenell Randall. Artist Alber Nayib will provide visuals during commercial breaks.

“Live entertainment, like going to the Staples Center, is a little bit different. It’s a welcoming thing for everyone,” says Smeza. But, not everyone can go to games in person. Similarly, not everyone has access to watch the games at home. “We wanted to open up something that we really love combining, which is art and basketball, but (it) is also this space where you primarily focus on queer and trans and femme people and giving them a good time.”

She adds, “You don’t even always have to like basketball.”

RELATED: How an East Hollywood Coffee Shop Is Creating Space for the LGBTQ+ Community

Antitrust Liberals and Anti-Trans Conservatives Team Up Against Big Tech