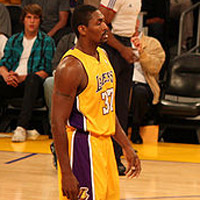 Last week we told you over at City Think how Lakers Luke Walton and Pau Gasol will spend the remainder of the NBA lockout (assistant coaching in Memphis and playing on an all-star team down-under, respectively). Well, it was announced today that defender Ron Artest will be busy too—with the samba, the cha cha, and the tango.

Artest has been cast for season 13 of Dancing With the Stars, along with reality star Kristin Cavallari, soccer player Hope Solo, legal analyst Nancy Grace, actor David Arquette, Chaz Bono, and others.

Artest, who has also tried his hand at stand-up comedy, has already counted himself out of the competition, telling Access Hollywood he “doesn’t have a chance” and expects Hope Solo will take the contest’s sparkly trophy.

We’re not sure what to think.