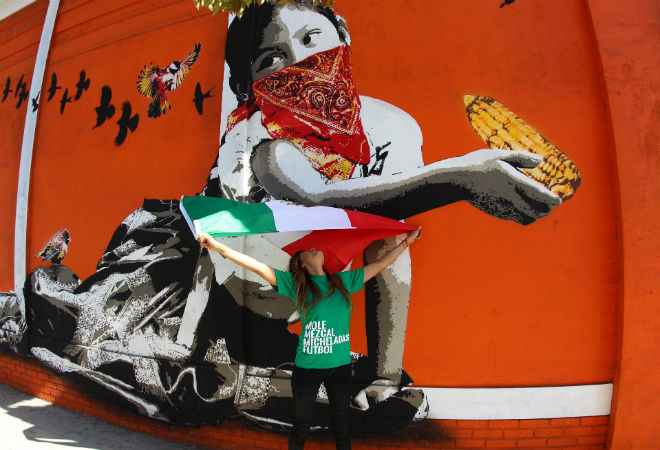 With World Cup fever spreading like the flu, it seems everyone is a “football” fan. For some, their knowledge of the beautiful game is limited to words like FIFA and “GOOOOOOOAAAAAL.” For others, it’s not merely a sport, it’s an obsession. These are the people who watch every game, memorize every stat, and fly around the world to see their favorite team. Los Angeles has its share of super fans; while they root for different nations, they’re united by their love of the game. Name: Bricia Lopez
Age: 29
Occupation: co-proprietor of Guelaguetza restaurant
What Team Do You Root For? Mexico

“I become a different person when I’m watching a game I am passionate about. It’s like the soccer Hulk in me comes out. I scream, I yell, I pull my hair out. I jump, curse, hit the wall, smash on the table. You name it, I do it.”

“I am loving the upsets in this World Cup. No one expected Spain or Portugal to get slaughtered they way they did. Nothing against them, I just like it when the previous world champion gets their butt kicked.”

“I’ve been a soccer fan since I was a child. Growing up in Mexico, you can’t escape the love for the game. This last game, I got so excited about Mexico’s goalie, I tweeted something that got me in big trouble with my boyfriend.” “I don’t think I ever had a conscious choice about whether to enjoy the jogo bonito. I was born and raised in London, so football was bred into me the way Texans love American football. Its fervor, passion, and faith all rolled into one tasty yet tortured mess.”

“When there’s a big Chelsea game, I put on my full kilt and the T-shirt of my favorite all-time Chelsea player, King Peter Osgood. Then I sweat bullets through 90 minutes of pulsating agony as I watch my team play. Remind me again why I so love this game.” “I was raised in Germany. My culture is soccer in German; it’s in my blood. I’ve never watched Germany play without wearing a jersey, and I always crack a beer before the kickoff so I won’t be late. A lot of people have asked what I’m going to do when Germany plays the U.S. I’ll be rooting for team USA. You’ve got to go with the underdog and the country you live in.”

“I played soccer until I was 35 years old. I started at AYSO, then I played club. I played in high school and college then went on to play semi-pro in four teams in California and Germany. I ended my career on a touring team representing the U.S. overseas.”

“Once I snuck my way onto the field, pretended I was a family member of one of the players, and celebrated with the Germany team. This was 18 to 20 years ago.” Name: Lisa Waugh
Age: 42
Occupation: administrative assistant for an investment advisory company
What Team Do You Root For? United States

“I started watching soccer during the last World Cup. I was struck by the athleticism, the physicality, and skill of these players. Also, it’s as simple as one ridiculous goal (see Robin van Persie’s first goal against Spain) or one awesome save. The game’s momentum is so fluid it can change by the minute. I have fashioned whole vacation plans around one soccer game.”

“These are exciting times for a United States men’s national team now that we’re in the Jurgen Klinsmann era. You get the sense that there’s a ‘fire in the belly’ with this team that’s been missing in previous years. Now we’re chomping at the bit to prove it on a world stage.” Name: Sam Nouri
Age: 38
Occupation: studio executive at Universal Studios/NBCUniversal
What Team Do You Root For? USA, Iran, and Brazil

“I became a football fan in 1994 when the U.S. hosted the World Cup. I call it football not to be a snobby hipster but, after all, everyone is playing with their feet.”

“I’m Iranian-American so I’m rooting for the United States, Iran, and the Selecao (Brazil) because I’ve always been a fan of the style of game they play.”

“This World Cup has had some wonderful upsets. Despite the corruption and issues around hosting it in Brazil, I love that it’s taking place where football is like a religion.” “I’ve been a soccer fan since before I was born. I root for Argentina and I usually take out my Argentina shirt and put it on when I watch games. I also like to wear white because I’m trying to look at soccer as a way of living in a world without borders and distance from people. I want to be able to use that to look at social activism and to represent everyone.”

“I want to see how Argentina can turn its game around and work as a team with all of these superstars. I want to see them play with heart and passion and really go for it. I just want to see beautiful soccer being played. If it’s from Italy, then I’m rooting for Italy (my mother would kill me).”

Name: Fernando Romero
Age: 30
Occupation: immigrant rights community organizer
What Team Do You Root For? Mexico, Argentina, and the Netherlands (in that order)
Where Are You Now? In Brazil to watch the World Cup

“I’ve been a fan for as long as I can remember. I’ve been playing since at least the age of 5; I grew up living it and putting in a lot of emotional investment. I still put my cleats on to play in amateur Sunday leagues. Football is my first love, the love of my life.”

“My favorite place to watch football is at the stadiums. If not, with my family and friends, particularly my brothers, who, like me, are frustrated footballers. About 10 years ago, Mexico had a friendly game in the Bay Area. My five brothers and I got together and made the trip from SoCal. My youngest brother at the time was in grade school. We showed up at his school, cited a family emergency, and took him with us to watch the game.”

Where to Watch the World Cup in L.A. (Even the Really Early Games)