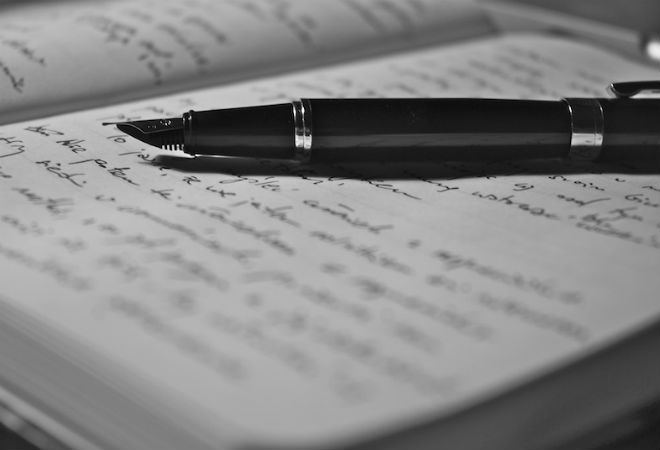 While Angelenos gear up for a punishing election to determine our next sheriff, there’s one city position that doesn’t rely on big money and mud-slinging: Poet Laureate of Los Angeles. The requirements? Looking good in a beret and writing odes to the city: “Silver Lake is a Thing with Hipsters,” “The Freeway Less Travelled.”

In all seriousness, the fact that L.A. is looking for a new Poet Laureate (Eloise Klein Healy was our first) is exciting. “Los Angeles is the creative capital of the world, and we’re eager to find a Poet Laureate to represent our thriving literary community,” mayor Eric Garcetti said when he announced the news program last week. “We invite all Angelenos to nominate noteworthy poets or themselves to spread their love of poetry throughout our city.” Nominations will be accepted until 4 p.m. on July 1, and the winner will be announced later in July.

Besides a fancy title, what does the position entail? Whoever wins the gig will receive an annual $10,000 stipend (for the duration of the term) and he or she will be tasked with promoting the literature and writers of L os Angeles. The term lasts for two years, from August 2014 to October 2016. During that time our Poet Laureate will have to lead at least six public classes or workshops at public library branches across the city and host six readings. The Poet Laureate will also compose poems to the city (“In Malibu did Kubla Khan a stately pleasure-dome decree…”) and act as a cultural ambassador.

We’re excited to see who the committee, appointed by Garcetti, chooses, but we have a few suggestions of our own.

Susan McCabe
A native Angeleno, she taught literature and creative writing in Oregon and Arizona before becoming a professor at University of Southern California. In addition to her work as a scholar, McCabe is the author of two stellar collections of poetry, Swirl (2003) and Descartes’ Nightmare (2008), which earned her the Agha Shahid Ali Prize in Poetry. As the title of the latter suggests, McCabe’s poetry is preoccupied with the split between body and soul, world and individual. She has a curiosity, almost a morbid fascination, with the inner workings of life. “What disturbed him, pleased him / was this corpuscular insect with its thousand eyes / for at last, there was a mechanism for breaking the world / into little mollusk-stained window panes.”

Douglas Kearney
Kearney, who teaches at CalArts, published his first full-length collection of poems, Fear, Some, in 2006. In 2009, he followed it up with the critically acclaimed The Black Automaton, which won the National Poetry Series award. The collection seamlessly navigates disparate elements of 21st century living, from technology to race relations, all of it describe by Kearney’s vivid language. Part of Kearney’s appeal is his expressive performance style and his visual approach to poetry; he often incorporates technology into his readings and supposedly composes his poems in Adobe InDesign.

Claudia Rankine
Rankine was born in Kingston, Jamaica but spent much of her life in New York City. She is currently a professor Pomona College where she teaches poetry. Rankine has published four collections; the most recent, Let Me Be Lonely: An American Lyric from 2004, earned here a great deal of recognition for its experimental nature. In it Rankine fuses essayistic writing with poetry fragments and images to achieve a sense of hybridity, wonder, and verve. Her much anticipated follow-up, Citizen: An American Lyric, will be out in October.

Maggie Nelson
In 2005, Nelson joined the faculty at CalArts, where she teaches literature and writing. She has four highly praised books of poetry under her belt and in 2011 was awarded the NEA Fellowship for Poetry. In her last collection, Something Bright, Then Holes from 2007, Nelson explores the boundaries between reality and poetry with a narrative voice that ties the whole collection together. Nelson’s poems operate on the outskirts of consciousness and reality, somewhere between this world and its underlying fabric.