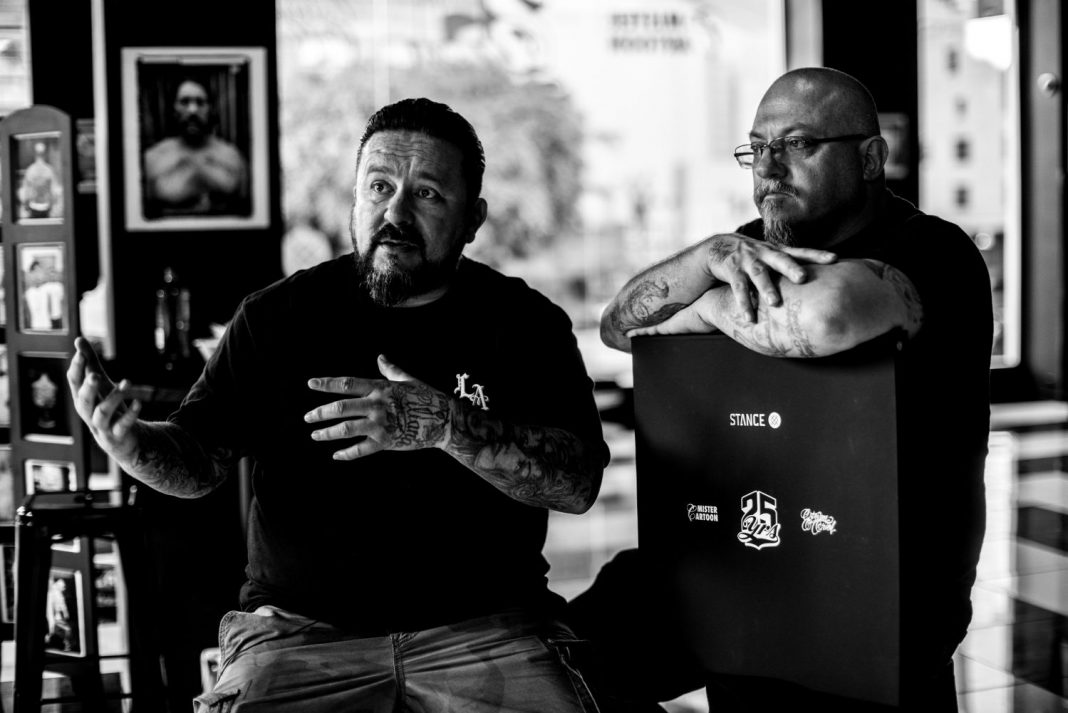 In the early ’90s, photographer Estevan Oriol and tattoo artist Mark Machado, better known as Mister Cartoon, were on separate creative trajectories. Oriol had gone from club bouncer to tour manager for the likes of Cypress Hill and House of Pain. Forever armed with a camera—a propensity inherited from his father, esteemed photographer Eriberto Oriol—he was capturing footage, both still and video, from the inside that world. Toons, meanwhile, was a graffiti writer and lowrider airbrush artist who began creating concept art and logos for musicians.

It seemed inevitable the two L.A. natives would meet, and at a record release party in 1992, they did. Oriol took Toons on the road with the groups whose tours he was managing, and Toons began inking everyone in his distinct fine-line, black-and-gray style, rapidly becoming a tattooist to the stars. Oriol documented it all from his singular vantage point with his unerring artistic eye.

Directed by Oriol, the new Netflix documentary L.A. Originals is packed with unfiltered, behind-the-scenes footage from as far back as 1995. Flipping back and forth between present and past, the story of their friendship and the duo’s enduring influence on hip-hop culture is told with the help of famous faces including Dr. Dre, Snoop Dogg, Eminem, 50 Cent, Nas, Travis Barker, Beyoncé, Ryan Phillippe, Dallas Keuchel, and Kobe Bryant.

In an interview with Los Angeles, Toons recalls his humble entry into the art world. “I started by stealing paint out of my old man’s garage, writing on my junior high’s walls,” he says. “My sister got me a job doing gang graffiti for movie studios. My mom would type up an invoice on a typewriter and they paid me.”

While art was the only job Toons had ever had, Oriol had all kinds of jobs. Upon meeting Toons, Oriol used his more broad experience and killer work ethic to lift up his new friend and creative cohort.

“I took all the knowledge I had from tour managing and applied it to both of us,” Oriol says. “I had a good relationship with magazines because I was shooting hip-hop. They would ask me for cool culture stories and I would bring up Toons. When they saw he was tattooing Goodie Mobb, Outkast, and then Eminem, it went crazy. They were doing ten-page features on us.”

As their work—including Oriol’s iconic 1995 image of the “L.A fingers,” in particular—made them ubiquitous presences in certain art circles, the duo launched the now-defunct SA Studios in downtown Los Angeles where they worked on collaborations with Vans, Nike, Stussy, Diesel, Toyota, and Rockstar Games.

When Oriol and Toons decided the time was right to turn the years of footage they’d accumulated into a narrative, they put together a trailer to show to producers. Brian Grazer picked it up, but instead made the 2016 scripted film Lowriders based on Oriol’s and Toons’ lives. L.A. Originals (originally called Ink) was paused until the rights were back in their hands. Underground Producciones’ Sebastián Ortega stepped in, and the now ten-year-old film was updated and ready to go.

Most stunning about their story is the way both men live and breathe the culture they channel in their art, preserving its authenticity even as they dipped their toes into drastically different worlds.

“We wanted to take Chicano art as far as we could take it,” says Toons. “Show our art to people that weren’t part of our culture and didn’t have access to it, let them see how we draw and what our style is. We didn’t expect to take it to the red carpet in Hollywood or major brand collaborations. One minute we’d be in the housing projects in Watts and East L.A., then we’d be having lunch at Fred Segal. It’s a hard to cross from one to the other. But the beautiful part that comes out of street culture, which could be connected to violence, poverty, incarceration, is the art form.”

RELATED: Meet the Guy Who Made “L.A. Fingers” a Thing

The Many Lives (and Names) of Chicano Icon Rubén Guevara

A Punk Rock Gallery and a Swanky T-Shirt Brand Battle Over the “L.A. Safety Pins” Design

A Peek Inside This Is Los Angeles, Estevan’s Oriol’s Latest Photo Chronicle of L.A.