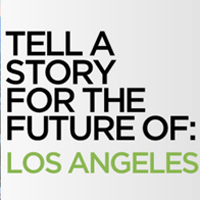 If you suddenly see people running all over the city with video cameras, there’s a good reason. On April 26, One Day on Earth invites anyone—and they mean anyone—to bust out a camera and point it at their community for “One Day in Los Angeles.” The project, which aims to capture the reality of life in L.A., asks Angelenos where they think their city is headed. The resulting clips will be spliced together for a television segment that will air towards the end of the year as one in a series featuring 11 major American cities.

Each participant is given 10 questions meant to inspire them: “What is the best thing that happened in your city today?” “What are your city’s biggest challenges?” Participants also have the freedom to go off-book and create a quandary of their own.

We spoke to Kyle Ruddick, founder and director of One Day on Earth. As a L.A. resident, he hopes the project will shine a light on the city’s diversity and unique geography. Although everyone loves to talk about their own neighborhood they, Roddick wants to prove that we are all “connected in a mutual future.”

Here are three things you need to know about the project whether you plan to participate or wait for the television debut.

1. Make it personal
According to Ruddick, the surefire secret to a great entry is to cover a topic you feel strongly about and are driven to say, “I need to share this.” It is also helpful to have someone speaking on camera who has equally as much heart as you do and will give dynamic and innovative answers regarding the stakes of the city.

2. The most important question you can ask is “What do you hope for the city in 20 years?”
Truth is, a lot of people become much more invested in the health and improvement of their city when they are forced to think long-term. Just bringing the idea of living in the same place in 20 years to someone’s conscience gets the wheels spinning. Ruddick, who has asked this question all around the world, says he has seen people’s eyes light up when they think progress is possible and will actually affect them.

3. You will see everything.
There is a great deal of interest in people filming at iconic places such as the L.A. River or Skid Row, but some of the most obvious daily occurrences will be featured as well. Ruddick confirms the final piece will include footage of babies being born since that happens each and every day. It won’t get to too graphic, though. “We want this to actually make it to TV,” laughs Ruddick. Nothing is too simple or mundane; if it speaks to you, film it.

Get more information on One Day on Earth and find out how you can participate.