Home L.A. On Screen A Brief History of L.A. Malls in Movies, Music Videos, and TV... 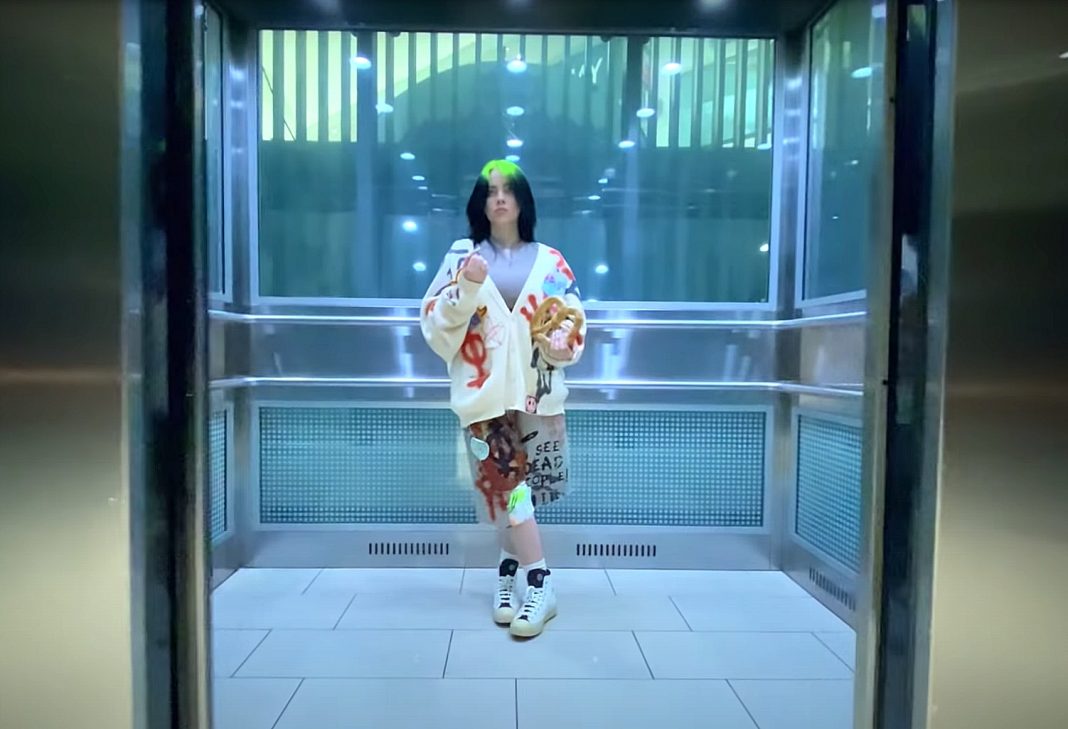 Where else can you pick up a warm pretzel, a glazed donut, bagged tortilla chips, and Hot Dog on a Stick lemonade and fries in less than five minutes? The mall, of course, and Billie Eilish’s newly released music video for “Therefore I Am” proves just that. In what comes across as a minimalist, pandemic-era fantasy, the pop superstar gallivants around the Glendale Galleria, after hours, grabbing up snacks from various fast food outlets.

A closed, indoor mall with limited cast and crew—as is the case in Eilish’s video—is perhaps one of the easier feats when it comes to filming inside a mall. Under normal circumstances, film crews often have to wrestle with mall management, and coordinate with each individual store and restaurant in order to achieve a working, on-screen mall. For Jackie Brown, the film’s location team negotiated with the Del Amo Fashion Center and its tenants for months. The production obscured business names for clearance purposes; paid storeowners to show up early to turn their lights on; they relocated an ATM machine from the middle of the mall, which then had to be watched by an armed guard.

Eilish’s new video inspired us to take a look back at some of the indoor L.A. malls that have hosted notable films, TV shows, and music videos over the last few decades.

Speaking of Santa Monica Place, the interior of the Frank Gehry-designed mall (prior to a complete renovation) can be seen as “The Galleria” where both the T-800 Terminator (Arnold Schwarzenegger) and the mimetic polyalloy T-1000 (Robert Patrick) track down John Connor (Edward Furlong) in Terminator 2: Judgment Day (1991). If you want check out the mall’s exterior where the T-1000 highjacks a semi truck, you’ll need to head up the 405 to the Northridge Fashion Center. 395 Santa Monica Pl, Santa Monica. 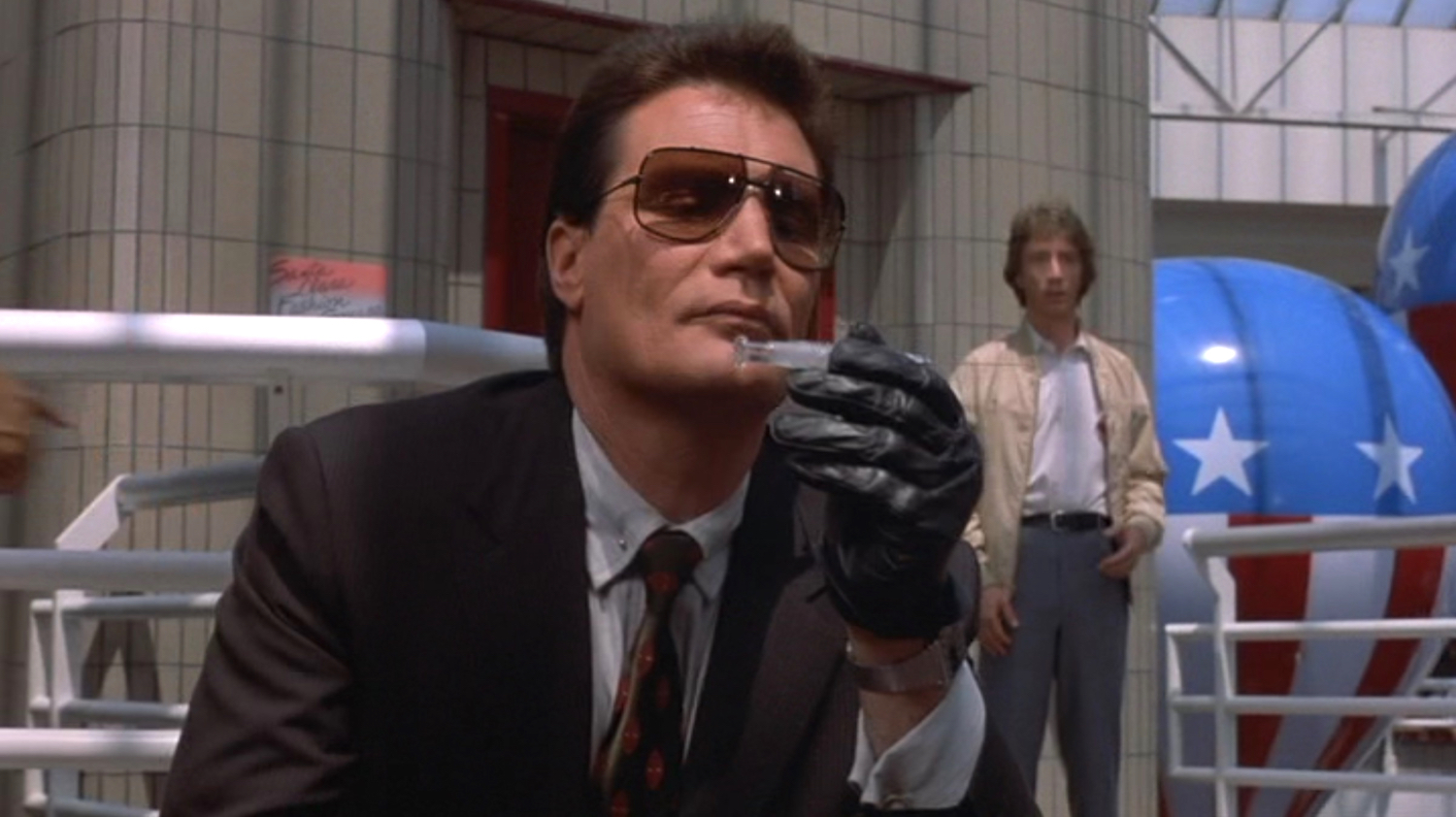 Based on advice from his doctor, hypochondriac supermarket clerk Jack Putter (Martin Short) heads to the Santa Clara Fashion Square mall to book a vacation with a travel agent. There, a distraught lab scientist hastily injects Jack with a serum containing the first miniaturized human being, Lt. Tuck Pendleton (Dennis Quaid). The San Francisco-area mall for Joe Dante’s Innerspace (1987) was filmed inside the Northridge Fashion Center before it sustained heavy damage in the 1994 earthquake. 9301 Tampa Ave., Northridge.

Tupac rides up onto the sidewalk, in his 1995 Jaguar convertible, outside Baldwin Hills Crenshaw Plaza in one of the most L.A. of all the L.A. music videos ever made, “To Live and Die in L.A.” (1996). Then Tupac heads inside where he’s joined by mall shoppers as he sings, “It’s the city of angels and constant danger.” The video was shot shortly before Shakur was killed in September of ’96. 3650 W. Martin Luther King Jr. Blvd., Crenshaw.

In the music video for Tom Petty’s Valley anthem, “Free Fallin’” (1989), Petty himself is the “director” leading us from location to location whilst perched atop a camera crane. In the video’s opening shot, we find ourselves outside the Westside Pavilion before a rotating crane shot dives into the mall’s yellow and blue tile scheme. Then, while strumming his acoustic guitar, Petty aimlessly rides the escalators and elevators as the sunlight pierces the mall’s vaulted glass ceiling. The interior section of the mall permanently closed in 2019 and is being renovated to house Google office space. 10800 W. Pico Blvd., West L.A.

An establishing shot has us believe that the mall in Clueless (1995) is the Westside Pavilion. Like, that would totally make geographic sense for Cher Horowitz’s (Alicia Silverstone) go-to mall. As if! The interior is actually that of the Westfield Fashion Square mall in Sherman Oaks. The “tell” is a scene about two-thirds into the film when Cher and Christian (Justin Walker) see Tai (Brittany Murphy) being carelessly hung over a second-floor railing by “some random guys she met at the Foot Locker.” 14006 Riverside Dr., Sherman Oaks.

The lynchpin location in Quentin Tarantino’s love letter to the South Bay, Jackie Brown (1997), is the Del Amo Fashion Center in Torrance. Simply called the Del Amo Mall in the film, the location shows up for over 30 minutes of accumulated screen time while the film’s characters con one another over a bag swap of $500,000 in cash. Multiple renovations and expansions of Del Amo render the interior almost unrecognizable as it appears in Jackie Brown, Valley Girl (1983), and Bad Santa (2003). 3525 W. Carson St., Torrance.

Originally opened as the Fox Hills Mall in 1975, Westfield Culver City shows up as a location in a few notable films. The final scene of Superbad (2007) between Emma Stone, Jonah Hill, Michael Cera, and Martha MacIsaac was shot there. Check out the location in 1985 as a Chicagoland mall in Girls Just Want to Have Fun and in Penelope Spheeris’s bleak, L.A. murder fable, The Boys Next Door. And the Fox Hills Mall is referenced in Boyz n the Hood (1991) as the workplace of Tre Styles (Cuba Gooding Jr.). 6000 Sepulveda Blvd., Culver City.

While Gilmore Girls spent most of its time on the Warner Bros. lot, the show branched out to dozens of practical locations around L.A. to create the small New England town of Stars Hollow, and beyond. One of those locations was the Burbank Town Center, which appears in a season four episode called “Scene in a Mall” (2004), in which Lorelai (Lauren Graham) and Rory (Alexis Bledel) spend some much-needed quality time shopping when they unexpectedly run into Lorelai’s mom, Emily (Kelly Bishop). The mall pops up again in season seven’s Christmas episode, “Santa’s Secret Stuff” (2007). 201 E. Magnolia Blvd., Burbank.