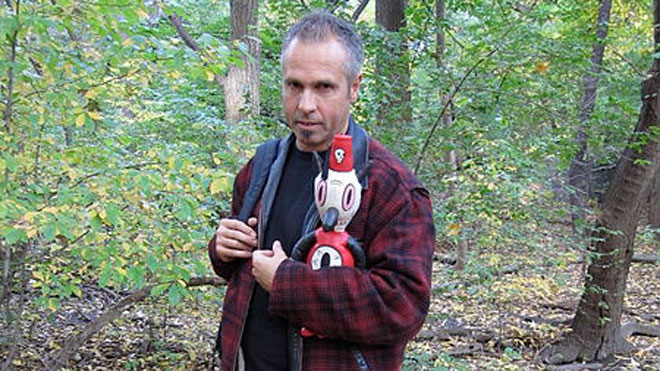 Gary Baseman started his creative life as an illustrator but he soon wandered farther afield, expanding his distinctive style into paintings, giant inflatable toys, an Emmy-winning cartoon, and even a board game (play any Cranium lately?). It all goes on display this month at the Skirball in The Door Is Always Open, a homey installation where Baseman invites visitors to get comfy and get creative. We spoke with him about how his family and his neighborhood influenced his art.

Where did the name of this retrospective come from?
My father with his strong Yiddish accent would repeat things to me over and over. One of them was “The door is always open.” He would always tell me no matter where I was in my life, or where I was traveling, or how I was doing, that his home was always my home. He died almost three years ago. I put that phrase on his headstone. The irony is, with my mom just passing, now is the first time that their actual home is no more. I want the audience coming in to know the creative door is always open, and that the only thing that’s keeping it from opening is their own insecurities, their own fears.

You’re an L.A. native, born and raised in the Fairfax District. What was it like growing up?
My mom and dad lived here for about 50 years. My dad was off working as an electrician and my mom worked at Canter’s in the bakery all day. I’m basically an accident. Even though I have two brothers and a sister, there’s part of me that’s like an only child. The first five years, I was part of this big family, and then after [my siblings] graduated high school I found myself alone. I think that was also part of why I spent so much time with art. In my earlier years, I had so much exposure to pop culture and teenagers, and then I found myself lacking that kind of stimulation. I think I found it in a pad of drawing paper.

Did you always want to be an artist?
I never studied art formally. I was actually a communications studies major at UCLA. I went to elementary school at 3rd Street here in LA, right next door to the old Art Center. Even though I’m a champion of the school now, as a child, I never even ventured inside. I would see these guys sitting under trees drawing cars, and all the art looked very airbrushed and slick, which is pretty much the opposite of how I perceived art. So I made the decision that art schools can’t teach you your style. I felt it was somehow important to go to a liberal arts university.

How did you develop your style then?
What I really try to capture is the beauty of the bittersweetness of life. That played a big role. When I tried to be perfect, nothing looked right. When I accepted my own vulnerability and frailty and awkwardness, that was when my style started really developing, probably in my mid 20s. When I went from trying to hard—well, I always try too hard. You end up killing the thing you love.

How did you segue from commercial art into fine art?
I moved to New York when I was 26, and I lived there for 10 years. I worked for every single publication, from the New York Times, to Time magazine, to Rolling Stone, to Entertainment Weekly, to little computer magazines, to The Nation, to you name it. I got 12 to 20 assignments every month for over 10 years. I was an art machine. I loved visual problem solving. But it did feel limited. I wanted to venture into other areas. Art to me is really important as collaboration. That’s when I started going into TV and had my series Teacher’s Pet. Or I do my vinyl toys. I collaborate with sculptors to help bring my vision across.

How did growing up as the child of Holocaust survivors affect you—or did it?
On the surface, I didn’t think so. They kind of took the burden of their past away from their children so they could concentrate on their lives. Both my mother and father’s towns were completely mass murdered in the war. I knew my grandparents were both dead. I knew my father was a freedom fighter, but I didn’t know any real details. But I also lived with this feeling that I needed to accomplish something in life—that somehow what they went through wasn’t necessarily in vain.

Do you see any of these themes playing out in your art?
The Skirball started asking me what my art has to do with my heritage, and my first answer was nothing. But the more I started looking at it, the more it started playing a very big role. My little ChouChous and Venison both take place in the woods. And I started realizing the only reason my mom and dad were able to escape was because of the woods. There’s deep forest wrapped around these little shtetls. If it weren’t for the woods protecting people who were escaping—if it was open field, they would have been caught and killed.

What’s the deal with Toby the cat? This guy shows up in your art all the time. He even travels the world like that gnome in Amelie
Toby has always been my alter ego. When I was drawing characters I would always draw myself as a cat. Growing up with Mickey Mouse and Felix the Cat and Saturday morning cartoons, that was a way to really create my own icon, but then I became an adult and used this icon in a much more adult way. I had a soul patch for many years, so he had a soul patch. The name Toby is actually based on a girl I was in love with as a child. Her parents were also Holocaust survivors and were best friends with my parents. Toby was the keeper of your secrets, and he was your best friend, and he loved you unconditionally.

So Toby is just this sweet childish icon?
A lot of the paintings had to do with gifting Toby. I used little girls as a sense of innocence. Toby had many girlfriends, but I gave them all the name Marilyn. Marilyn is actually the name of my very first girlfriend who I dated for four years at UCLA. Her parents were survivors also. If you look at the notion of Toby being gifted, you’re giving someone your… secrets. You’re passing a sense of your intimate self to another. A little kid can look at it and say it’s a funny cartoon. If you’re an adult, you can interpret that in a different way. But a child doesn’t need to — and they shouldn’t — until they grow up.

Do you consider yourself a Pop Surrealist?
I’ve always hated that term. A lot of my friends, like Mark Ryden, the Clayton Brothers, and Eric White, all came from commercial art and they may have tried to coin the term Pop Surrealism or Lowbrow. I love Surrealism. But real Surrealism had a different notion of what the human condition was all about. And Pop art came about in a different era of celebrating Pop culture and deconstructing it. So just taking those two and putting them together didn’t describe it. It made it trivial. For me, the strength of the art was our ability to maneuver different mediums. That’s why I wanted the term “pervasive”—or just “everywhere” art.

What is pervasive art, exactly?
It’s a term that works well within all this new media that’s being opened up. Everything has just expanded exponentially. For artists not to want to use every means to be able to express themselves would be silly. For me, trying to create boundaries of what is fine art and what is commercial art—by medium—is ridiculous. The value of this work is by the actual content itself, and the artist.

A lot of your exhibits have a common theme or set of characters. What is your starting point? How do you begin that process?
It’s what I do every day. It’s breathing, drawing in a sketchbook. From that I’ll start letting my intuition flow and just draw and not know what I’m putting down; then I discover meaning through that. From that, I start developing a theme or an understanding of what I want to talk about. Putting that theme together is when I start producing a body of work. I don’t necessarily think I’m creating some character or icon, but usually this one creature comes out that represents the exhibition. But it’s never done on purpose.