Home Art One of L.A.’s Most Iconic Chicano Murals Is Being Displayed in a... 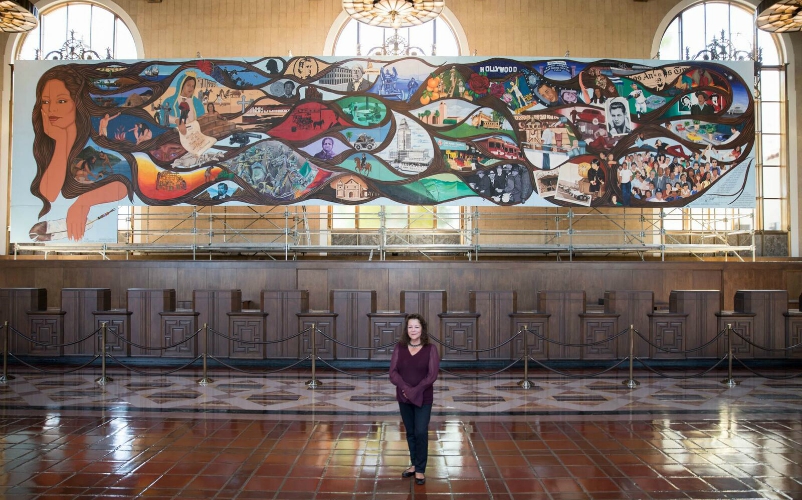 UPDATE: On August 1, the Natural History Museum announced that Sin Censura: A Mural Remembers L.A. will be on display through April 21, 2019.

On first glance, Chicana artist Barbara Carrasco’s 1981 mural L.A. History: A Mexican Perspective doesn’t look like the stuff of controversy. Originally commissioned for the city’s bicentennial, the mural consists of vignettes representing iconic events, people, and places in Los Angeles’ history, all tangled between the strands of a bronze-skinned woman’s flowing hair. The Hollywood sign jumps out at viewers, as do a bunch of oranges and the arched entryway to the Santa Monica pier. But upon closer inspection, it’s an unflinching look at events that shaped the city—both positive and negative.

“Carrasco also painted Sandy Koufax alongside Dodger Stadium, reminding viewers of the violent displacement of Mexican-American families that took place in order to build the facility at Chavez Ravine. Hank Leyvas, one of the youth wrongfully accused in the 1942 Sleepy Lagoon trial, also is represented.”

When Carrasco refused to censor the mural’s content to make it a more friendly celebration of civic pride, the project was called off by the city, and Carrasco has since stored the mural in Pasadena at her own expense.

It was briefly displayed at Union Station late last year as part of LA Plaza and the California Historical Society‘s exhibit ¡Murales Rebeldes! L.A. Chicana/o Murals under Siege, although there were several instances when the mural was shrouded under black cloth at the request of individuals who’d booked private events at the depot.

From March 8, 2018, through April 21, 2019, L.A. History will be viewable in its entirety once again beginning March 8 as the Natural History Museum of Los Angeles County presents Sin Censura: A Mural Remembers L.A. According to the museum, it’s the first time the full-length mural will be shown in a museum setting, “presented across three walls of an intimate gallery to bring visitors eye-level with the 80-foot panoramic work.”

“I am thrilled to see my mural on display at a museum where it will be seen by thousands of school children and visitors curious about our world,” Carrasco said in a press release. “I have many memories of my own visits to the museum in my youth and appreciate the ways NHMLA reaches diverse audiences.”