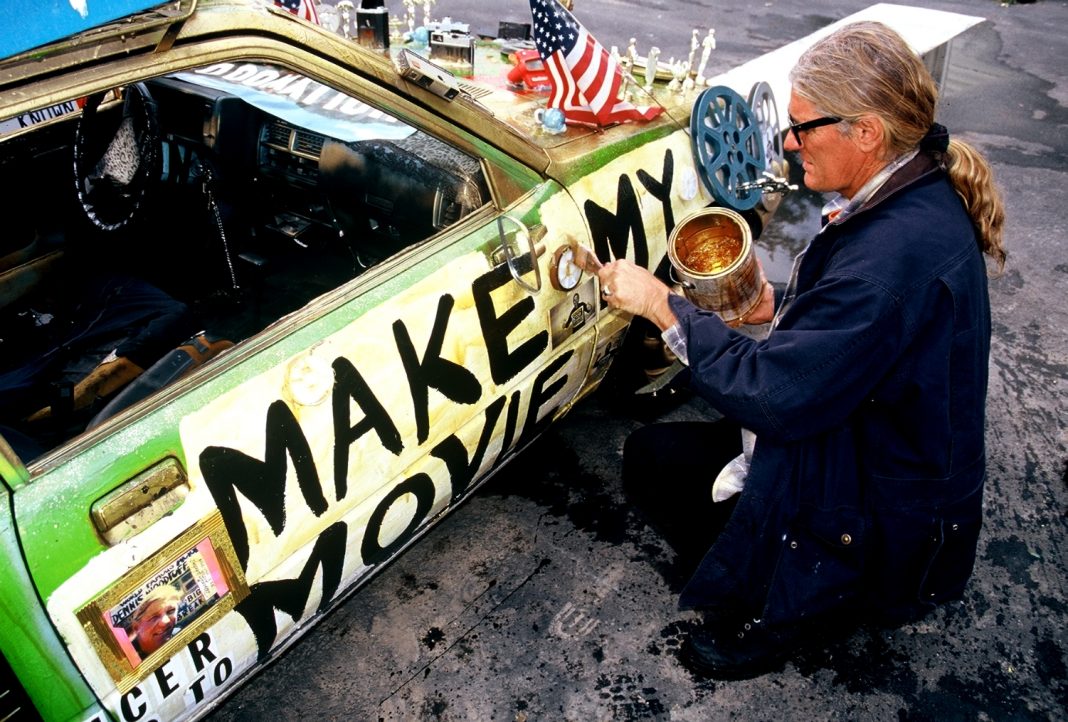 Los Angeles is home to some of the most famous people on planet earth. But, hey, they get interviewed all the time. In this new series, we focus on a particular sort of celebrity: people who are well known almost exclusively in and around Los Angeles. We call these characters L.A. Famous.

I first noticed Dennis Woodruff over 20 years ago, as I was pulling out of the Chateau Marmont with my hilarious novelist friend Bruce Wagner, and we saw a car parked across the street with a huge billboard on the roof that said “DENNIS WOODRUFF, FAMOUS ACTOR.” The car was plastered with plastic Oscar statuettes, film cans, 8×10 head shots, spinning lawn ornaments, and “BORN TO ACT” bumper stickers. The car was also covered with the messages “I AM LOOKING FOR WORK IN THE MOVIES; IT’S WHERE I BELONG,” and “I AM JUST AS HANDSOME AS TOM CRUISE.”

“You should date him,” Bruce suggested.

Woodruff’s phone number was repeated all over his “custom” self-promotional car, along with a blown up calling card with his number that said “Have you called me yet?”

The next day, Woodruff picked me up for our “date” at the hotel, showing up in a black T-shirt with big white letters that said “UNKNOWN ACTOR SEEKING HIS BIG BREAK.” The front desk called my room, wanting to know if they needed to call security.

During our date, Woodruff drove me around Hollywood, in what he called his “Batmobile moving sandwich board,” then gave me a tour of his “fleet” of hand-decorated art cars in Loz Feliz at his trailer court. “Madonna and I went out once,” he told me. “I drove her around like you. Except she kept getting out of the car and going shopping.”

So what’s become of Mr. Woodruff 20 years later? (He was in his 40s when I met him.) Did he become a Hollywood leading man? I recently spotted his car parked on Sunset (with vanity license plates that said “CAST DW”) and asked him for an update on his Hollywood dream.

How have you spent the past couple decades?

I have worked as an actor, director, and producer. I became a filmmaker and started by selling my movies from the trunk of my car. I have made more movies than Tarantino or anyone in Hollywood. I have made 29 movies, from comedy to sci-fi. I have been really famous. But I am ready to be taken seriously. Now I need to be in a big Hollywood movie. It’s still my Hollywood dream.

Do you feel successful?

I went from living in my car (I lived in a limo for a year; “the Yellow Submarine”) to now owning a small bungalow and condo from selling my movies. So I’m happy. A lot of people think I should have a star on Hollywood Boulevard, just for creativity.

What was the reaction to your self-made movies?

Ron Meyer [Vice Chairman NBCUniversal] bought a bunch of them and showed him to a group of his friends at his house. He told me he thought they were funny. Madonna bought a dozen of them and I had to drop them off at her L.A. office. Warren Beatty and Jack Nicholson bought them too and both said they liked them. Quentin Tarantino has my movies.

When I was first starting out, someone told me where Alfred Hitchcock lived, so I decided to knock on his door and drop my headshot off. He answered the door in a tuxedo. He was nice, but he never called me back.

Did you grow up in Hollywood?

Yes, my grandfather S.H. Woodruff was one of the three developers of Hollywoodland, where the Hollywood sign is, and what is now Beachwood Canyon. [Ed. note: Historical records indicate that S.H. Woodruff did not have any progeny.]

Did you ever get married?

We all need to find love. You always find it where you least expect it. I do believe in marriage and that we all have a soulmate. It almost happened. I have an $8,000 wedding ring that I’ll probably use if I find the woman of my dreams.

So what do you want to see happen now?

I have more experience and training than most people. So I would like to be given a chance to act in a major Hollywood movie. I’ve driven around Hollywood for years trying to get the attention of Hollywood studios, and now it’s time for them to give me my big chance and let me drive into the gates. I don’t want to be a spectacle anymore. I want to be the next Marlon Brando, if I had the chance. I really want to make it. I’m hoping someone big in Hollywood will help me realize my Hollywood dream.

Check out Woodruff’s entertaining movies at denniswoodruffshow.com. Thanks to Harrod Blank for use of the image; his film Automorphosis is streaming on Amazon Prime.

RELATED: The Hollywood Walk of Fame Has Been Named the Worst Tourist Trap on Earth

Meet Chaz Dean, the Man Behind the Iconic Eyeliner and Ubiquitous Billboards