Home Business We Went for a Ride-Along on a Cannabis Tour Through L.A. 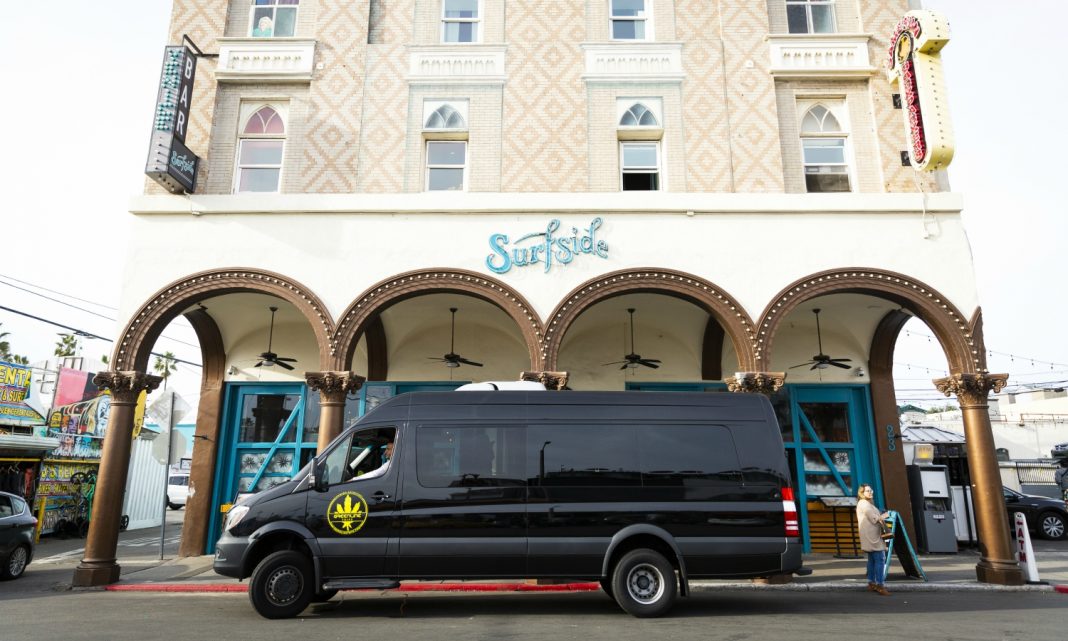 Tour buses are a ubiquitous presence in Los Angeles, from tinted-windowed vans navigating between celebs’ houses in the Hollywood Hills to the double-decker behemoths that shuttle Midwesterners up and down Hollywood Boulevard. Be prepared to see more with smoke spilling out of their windows.

Cannabis tourism isn’t necessarily new, but the industry has seen amazingly rapid growth as legalization has continued to sweep the country. As of now, 10 states and Washington D.C. have legalized recreational use of marijuana, and 33 states have legalized medical marijuana. Several politicians are now calling for decriminalization of weed at the federal level, including California senator Kamala Harris.

For tour operators in states with legalized recreational use, there’s money to be made. Colorado and Washington have each seen pot sales in excess of $1 billion since 2012, when marijuana became legal. In both states, businesses offering cannabis experiences, cannabis-friendly hotels, and cannabis-related activities have become popular with tourists.

Here in L.A., cannabis tour operators are hoping to see the same success. “At first, people were in disbelief that this could even be possible,” says Ed Legarda, founder of Greenline Trips, a Los Angeles-based cannabis tour company. “We started planning, getting licensing, permits, and insurance in 2017 so that we could launch our first tours the first day recreational cannabis was available for purchase in L.A.”

Believe it or not, Legarda says a big chunk of his business comes from L.A. and other parts of California. Even though recreational pot is legal in California, Prop 64 gives cities and counties the option to ban the sale of recreational marijuana, and some have done just that; only one in seven California cities allow recreational marijuana stores to operate within their boundaries. But even in L.A., where you can’t swing a cat without hitting a couple of dispensaries, locals still seek out the structure and camaraderie of a cannabis tour. “Some locals come to celebrate special occasions or to socialize with fellow enthusiasts,” says Legarda. “And others are comparing what SoCal has to offer.”

For the prospective canna-tourist, there are several L.A. cannabis tour companies to choose from depending on what they want to do and see. Greenline Trips offers various tours that take participants on weed-fueled adventures throughout the city. Each tour includes a ride on a luxury 420-friendly bus that’s private, legal, and insured. On weekdays, dispensary tours are coupled with visits to wineries and music events. For weed novices, Greenline also hosts a Weedology 101 tour, and for more experienced enthusiasts looking to further their knowledge, the Secret Sesh tour gives guests access to growers and lets them create their own rosin dabs.

Their most popular tour is their Cross Joint Combo Tour, which is actually two separate tours combined, taking riders to Marina Del Rey, Venice, and Santa Monica. Last weekend, we hitched a ride.

Guests first meet up at Marina Caregivers, a family-owned grow facility and boutique dispensary. There’s a tour the grow facility and an informational session on the process of growing some of their most popular strains; the walkthrough of several rooms full of marijuana plants in various stages of growth is pretty cool.

Next is a short walk to the dispensary located next door within the same building, and members of the tour are offered a discount.

After purchasing some goodies, guests hop on the luxe marijuanamobile. Since current laws allow people to smoke as much as they want in private, the bus provides a space for guests to get high before they go outside to their destination. The driver is completely sealed off from the passenger area of the bus so he’s able to stay totally sober during the tour. Which is nice.

On the ride to Venice, the tour host passes around freshly rolled joints, snacks, and water. The rotation of joints and bags of candy usually continues during the entirety of the ride. The host also makes sure to take proper safety precautions. “We keep water and CBD stocked so that everyone stays hydrated and level headed,” says Legarda. (CBD can be used to counteract the effects of THC, the psychoactive compound in weed.)

Upon arriving to the Erwin Hotel, the tour host guides guests to the rooftop bar, coincidentally named High Bar. Here, guests can purchase food and drink, as they’ll probably be getting hungry at that point. They’ll also enjoy the 360-degree views, a sight to behold, especially after hotboxing in the bus. They also have the option of going down to the Venice Boardwalk if they so choose.

After about an hour, it’s back to the weedmobile for more hotboxing while chill hip-hop music plays in the background and Pineapple Express plays on the TV screen (with the sound off and subtitles on). The bus will also be picking up more passengers who have purchased the latter half of the tour.

The bus then makes a stop at MedMen on Lincoln Boulevard in Venice. Guests can hop off to pick up more weed, or they can stay on the parked bus and continue toking.

Hop back on the smoke-filled bus, and relax while you drive to the Santa Monica Pier. During the ride, joints and snacks are still In constant rotation. Arriving at the pier, guests can take one last hit before heading out.

At the pier, guests are free to roam and enjoy the sunset views. (Locals: if you think the pier is only for tourists, try going when you’re super stoned.) For about an hour, you can check out the carnival rides, get some churros (or other food that tastes amazing when high), play a few carnival games, or just people-watch. It’s a great way to close out the tour.

“There’s nothing better than taking in a Santa Monica Beach sunset while enjoying cannabis with new friends,” Legarda says.

As the sun goes down, guests head back to the bus to ride back to Marina Caregivers for their final drop off. On the ride back, the music is turned down and the stoner movie is turned up. The joint and snack rotation slows down (and eventually stops) as guests prepare to return to a less stoney reality.

RELATED: The Best Cannabis Gifts for Our First Holiday Season with Legal Weed