Home Film 9 Movies That Will Help Scratch Your L.A. Baseball Itch Until the... 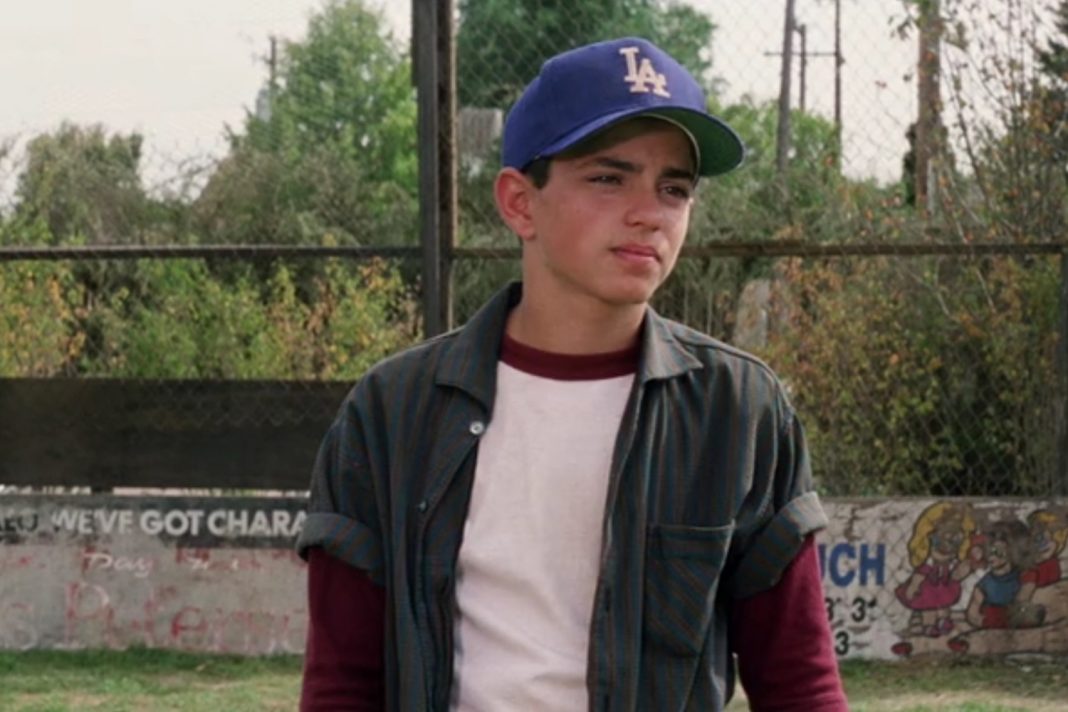 Where do we turn when we can’t turn to our tried-and-true pastimes? As we’ve done for more than a century during times of hardship, we can find comfort in the movies. With the start of the 2020 baseball season postponed, and MLB’s immediate plans uncertain, baseball films might provide some solace to fans anxious to be taken out to the ballgame. But whether or not you consider yourself a big-league devotee, from Damn Yankees to Field of Dreams, there’s probably a baseball film out there for you.

That being said, when seeking out your perfect baseball movie, you might be hard pressed to find a film that features your favorite team, unless your favorite team happens to be the Dodgers or the Angels. L.A. has a unique home field advantage in which geographic proximity to the industry that makes movies has resulted in our storied teams often appearing on screen.

Though we can’t make up for the savory satisfaction of a Dodger Dog or a Halo Dog, we’re pitching you nine films—one for each inning, of course—featuring the Dodgers or the Angels.

Not often do the subjects of their own biopics play the movie version of themselves. That’s one reason we chose The Jackie Robinson Story for this list over 2013’s solid Jackie Robinson picture, 42. Being that The Jackie Robinson Story was released just three years after Robinson became a Brooklyn Dodger, it largely focuses on the baseball legend’s early career in the Negro and minor leagues before donning his iconic #42 jersey. The acting style is a little stiff, and the chronology skips crucial points of Robinson’s military career, including a court-martial for refusing to sit at the back of an Army bus. However, Robison’s unparalleled speed and agility are on full display, making up for the film’s static aesthetic and missed story elements. The Jackie Robison Story presents snippets of Robison’s childhood in Pasadena prior to becoming a multi-disciplined star athlete at UCLA, where he meets his future wife, Rachel (Ruby Dee). Available on Amazon, iTunes, Google Play, YouTube, Hulu, Vudu, and Tubi.

When out-of-work magician Gilbert Wooley (Jerry Lewis) travels to Tokyo to join a USO tour, he unexpectedly becomes a shining role model for an unhappy six-year-old boy. While on a sightseeing trip, the unlikely pair spends part of the afternoon at an exhibition game between the Tonichi team and the newly anointed Los Angeles Dodgers. As the game plays out, Gilbert shouts the names of some of the team’s Brooklyn transplants including Duke Snider, Gil Hodges and “Pee Wee” Reese. Though the Dodgers appear in The Geisha Boy for only a few minutes, they received a guest star credit in the film’s opening titles. The game was shot at L.A.’s Wrigley Field, located south of downtown at Avalon Boulevard and 42nd Place. Built in 1925 and demolished in 1969, Wrigley Field had been the home of two Pacific Coast League teams: the Los Angeles Angels, who moved to Spokane, Washington, and the Hollywood Stars. A number of other baseball films were shot at Wrigley Field including The Pride of the Yankees (1942) and Damn Yankees (1958). When the Los Angeles Angels—a separate entity from the Spokane team—became a major league expansion team in 1961, they played their inaugural season at Wrigley. Beginning in 1962, the Angels shared Dodger Stadium for four seasons before moving to Anaheim in 1966. Available on Amazon, iTunes, Google Play, YouTube, and Vudu.

The last 22 minutes of The Naked Gun is a baseball movie unto itself, and we dare you not to shed a melancholy tear for L.A. baseball celebrations as Randy Newman’s “I Love L.A.” kicks into gear. When Queen Elizabeth II makes a stop in Los Angeles on her three-city American goodwill tour, corrupt corporate real estate developer Vincent Ludwig (Ricardo Montalban) attempts to assassinate the Queen at a baseball game between the California Angels and the Seattle Mariners. The only person who can stop Ludwig is Police Squad detective Frank Drebin (Leslie Nielsen), who gains access to the field by posing as a famous Italian opera singer (“Hey, it’s Enrico Pallazzo!) and a home-base umpire. Baseball pros making appearances include former Angels outfielder Reggie Jackson, former Dodger and Angel Jay Johnstone, and veteran umpire Joe West. You may notice that interior shots of the stadium don’t look anything like Angel Stadium in Anaheim—that’s because it’s actually Dodger Stadium. Available on Netflix, Amazon, iTunes, Microsoft Store, Google Play, YouTube, and Vudu.

Convicted car thief Jimmy Dworski (Jim Belushi) wins tickets to see his beloved Chicago Cubs face off against the California Angels in the World Series. After escaping from jail during a staged prison protest, Jimmy picks up and heads to Los Angeles. Arriving in L.A. at same time is advertising exec Spencer Barnes (Charles Grodin). When Jimmy finds Spencer’s indispensable Filofax on top of an LAX payphone, Jimmy assumes Spencer’s identity. Beloved L.A sportscaster, the late Stu Nahan, briefly appears in the film as an Angels reporter. Disney, a longtime Anaheim neighbor of the Angels, produced Taking Care of Business. When the company owned the Angels from 1996 to 2003, other productions from the studio, like Deuce Bigalow: Male Gigolo (1999) and Air Bud: Seventh Inning Fetch (2002), made use of Angel Stadium. Available on Amazon, iTunes, Google Play, YouTube, and Vudu.

Edward James Olmos plays Virgil Sweet, a scout for the California Angels. An ex-ballplayer himself, Virgil relies more on his gut than on a radar gun when judging talent. When the Angels organization is sold to a billionaire advertising CEO who doesn’t value traditional talent scouting, Virgil charges himself with finding the next baseball phenom before he loses his job. Upon discovering a kid with a killer fastball in a small Idaho town, things start looking up until the big business of baseball takes over. Appearing in the film as an Angels sportscaster is Ken Brett, who, in the late ‘70s, pitched relief for both the Angels and the Dodgers before finding his way into the broadcast booth for the Seattle Mariners and the Angels. Like The Naked Gun, Dodger Stadium doubled for Angel Stadium in Talent for the Game. The film includes what is perhaps the most stunning image of any film on this list: a field level shot revealing Dodger Stadium with the Angel logo obscuring the Dodger logo at the top of the park. Available on Amazon, iTunes, Google Play, YouTube, and Vudu.

Mountains surrounding twinkling city lights, California license plates, mid-century birdhouse ranch homes, and references to “the Valley” clearly place The Sandlot in L.A. Bookended at Dodger Stadium with a game between the Dodgers and the Giants, The Sandlot is actually more Dodger-centric than you might remember. Future Dodgers star Benny “the Jet” Rodriguez (Mike Vitar), leader of the ragtag baseball team that battles a feared neighborhood dog creature, dons a Dodger cap through the film. “Smalls” (Tom Guiry) moves to the neighborhood in the summer of 1962—Dodger Stadium’s inaugural year—when Dodger Maury Wills (who briefly appears in the film as the Dodgers’ third-base coach) broke Ty Cobb’s single-season stolen base record held for 47 years. Not only is Smalls an L-7 weenie, he’s “Oscar Mayer, even. Footlong! A Dodger Dog! A weenie!” Available on Amazon, iTunes, Google Play, YouTube, Starz, and Vudu.

A false promise leads Roger (Joseph Gordon-Levitt), a motherless foster kid with an absent father, to pray for the last-place California Angels to win the pennant. When the team gets a little bit of otherworldly assistance, Roger acts as intermediary between some baseball-minded angels and the team’s frustrated manager (Danny Glover). Disney’s Angels in the Outfield features one the most poignant figures of any baseball film on this list–Mel Clark (Tony Danza), a somber, washed-up starting pitcher whose life is literally entwined with his baseball career. Available to stream with TBS and TNT subscriptions.

Brooklyn Dodgers: The Ghosts of Flatbush (2007)

This two-hour HBO documentary takes viewers back to the Dodgers’ 1890 beginnings. The doc digs into the origins of the franchise name, the trajectory from a losing team to world champions, Jackie Robinson’s major league debut, and the team’s contributions to America’s post-World War II cultural landscape. The film primarily dissects the Dodgers’ Brooklyn years, but it touches on the politics that led to the team’s move to Los Angeles and the construction of Dodger Stadium. In a segment covering the team’s arch-rivalry with the New York Giants, it’s impossible to separate past from present. The documentary conveys a sense that the joys and heartbreaks of being a Dodgers fan are shared by generations of Brooklyn and L.A. fans alike, though separated by 3,000 miles and decades in between. Available on YouTube.

If you only watch one film on this list, take forty minutes to stream this shocking, yet heartening, documentary about Juan Catalan. In August of 2003, Catalan, a 24-year-old father, was arrested and accused of murdering a 16-year-old Sun Valley girl in May of that year. On the night of the murder, however, Catalan was at a Dodger game with his daughter, cousin, and a friend. Through a combination of Dodger Vision video and, of all things, raw footage from an episode of Curb Your Enthusiasm, Catalan’s attorney attempts to absolve his client of murder charges and a potential death sentence. Sad and haunting today are shots of an empty Dodger Stadium as Vin Scully’s voice echoes in the background. Available on Netflix