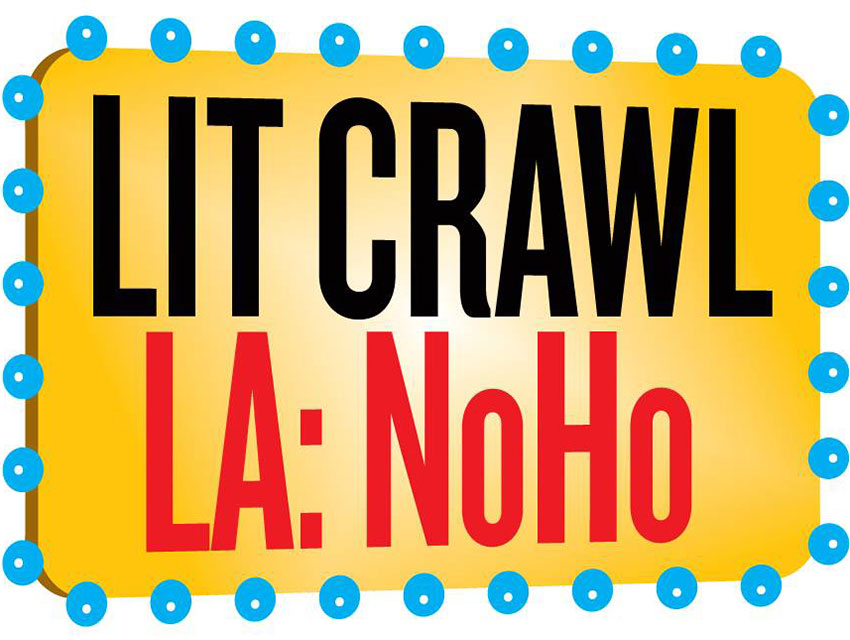 7:00 p.m. – My boyfriend and I walk up to Possch and a perky woman with her arms full of fliers hands us a sturdy four page booklet. Inside is information for each round of readings and a map of a mile-long stretch of Lankershim Boulevard covered with markers. We should have prepared better. Last year’s Lit Crawl had “only” 23 events at 12 locations, and it was packed. This year it’s more sprawling.

We pop into the closest building and over the next hour listen to readings from Annabelle Gurwitch, Peter Mehlman, and Stephen Tobolowsky. By 7:55 the store is packed with people sitting on the floor and leaning on shoe displays. When the applause dies down we realize we’ve missed 13 other readings.

8:00 p.m. – A small herd of people turn the corner looking for their next literary fix. You can tell they’re here for the Lit Crawl because their book bags feature silhouettes of authors and more than one of them wears a Ray Bradbury t-shirt. At Bow & Truss a reading by magicians from the Magic Castle has already started, but the restaurant is full of shouting patrons and only those closest to the reader can hear, so we move on.

A couple of doors down outside Tamashii Ramen a poet from Red Hen Press reads to a crowd on the sidewalk, but even the microphone can’t cut through the noise of the traffic, we keep walking.

Bookmobile, the interior of its bus packed with books from the L.A. Public Library, is parked on the curb and a woman asks passersby if they want to sign up for a library card.

We duck through bamboo walls and into the outdoor oasis of Kahuna Tiki where Los Angeles Times literary critic David Ulin is reading in front of a waterfall by the light of a tiki torch. The writers here have all written a piece about palm trees for the Crawl. We listen to a couple, but Kahuna doesn’t yet have its liquor license so we head to Republic of Pie. Inside an author from The Devastator is standing on a stage reading a hilarious “Choose Your Own Adventure” book while the audience shouts out whether they’d rather enter the empty video arcade and face the pirate ghosts or return home and die safely in their bed when they’re 70 years old, never having lived. We have yet to discover booze but this interactive reading has everyone cracking up, and we are still laughing as we grab our map and head outside.

9:00 p.m. – In the crowded Federal Bar, Los Angeles magazine film critic Steve Erickson stands behind a mic introducing readers from the CalArts literary journal Black Clock. The tables here are packed with diners who raise their voices so they can hear each other over the microphone. Servers struggle to get through the packed room to deliver food, and only those closest to the front can hear. We finally get a drink and wonder how long it will be before these restaurants realize they could be selling $5 drinks and cheap snacks to Crawlers who are on the move. But there’s no time to muse.

The next stop is Café at Art Institute of California for snacks made by the chefs and “anecdotes you’d hear at the most stimulating dinner party possible” from APM’s Dinner Party Download and L.A.’s Hot Dish reading series. McSweeney’s columnist Kent Woodyard reads hilarious mnemonic interpretations from his book, Non-Essential Mnemonics. Davy Rothbart reads a short story about touring for his book Found, compiled from letters people have found and mailed to him. Dinner Party co-host Rico Gagliano ends the night with a tale that has everyone laughing about accidently spending way too much money for sushi in Japan.

With that, the Lit Crawl is over. There were so many spots we didn’t get to. We pick our way through the people buying books and comparing stories, past a woman on the sidewalk reciting poetry to the beat of bongos. One thing’s for certain, next year this thing is going to be even bigger.