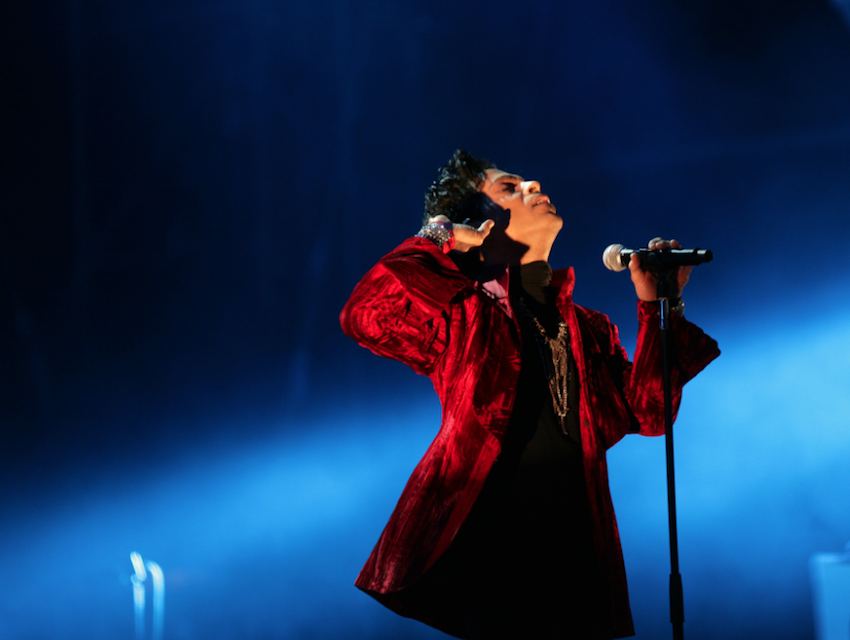 As I walked dazedly around Los Angeles yesterday, scanning every person’s face, attempting to register their level of devastation, I realized all I wanted to know was everyone’s answer to this essentially impossible, Sophie’s Choice-like question:

What is your favorite Prince song of all time?

So I asked random people on the street, called some of my friends, begged co-workers to stop whatever they were doing, and tell me. Here’s what they said:

Since yesterday I’ve had my Prince albums on repeat, but I keep going back to “7.” Which is so odd if  you know me now—a guy who makes his living with a deck of cards, often guessing people’s lucky numbers. But when I was growing up, “7” was just your classic upbeat pop song—if classic upbeat pop songs featured lyrics like “And we will see a plague and a river of blood / and every evil soul will surely die in spite of.” The stuff the song was talking about really blew my mind and kept me up at night, contemplating my existence. Was that what really happens? Was all the stuff I was taught in church correct? This was a time when I was trying to figure out my spirituality (or lack thereof). This song helped me put words to a lot of those questions. It was like spiritual Schoolhouse Rock. So when Prince died, everyone I knew from like high school and my early 20s, including two ex-girlfriends that I haven’t spoken to in years, messaged me with condolences, asking if I was OK. I’m pretty sad, but I’m OK.

I grew up and went to college in the Midwest. My first week, I got invited to a party thrown by theater majors who had their own off-campus apartment—these were my idols. They were playing Prince and crawling around on the floor pretending to be animals in this weirdly specific way that I would come to learn was called “animal work.” There was so much emotion and sex and what felt like honesty pouring out of the lyrics of that song. I didn’t know if a man or woman was singing, and I’d never seen the movie or the video, but I dropped to my knees and joined in. I felt like I had found my people.

The summer of 1984, I’d just graduated from college and was living in San Francisco, trying to pass as an adult in the spare bedrooms of a series of older friends, one of whom bought Purple Rain the minute it dropped. We had a ritual: Whoever got up first would drop the needle onto the first track. There was no staying in bed after that. “Dearly beloved,” Prince would say. “We are gathered here today to get through this thing called life.” Life—that “electric word”—was daunting at 21. I didn’t know who the hell I was or how to do any of the things I thought I wanted to do. “In this life, you’re on your own,” Prince told us, and that was becoming ever more evident, but he helped us force ourselves out into the scary world. Way back then, when Prince referenced “that shrink in Beverly Hills,” I never imagined myself living in L.A. But when I moved here six years later, I was still listening to Prince, still relying on him to get me up. Instead of asking that shrink “how much of your time is left,” Prince preached, “Ask him how much of your mind, baby / ‘Cause in this life things are much harder than in the after world.” For Prince’s sake, I hope he is right.

I was really young when it came out, and it sounded exactly how love should work to a kid. So he just liked her raspberry beret? And now they’re in love? That’s great! Now that life has crushed me, I know that’s not how it works. But every time I hear it, I can kind of remember what it felt like to be that happy and carefree.

I know it’s definitely not his most popular song, but “Batdance” brings back fond memories of the summer of ’89. Remixing Nicholson’s Joker quote (“Oh, I got a live one here!”) with that epic synth and electric guitar was very impressionable for a comic book nerd. I’m pretty sure I wore out the cassette tape that was playing in my Walkman, which was stashed inside my neon fanny pack.

My wife and I went to Vegas to see his 3121 show, and when it was over we wanted more, so we asked the door guy about buying tickets for the next night. He pointed us to the jazz club next door. Apparently, Prince was playing and tickets were only $20. We raced over to grab the 10th spot on line. His band opened with a funked-out version of Dizzy Gillespie’s”A Night in Tunisia.” Suddenly, we felt a presence behind us. It was Prince, armed with his guitar, just standing there and listening to them jam on that old song. He went around the room and met everyone. He was the most gracious guy imaginable. Then he took the stage and played until 6 a.m. He was gold.

A few months ago I had the privilege of attending a Princess show at the Troubador. Princess is Maya Rudolph and Gretchen Lieberum’s Prince cover band, and it was one of the best shows I’ve ever been to. The Purple One + Maya Rudolph + a whole lot of lamé = everything.

In 1992, everyone was already well aware that Prince was one of the most talented people who ever lived. Yet, he had the balls to remind us of what we already knew and took for granted. His name was Prince, and he was funky. It’s a song about being great by someone who realized exactly how great he was.

I was a bartender at a strip club for six years. I thought my dad wanted me to quit because no father wanted his daughter working at a strip club in any capacity. Turns out he wanted me to quit so he could return to his favorite lunch spot, which he promptly did. What could have ruined a father-daughter relationship actually bonded us in an unusual way: We had the same favorite stripper! He had been coming to see Tora for years. I was a huge fan of her charming interpretive dance to “Raspberry Beret.” Her raspberry beret, without a doubt, looked like the kind you find in a second-hand store.

It came out the same summer as the 1984 Los Angeles Olympics; I remember it like it was yesterday. It’s the first song I can remember turning on and just rocking out to by myself (I was seven years old). That infectious beat, those crazy synthesizers—the whole thing was just bananas to a young person’s ears. I’d never heard anything sound like that. It just made people wild.  I play the song for our kids all the time now, and they completely freak out to it exactly the same way I did then. I love it. We played it real loud on our family’s spring break road trip a few weeks back and I almost had to pull over because everyone was going insane.

I was really little when I first heard it, and I just remember wanting to dance to it all the time. I also stole my mom’s VHS copy of Pretty Woman and felt like Julia Roberts singing “Kiss” in the bathtub was exactly what it must be like to be a grown up.

Tim Burton’s baroque, deranged 1989 Batman was as transformative to my eight-year-old brain as a hit of acid. No scene was more traumatic (we need a word that means “a good traumatic”) than when the Joker and his goons trash the museum to Prince’s “Partyman.” I was only vaguely aware of who Prince was at the time, and as far as my reeling senses could tell it was the Joker himself singing on the track. The outré horn stings and slap-bass were funkier than the heartland snooze-rock of John Mellencamp that was constantly playing in my home. Prince was destroying my bourgeois, childish paradigms as the Joker was splashing green paint all over the Mona Lisa. Of course, I grew up to be a comic book and television writer rather than an androgynous funk-god, but it was close.

I was this super weird kid and beyond feeling like all of Prince’s music was written just for me, his lyrics were so deliciously bizarre and moving—they gave you a feeling before you knew what the hell he was even talking about. And there’s this line in that song that he partially speaks:

“Well, I ordered ‘Yeah, let me get a fruit cocktail, I ain’t 2 hungry’ /
Dorothy laughed /
She said: Sounds like a real man to me. You’re kinda cute, you wanna take a bath?” /
And I said: Cool, but I’m leaving my pants on, cause I’m kind of going with someone.”

I swear I had never heard anything more profound in my life.