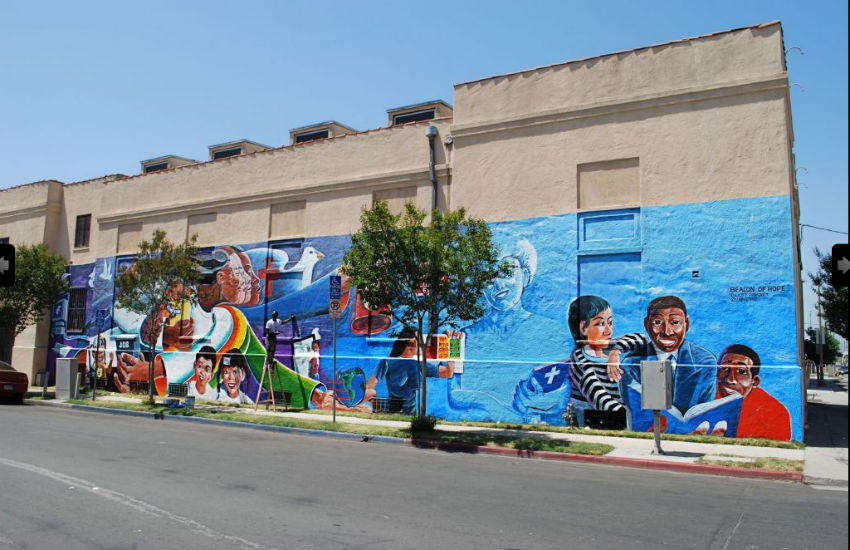 If you haven’t heard of the Mural Conservancy of Los Angeles (MCLA), it’s time that you two get introduced. You may have driven past the beautiful Olympic murals circa 1984 when you were stuck in traffic on the 101 and noticed that they were freshly spiffed up. That’s a really big deal, considering that Cal-Trans was formerly buffing them in gray paint to save them from the elements. Take a look at MCLA’s website to see exactly how involved they are in the street art game.

WHO: Eric Bjorgum has been on the MCLA board for three years, so he certainly knows all about the needs of Los Angeles residents who are passionate about art. Along with executive director, Isabel Rojas-Williams, MCLA is making strides including raising money so that local youth can help clean up tagged walls; They recently did this with David Choe’s memorable mural downtown. It is a great form of community involvement and a way to take pride in one’s neighborhood.

WHAT: The picture that you’re looking at is the result an MCLA restoration of a 2002 Elliott Pinkney piece which happened in 2013 with the help of Patrick Henry Johnson. Before MCLA’s involvement, the piece was in complete disrepair. Now it is every bit as powerful as it was when it first came on the scene in 2002. It really takes a village, and thankfully Bjorgum completely gets that.