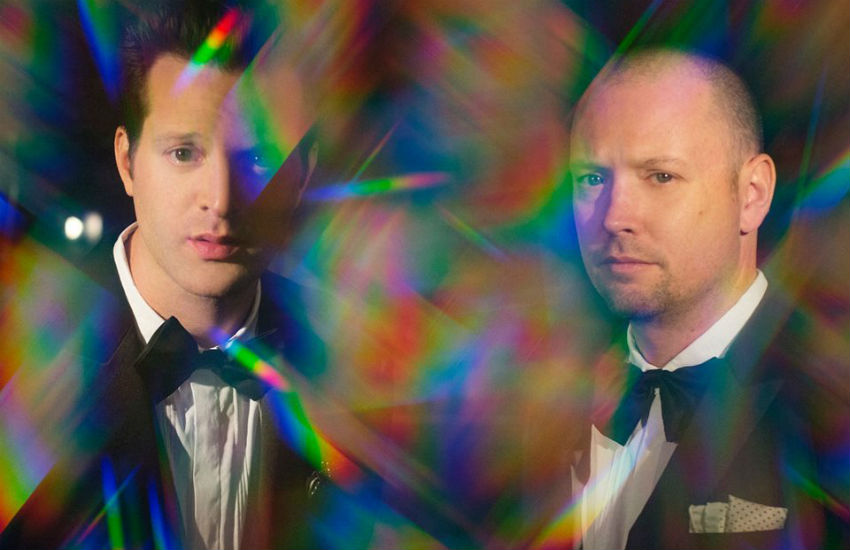 Funk duo Tuxedo, composed of Jake One and Mayer Hawthorne, lays the funk on thick, singing smooth peanut butter and jazz songs that will most definitely get you swaying. “The whole thing is about the groove—that was the number one concern,” says One about their self-titled debut album set to be released by Stones Throw Records on Tuesday. One, who has produced songs for such hip-hop royalty as Chance the Rapper and Kendrick Lamar, teamed up with Hawthorne, the Grammy-nominated soul singer, in the 2000s after trading mixtapes, and they’ve been accumulating collaborative tracks ever since. They released an EP over Soundcloud and their song, “Do It” was sampled by Pitbull in his song of the same name.

We talked with Tuxedo about all things funk; their history with it, its current renaissance, and Hawthorne’s spot-on childhood impersonation of Michael Jackson.

★  One and Hawthorne connected when they exchanged mixtapes. “I just remember when we exchanged those mixtapes, thinking to myself, ‘Holy Shit, I can’t believe there’s someone else in the world who cares about these songs, these particular records’,” Hawthorne says. “I was familiar with Jake’s work, but when he sent me those first couple of boogie tracks, I was like—I didn’t even believe it was him. I was definitely blown away by that.”

★ Not only does Tuxedo’s history stretch back, but the duo’s love of the funk classics—as well as the RnB—that shaped this album reaches back even further. “It’s just something I grew up on,” One says. “[Michael Jackson’s]The ‘Off the Wall’ album and stuff like that, it’s really the first music I can remember.”

★  “I remember doing my own Michael Jackson concerts in my bedroom for my family,” Hawthorne muses. “I had the white sparkly glove and everything. I was living that life. And then later, I was in a funk band, sort of like a jazz-funk trio in high school”.

★ Having longtime claims to funk, One and Hawthorne are one-part annoyed, one-part enthusiastic about the recent funk renaissance that has witnessed Daft Punk and Mark Ronson playing with the sound of the late ‘70s, early ‘80s. At one point, all the funk related activity got One’s goat. Rather than be excited about it, he says, “I more felt like damn they beat us to the punch.”

★ “It’s the only music to me that is really happy and makes you feel good—but it’s not soft. It’s really tricky to do that,” says One. “A great funk song is not cheesy and it’s not soft but it will bring joy. It’s just funny, you know. I don’t listen to other music that way. If you can achieve that feeling others are just going to follow. Something like [Bruno Mars’s] ‘Treasure,’ that song just feels good.”

★ For Tuxedo, the appeal of funk has nothing to do with the current moment. It’s just about returning to the groove that was always there. As Hawthorne says, “Funky music will always come back into style.”

Tuxedo is throwing a release party for new album at The Regent Theater on Wednesday at 8 p.m.

Gold Line In Highland Park is an L.A. Take on Japanese Vinyl Bars

Capturing the Fleeting Glory of the French House Music Scene