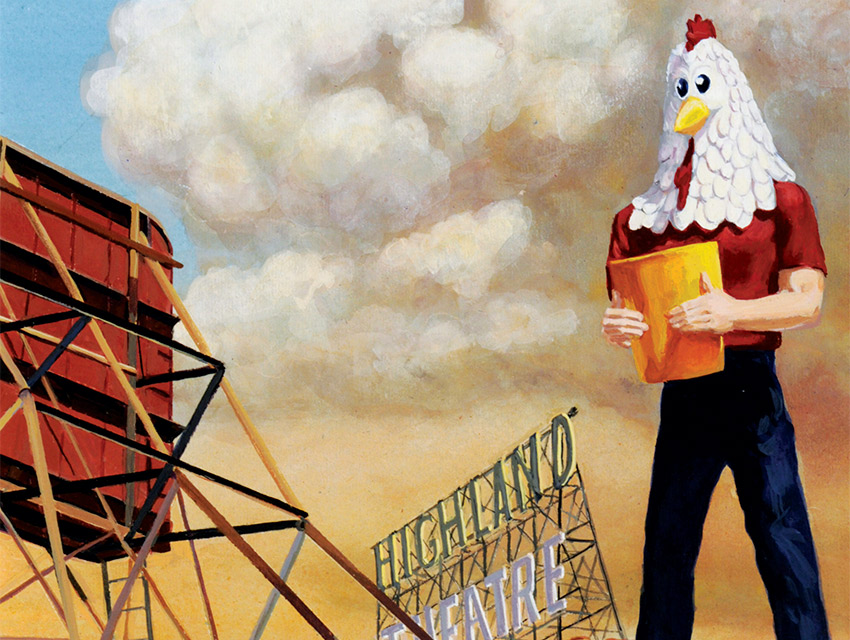 Fowled Out: Number 56 in "100 Not So Famous Views of L.A. features the Chicken Boy statue above Figueroa Street in Highland Park. Painting by Barbara A. Thomason

Los Angeles is awash in depictions of fiery sunsets, crashing waves, and palm trees set against flawless skies. Franklin Hills artist Barbara A. Thomason’s homage to the city flaunts a less tidy ethos. Over the course of four years, the master printer created a series of paintings devoted to the vistas that define L.A.—the heron gates on the L.A. River, the exterior of the Chinatown restaurant Hop Louie, and the dapper, mallet-wielding figure on Silver Lake’s Western Exterminator sign. At once dreamy and down-to-earth, the 9-by-14-inch canvases, which Thomason began in 2007, were inspired by One Hundred Famous Views of Edo, Hiroshige’s celebrated series of 19th-century Japanese woodcuts. “I wanted them not to be postcards,” Thomason says of her pieces. “I wanted to see the real L.A., where there are weeds climbing up poles.” Later this month the works will be reproduced in a book, 100 Not So Famous Views of L.A. (Prospect Park Books), and shown in an exhibition at Angel City Brewery. Rendered with the lush texture of early-20th-century California plein air paintings, the images are romantic yet filled with tension, capturing the familiar in a way that makes you see things in a whole new light.

10 of Barbara A. Thomason’s Favorite Views of L.A.