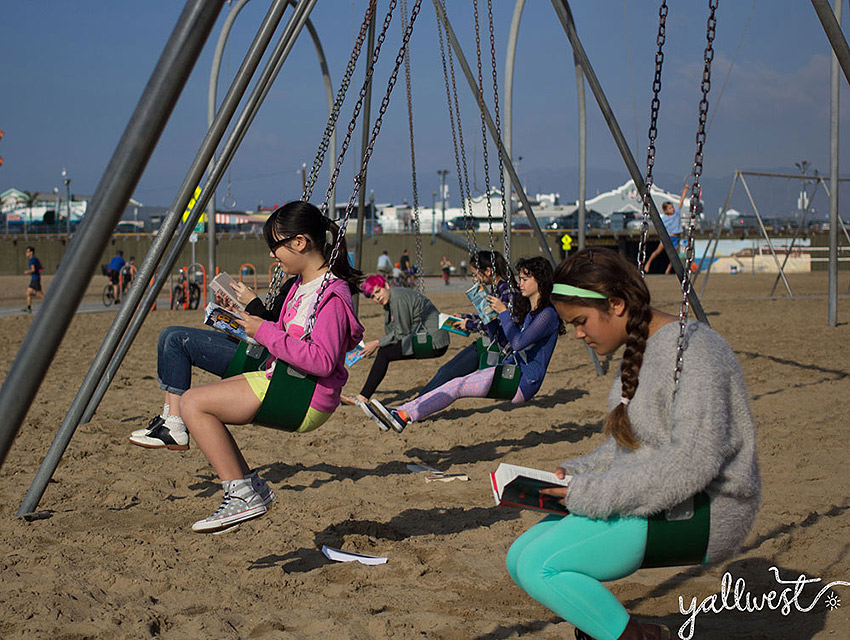 Neil Gaiman Storytime at Vroman’s
(April 4)
It is never too early to start reading the work of good authors to your kids, and this Vroman’s event is the perfect opportunity to do so. On Saturday, there will be a story time reading of Gaiman’s Fortunately, the Milk, a wacky tale of time travel and cereal, with a snack (of cereal—what else) to accompany the reading. Kids ages 6-10 will be able to use the story as fuel to write their own imaginative story after listening to the book. More information.
Cover: Free

Moby and Gene Baur sign Living the Farm Sanctuary Life at Skirball Cultural Center
(April 9)
Musician and animal rights activist Moby will be in conversation with Gene Baur and Gene Stone, the coauthors of the new book Living the Farm Sanctuary Life: The Ultimate Guide to Eating Mindfully, Living Longer, and Feeling Better Every Day. The talk will be moderated by our own Intolerable Foodie and Time magazine writer Joel Stein and will focus on veganism and living an animal-friendly lifestyle. More information.
Cover: Free, but RSVP is requested

YALLWest in Santa Monica
(April 11-12)
With YA adaptations like Twilight, The Hunger Games, & The Fault in our Stars driving sales at the box office, it’s safe to say the genre isn’t going anywhere soon. This two-day event, which includes panels, book signings, food trucks, and music, celebrates all things Young Adult and features a stellar lineup of authors. Veronica Roth (the Divergent series) will be participating in several panels, along with Ransom Riggs (Miss Peregrine’s Home for Peculiar Children), Marie Lu (the Legend series), Leigh Bardugo (The Grisha Trilogy), Marissa Meyer (The Lunar Chronicles), and many more. More information.
Cover: Free

T.C. Boyle at Bergamot Station Arts Center
(April 14)
T.C. Boyle will be in conversation with Susan Orlean (The Orchid Thief) to discuss his latest novel, The Harder They Come. This release, which marks his 25th book, was inspired by recent events in the news and tells of a 70-year-old Vietnam veteran who must navigate the psychotic break of his delusional son. More information.
Cover: $20 general admission

L.A. Times Festival of Books at USC
(April 18 & 19)
It’s the biggest book event in the nation, and it’s free—so truly, you have no excuse to miss out. The list of authors who will be in attendance this year is both enormous and exciting; panelists include Malcolm Gladwell, Joyce Carol Oates, Hector Tobar, Meg Wolitzer, Jonathan Lethem, Aimee Bender, T.C. Boyle, and more. As in past years, there will be an assembly of various stages including a children’s stage with readings and shows. Pass the time between panels strolling walkways of booths selling books and literary memorabilia. And of course, there will be food trucks. More information.
Cover: Free

Sarah Gerard reading Binary Star at Stories Books & Cafe
(April 23)
Sarah Gerard’s raw first novel, Binary Star, keeps finding itself on lists of the best books of 2015. Published by the small, family-owned publisher Two Dollar Radio, Gerard’s debut tells the story of a girl struggling with anorexia through a stream-of-consciousness writing. Fans of traditional plots and narratives may be skeptical, but stop by the reading and see what it’s all about. More information.
Cover: Free