Oil Can Harry’s, known for its retro and country-western vibes, was the oldest gay club in L.A., operating in Studio City from 1968 until it became a casualty of the COVID-19 pandemic in January 2021.

To the patrons who frequented the 52-year-old historic gay watering hole, which was renowned for its Friday night country line dancing and Saturday night disco parties, it was more than a bar or a dance club. It was a safe space.

“It was a community. Throughout all these years, that’s where people met their boyfriends, made new friends,” says Rick Dominguez, 56, who was the club’s resident DJ since 1993. I attended hundreds of weddings of gay couples who met at the club.”

The club’s early days coincided with the dawn of the LGBTQ civil rights movement and sexual revolution. It also was the days of Donna Summer, Thelma Houston, and Gloria Gaynor, whose disco hits caused many fanny bumpers on the dance floor.

In Los Angeles and the Valley, people felt freer and safer frequenting a gay space not located in an out-of-the-way industrial area or down a dark alley and hidden behind a nondescript door.

“During the 1970s and 1980s, it was superstardom with lines of people up the street,” says Tommy Young, 60, who worked at Oil Can Harry’s for more than 34 years, including 25 years as manager. “People would call asking what was a good time to arrive, and we would say, ‘Get here by 9 p.m. or you won’t get in.’”

If those walls could talk, they would share more than five decades of history. Instead, we asked longtime employees to share seven things people may not have known about Oil Can Harry’s.

According to historian Mary Mallory, the parcel at 11502 Ventura Boulevard has been a hotspot for nightlife going back to 1936, when Rex’s White Cabin, which served food and had dancing, operated there. In 1939, the Everglades debuted on the site, and in 1941, Zomba Cafe, an upscale burlesque theater, opened its doors.

Bert Charot bought it in 1967 and opened Oil Can Harry’s in 1968. “Bert knew the woman who owned Zomba Cafe,” Young says. “She lived upstairs from the club, and Bert said she had these huge cages filled with doves.”

Charot, who identified as gay, was nicknamed Sonny Bono because he looked like the singer-actor.

“Everybody thought he was Sonny Bono,” Young says. “There was a resemblance. People would say, Is Sonny bono here?”

At one point, Charot and his brother, nicknamed Mouse, also owned two other Oil Can Harry’s locations: San Francisco and Cathedral City.

“Bert and Mouse collected a bag of names that people had written down. They took five names out of the bag and put them into a bowl and shook it up,” Young says. “The name they selected was Oil Can Harry’s. It sounds corny, but it’s true.”

The name of the character in the logo is Oil Can Harry, with his signature stovetop hat, handlebar mustache, and tuxedo.

“He was always described to me as a villain,” Young says. “He’s like the villain Dick Dastardly in Wacky Races, who had a little dog Muttley. It was based on a character like him.”

The Front Door Had a Peephole

Oil Can Harry’s front door had a peep hole that, back in the day, let people see if the Los Angeles police were trying to come in and raid the place. In the 1960s and ’70s, Los Angeles had an ordinance that made it illegal for same-sex couples to dance together.

Also, a siren inside the club was used to warn patrons if the police were about to enter the building.

“In the early days, you rang the doorbell, and people would look to see who it was. You couldn’t just walk into the club,” Young says.

“Mainly, that was for the police. If the person at the door looked and saw the police, they would signal to the DJ, who would turn on the siren, which also had a blue light,” Young says. “People would then change partners or stop dancing together. Everybody knew what was going on.”

By the time Young worked at the club in 1986, Los Angeles had abolished the ordinance and police raids had stopped. But the siren was still used.

“While everyone was dancing to Donna Summer or country line dancing,” Young says, “they would play the siren to celebrate having a great time.”

During the HIV-AIDS Epidemic, the Bar Played Host to Important Fundraisers

During the 1980s and ’90s, as the virus ravaged the gay community, Oil Can Harry’s hosted numerous HIV fundraisers. Charot, and later his business partner Bob Tomasino, who eventually took over the bar, were committed to fighting HIV-AIDS.

“There were so, so many people who died. They were in the middle of it all,” Young says. “Not only were customers getting sick and passing away, so were the staff. It meant a hell of a lot to them.

“They felt this was their mission to do,” Young adds. “They didn’t want their names put into the mix. They didn’t do it so people would say, ‘Oh, aren’t they nice.’”

Tomasino took over Oil Can Harry’s in the mid-1990s and owned it until he died in 2013 at the age of 66. His partner, John Fagan, owned Oil Can Harry’s until it closed this year. “Bob Tomasino was one of the most kind and generous men I’ve ever met,” Young says. “He was dedicated to the cause. If you needed something, he would find a way to get it.”

The Bar Was Once the Site of a Protest

In the early 1990s, ACT Up protested at Oil Can Harry’s because lesbian patrons said the club’s manager at the time was hostile toward them. Young says the accusations had merit: “[He] would tell me, ‘Don’t smile at the women. Don’t say goodbye or thank you.”

“We had a huge protest at the bar. ACT Up was there, everybody was there,” he says.

When Charot, the club’s owner, became aware of the situation, he stepped in. “Bert heard about this and said, Tommy, keep doing what you are doing. You will not be fired,” Young says. The manager was let go. 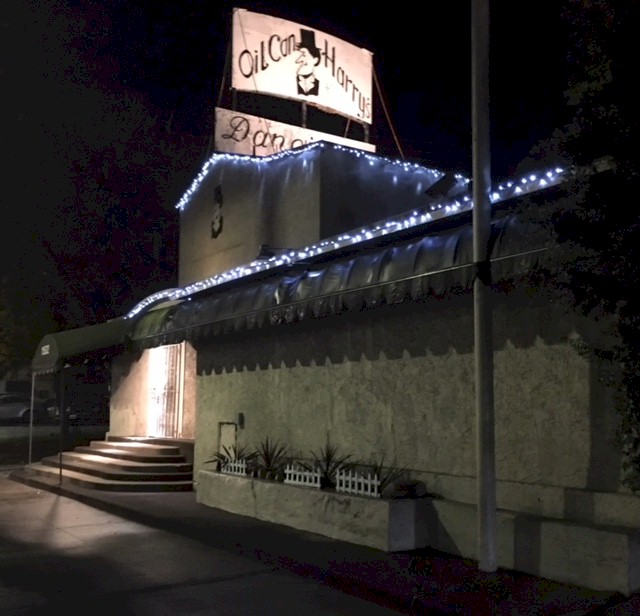 The 2019 Grammys Afterparty Put the Club Back on the Map

On February 10, 2019, a Grammy afterparty was hosted by Mark Ronson, the songwriter-producer who won an Oscar, a Golden Globe, and Grammy for writing “Shallow” (performed by Lady Gaga and Bradley Cooper) for A Star Is Born.

“Mark had come to Oil Can Harry’s with friends and really loved the vibe and the retro look,” Dominguez says. “He had a vision for a theme party in the atmosphere in Oil Can Harry’s. They turned it into the Broken Hearts Club.

“It was a blast. Gaga hung out with us in the DJ booth,” Dominguez says. “She wanted champagne, so we had a bottle of champagne with her.”

The party helped put Oil Can Harry’s back on the map.

“The party made the papers all around the world,” Young says. “All of a sudden, everybody was back at the club. It was jammed, jammed packed. The Saturdays went haywire.

“It wasn’t always full before the Grammys. But when we did the Grammy party, it became superstardom,” Young says. “There were lines up the street.”

A Lot of Celebs Visited Over the Years

Over the years, many celebrities stopped by the club to take country line dancing lessons or to hang out and dance the night away, including Gena Davis, Demi Moore, Reese Witherspoon, Joaquin Phoenix and Amy Adams when they worked together on The Master, Greg Louganis, and Vanessa Williams.

At the end of the first or second season of the series, RuPaul hosted a private cast party at the venue.

“He came in dressed in a cowboy outfit with a big cowboy hat,” Dominguez says. “RuPaul loved his country music.”

This article has been updated to more accurately reflect the early history of the address.