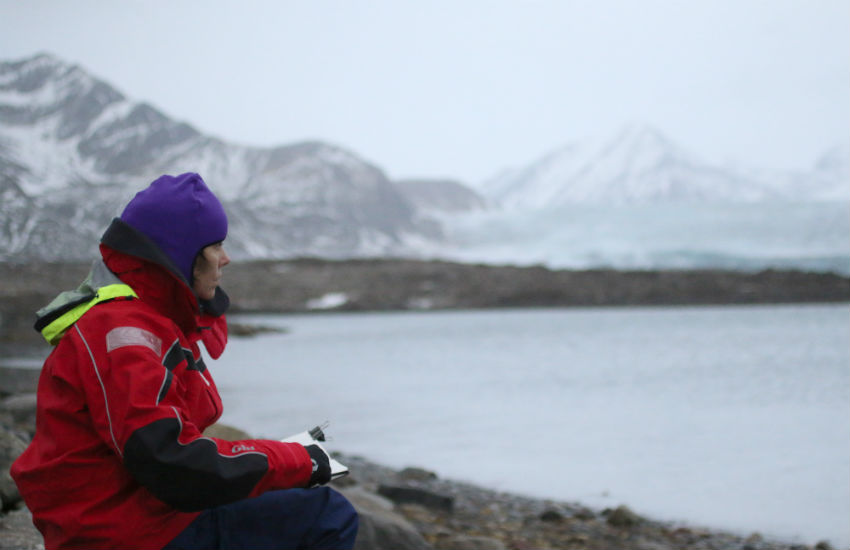 “You just can’t beat Mother Nature,” says Danielle Eubank. The Los Angeles-based painter took a two-week expedition last October to the North Pole to paint, draw, and sketch the changing land and seascapes. As part of The Arctic Circle residency program, Eubank sailed within 10 degrees of the North Pole. On board the three-masted barquentine The Antigua, the artist voyaged around Svalbard, an archipelago north of Norway, nearly reaching what’s known as the “permanent ice.” There, Eubank documented the top of the world: constantly changing ice forms, a Russian ghost town, and the bright greens of the aurora borealis.

Eubank is well known for her past trips on historical vessels, such as her circumnavigation of Africa on a replica 600 B.C.E. Phoenician sailing ship, and she has garnered a world-wide reputation for her abstract waterscapes.

We sat down with Eubank in her Tujunga studio to talk about her trip and look at her work as she begins to translate her sketches, oil studies, and photographs into paintings.

How does the Arctic expedition connect to your work overall?
My goal is to paint all the major bodies of water on the planet. I’ve painted about 150 bodies of water, and I have one more ocean to go. So that’s the big project. With that in mind, I was accepted into The Arctic Circle, which is a residency for artists and scientists and architects and educators. The expedition was about putting a bunch of people together on a boat, creative and scientific and architects and educators, and seeing what they come up with. And not just now, but over the next few years.

What was an average day like?
For me it was about being on the shore. Being on the boat was nice, but being on shore was really what it was all about for me. That and taking photographs was how I’d use the time. My sketches aren’t necessarily going to be worked up into paintings. They’re about that instant impression you have when you’re in a place, almost like tourist photos. I might not ever make a painting out of that image. It enables me to remember where I was and what I was feeling when I was in that space.

Was documenting climate change always your goal with the project?
It was a big concern of mine, and it had been since before departing, a long time before departing. I wondered, “How do I engage this side of it? I’m not a scientist, nor do I have any way of measuring it, per se.” So I asked the crew when we were looking at a glacier, and they said “Yeah, we’ve been going to these places for five years. These little islands that we’re looking at—we’ve never seen these before this year. Probably no human has ever seen these.” Because so much of the glacier was gone. It’s actually receding. And that’s anecdotal. But that will leave a lasting imprint on my mind for the rest of my life.

Does the drought in California affect your feelings about your work? Does it make you feel like your project is more urgent?
Definitely. As far back as I can remember, even when I was a little kid in Northern California, there was an urgency to conserve water. I think it’s a bigger part of the public consciousness now which is good. There is an urgency. I was shocked at how much plastic litter I saw in the Arctic, which had arrived there from other parts of the planet. I feel it’s my responsibility as a person to hammer home the imperative we all share to take better care of our planet. As an artist, I can only do my part in it, but I hope they’ll understand that the water is all connected. We’re all connected.