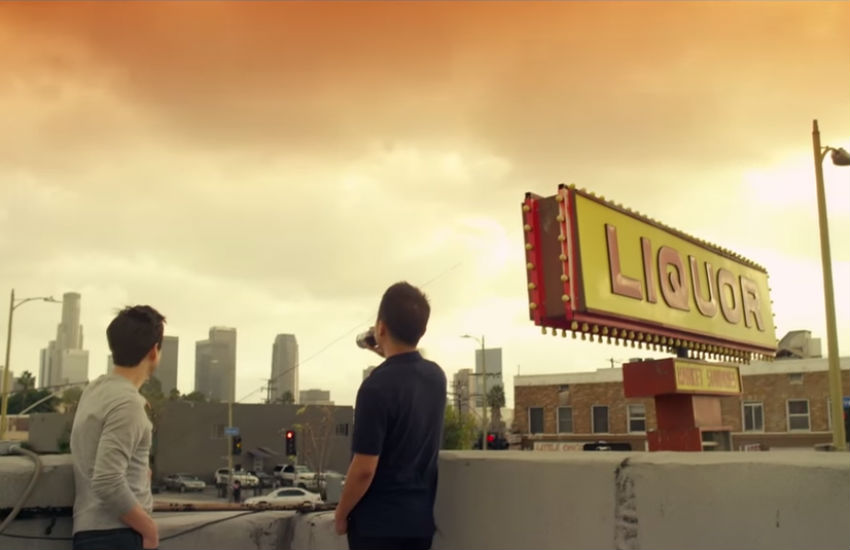 “It was just me and my friend Danny [Cho, co-writer and lead actor] and all these old memories of hanging out in Ktown,” says DPD, a native Angeleno. “We just wanted to retell those stories as if we were telling someone from out of town what it was like to grow up in this area. The film, which started out as a webseries, follows Danny, Peter (Peter Jae), Jason (Shane Yoon), Robby (Bobby Choy) and Sunny (Sunn Wee) for a few days –and nights –of Ktown debauchery, in this millennial coming-of-age story.

We met DPD at Cafe Mak, where hours were spent last year working on drafts of the script, to talk about how Ktown Cowboys went from small-budget web series to feature film premiering at SXSW.

Are you guys like the guys in the film?
Yes. And we’re not that imaginative. Most of us became close friends while shooting the web series, and when we wrote the first version of the feature script, the characters were all loosely based on the actors. Peter really did go to a fashion school and he was a bouncer; Sunny really has a liquor store and it’s the one in the movie; Danny is a standup comedian and he really does get booed off the stage all the time.

Watching this film made me feel like I was being let in on a secret. Is that something you wanted to have people feel?
On the surface there’s this universal story–a group of friends being a group of friends–but on the next level we’re tour guides. It’s a very niche movie. It’s about Korean-Americans in Koreatown, Los Angeles. That’s such a specific thing. Why would anyone watch this if they weren’t from this area? But we realized [from the reception of the web series] that people like to see a completely different world from their own. I think especially for people from L.A., it’s a cool thing to have.

What are you influenced by as a director?
We started out with Swingers (1996) as our main reference, but every time someone would ask me how I was going to justify “such a Korean-American story,” I started to think about Friday (1995). In that movie you felt like you were being introduced to a brand new part of L.A. They didn’t make any big attempt to say, “We’re different and you’re on the outside looking in.” They just assumed you would know, and you do start to figure things out as the movie goes on.

Ktown Cowboys is kind of like a love letter to L.A. Is that an accurate description?
It might not be the L.A. that everybody knows, but to me it is a love letter. I’m a hardcore L.A. guy. At the heart of it, what I love about L.A. is that so many people have this idea that we’re all laid back surfers, but I see the opposite. It’s a city of dreamers and you have to hustle so much harder because of that. You’ve got grips waking up at four in the morning, going to set for the next fourteen hours straight with only snacks to munch on, or the actor that works as an extra for two years before he or she even gets an audition. I love that hustle. I made a movie about Korean-Americans in Ktown. That wouldn’t happen anywhere else.