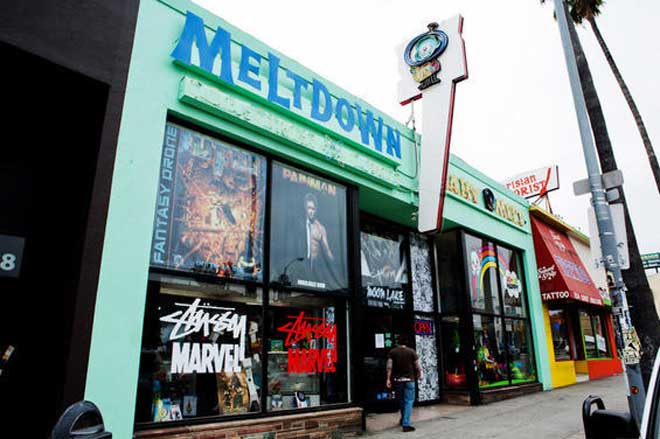 Doctor Who fans are a devoted bunch. They show up for trivia nights. They wear t-shirts alluding to a blue box. They’ve created entire conventions devoted to the show, a science fiction staple that premiered in the 1960s on BBC. Currently on his eleventh regeneration, the Doctor remains busy saving the universe each week. Is it possible for an absolute newcomer to feel welcome with this hardcore crew? Enter NerdMelt.

Located in the scruffy backroom of Meltdown Comics, the venue has become one of L.A.’s most important hubs for stand-up comedy and all manner of geekdom. Armed with only a cursory knowledge of the show (that blue box is important, it’s called TARDIS) and having one episode under my belt, I pushed past the thick black curtains for BBC presents Doctor Who at NerdMelt, and event that’s equal parts screening and competitive trivia game.

Held every month, it attracts a diverse audience of Whoovians who know every bit of dialogue. There’s a special magic that happens when fifty people laugh in unison in a small room on a hot day. Plus, there’s the opportunity to win books and DVDs. After surviving my foray into the space where nerd mania lives, I spoke with Kyle Anderson, Dr. Who fan extraordinaire and the host of the show.

Doctor Who’s next screening will be Saturday, August 31st at 2 p.m. at Meltdown Comics.

What would you say to someone who has never seen a single Doctor Who? Why should he/she start?

Doctor Who has been around for so long and has had such a variety of storytelling while staying true to its hallmark: an alien traveling through time and space doing good deeds and saving people. In a world where heroes generally have the biggest gun, it’s great to have a show that’s about using one’s brain and wit instead of your fists to solve problems. It’s also, even at it’s darkest, a lot more feel-good than most of the apocalyptic sci-fi and adventure shows out there.

Favorite episode ever and why?

“The Caves of Androzani” is a magnificent piece of storytelling from beginning to end. I love it because it’s not about a plot to destroy the universe or an alien invasion; it’s about petty political power struggles and drug deals. It’s the Doctor’s fault he and in his young female companion got mixed up with these people and he wants to do nothing more than to get her away. He’s willing to sacrifice himself for someone he hasn’t known for very long because it’s the right thing to do. That’s the Doctor all over.

Why has Doctor Who been so successful?

I think it’s stayed popular because it’s continually reinventing itself. Anytime a new production team or lead actor comes on board, it rejuvenates and freshens things. It’s also a character and a premise that people can really get behind and there are never any real parameters on what kind of stories can be told. You want to do a Roman farce? Go for it! You want lizard people from beneath the Earth? Do it! Wanna meet Shakespeare or Van Gogh? You can! When the only limit is imagination, a show can go on forever.

How long have you been running Doctor Who trivia at NerdMelt?

The screenings/trivia have been going on since about August of last year. BBC Worldwide Home Entertainment coordinates screenings in various cities (New York, Austin, San Francisco, etc.) on the same day. I was very happy they wanted to do one in L.A. Since I write about the show for Nerdist, I lobbied for the position of host and they were kind enough to let me. It’s incredibly fun. I love getting to host these events and write the trivia questions.