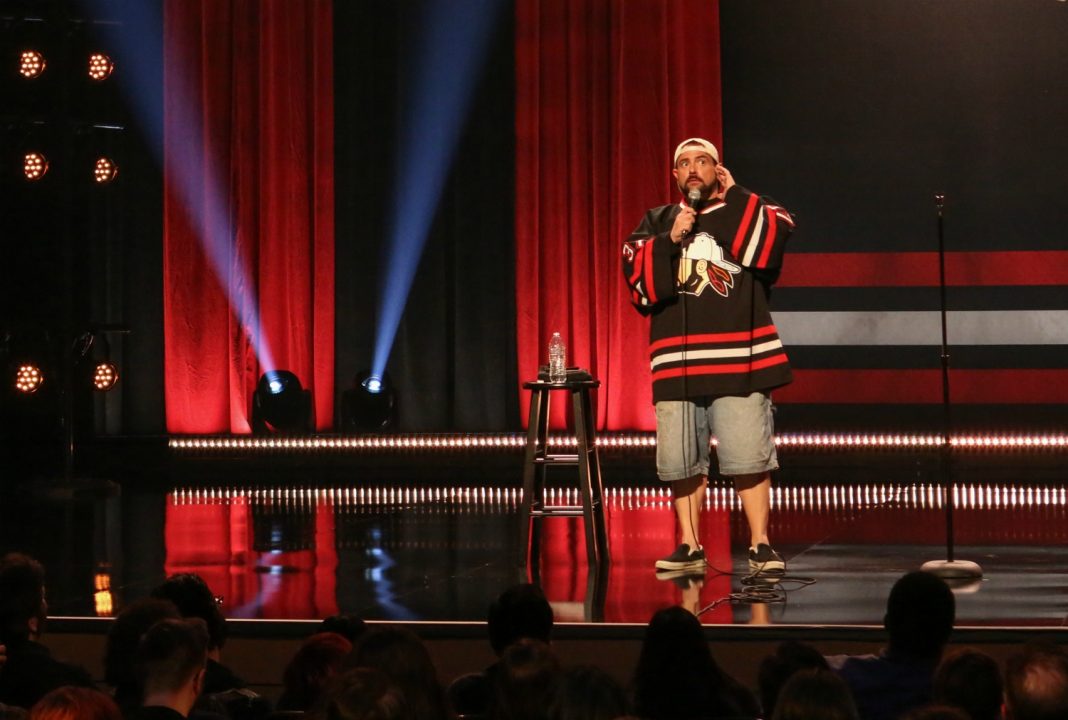 Stand-up comedy almost killed Kevin Smith. OK, technically the 100-percent blockage of a coronary artery resulting in a massive heart attack almost killed Kevin Smith, but you have to admit the timing was weird. In late February, the Clerks and Chasing Amy filmmaker was scheduled to perform back-to-back comedy sets at the Alex in Glendale, both of which were being filmed to be edited together and aired as an hour-long special. But after the first set, Smith started feeling weird—not, like, I-might-be-dying weird but weird enough (shortness of breath, vomiting bile) that friend Jordan Monsanto quietly canceled the second show and called the paramedics.

“I grew up with Redd Foxx. I thought I’d be clutching my chest and screaming ‘Elizabeth!’ but there was none of that,” Smith jokes of his somewhat anticlimactic brush with death. “I figured there would be a big spiritual component, but I felt like if started praying, like, ‘Jesus, save me,’ he’d be like, ‘You made Dogma—go fuck yourself.'” The heart attack was what doctors refer to as a “widowmaker,” the kind of crusher that only 20 percent of people survive. He decided to call the special—which ended up airing on Showtime—“Silent but Deadly.”

Smith talks about his life and various projects like a dude who kicked death in the nuts. Taking a cue from his daughter, actress Harley Quinn, Smith became vegan and dropped a bunch of weight, subsisting on Beyond Meat burgers and nachos from Santa Monica-based chain Veggie Grill. (He recently payed a fan $200 to deliver grub from a location outside of downtown Chicago all the way to O’Hare airport during an hour-and-a-half layover.) When he’s in L.A., he’s also big on Crossroads Kitchen and Cruzer Pizza.

Pics or it didn’t happen you say? Well here is photo proof that @Im_Alex_Smith delivered my @VeggieGrill order to me at @fly2ohare like a champ! I’m now on a flight to Vancouver with a belly fulla @BeyondMeat! Thank you, Man of Moody’s! (Not pictured but Also present: @Emilee3D.) pic.twitter.com/JfYx68wd5t

Fueled by various plant proteins, Smith is still the hardest working New Jerseyan in showbiz. The ’90s indie auteur and comic book nerd has recently directed episodes of The Flash and Supergirl (The Goldbergs too), and he’s currently writing a sequel to 2001’s Jay and Silent Bob Strike Back, reviving the popular stoner-dude characters that recur in Smith’s movies, played by Jason Mewes and Smith, respectively. And in between film and TV projects, Smith has spent the past decade turning podcast into a robust cottage industry. His podcast network Smodcast, named after the weekly show he hosts with director Scott Mosier, distributes more than a dozen shows. And live tapings Hollywood Babble-On, the entertainment-centric podcast he hosts with Kevin and Bean Ralph Garman, have become a Friday-night staple at the Hollywood Improv (when the duo isn’t touring to do live tapings in other cities).

For Smith, podcasting is a passion project that evolved into a business. “It’s a dream come true,” Smith says. “As much as I love film and [my films] put me on the map, podcasting is what I was made for. If podcasting existed when I saw Slackers, I wouldn’t have gone home and made a movie, I would have made a podcast. It’s been such a powerful medium and such a pleasurable medium.”

He compares himself to both a punk rock musician—traveling the live show and playing his own version of four-chord comedy—and a hooker: “It’s making money with your mouth.” Taping episodes of Babble-On in front of a live audience rather than in a studio has been part of the fun. “I know how hard it is to move tickets in this market to anything. There are so many choices, it’s hard to mobilize an audience, and that show has always allowed me to feel like for two hours on a Friday night, I’m happening in L.A. and everyone is here,” Smith says. “It’s great for the ego.” (Their next show is at the Improv on Oct. 26.)

Smith says that being vegan on the road can be a pain, but he can’t imagine going back to eating meat. Also a pain? Writing all the fat jokes out of the new Jay and Silent Bob script “Now most of them are vegan jokes, but there goes one of the arrows out of my quiver, man,” he says. “I’ll never regret being healthier and slimmer, but it could be thing that could destroy Jay and Silent Bob…We did a photo shoot with me and Jay in the outfits…I look like a teenage girl cosplaying as Silent Bob.”