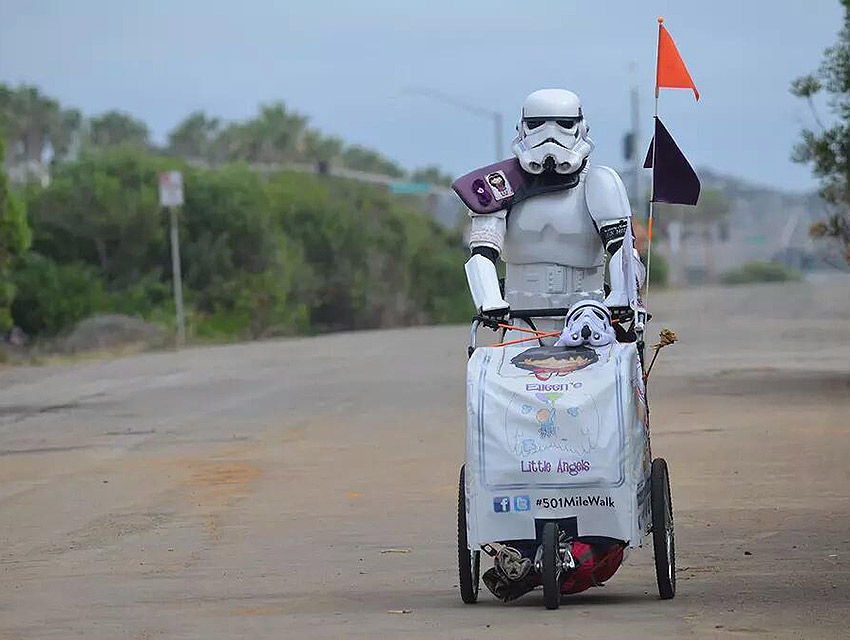 With the Star Wars sequel due in theaters this year, it’s likely Comic-Con 2015, kicking off today, will have its fair share of fans dressed as Stormtroopers. But no other fan has a story like Kevin Doyle. On June 6, Doyle began walking down the California coastline dressed as a Stormtrooper, an homage not to George Lucas’s films but to his own late wife. He arrived in San Diego for the confab today.

As members of the 501st Legion, otherwise known as the Star Wars costume guild, Minnesota native Doyle and his wife Eileen Shige Doyle often donned galactic getups together. In 2009, Doyle even wore a Darth Vader outfit to propose. When Eileen died of cancer in 2012, Doyle said he felt lost. “While our time together here on earth was so very short,” he wrote on an online fundraising campaign documenting his journey, “my devotion to her is life long [sic] and I can’t imagine my life without her.”

After his wife’s death, Doyle, 57, sought out ways to memorialize her. He completed a breast cancer walk in his home state while dressed as a Stormtrooper and planned a trip Rancho Obi-Wan, a Star Wars museum in Petaluma. Upon his arrival in California, he had the thought to attend Comic-Con. When he Google-mapped the route, he found it was exactly 501 miles—the same number representing the Star Wars costume guild. Doyle believed it was a sign and hatched a plan to walk from Rancho Obi-Wan to San Diego for this weekend’s event. Sticking to the coast, Doyle covered between 20 and 45 miles each day, for a total of 645 miles (had he taken a highway route, he would have trekked the original 501). He pushed a jogging stroller carrying camping supplies and more the entire way. As he walked, he often met intrigued strangers who would stroll besides him and share their own stories of cancer.

“Sometimes they just want to stop and give me a hug,” he told the San Diego Union Tribune. “I haven’t wrapped my head around it at this point. I’m walking to honor my wife but I had no idea that people would make it their own personal journey.”

While Doyle kept his own Twitter account to document the journey, the rest of social media collectively “awww”-ed over the heartwarming story. (Check out a few reactions below.) With the money raised thanks to his fundraising campaign, Doyle plans to launch a non-profit called Eileen’s Little Angels to create toys bearing his late wife’s comic book artwork and fight children’s cancer.

RT @501MileWalk: Got off my feet for a bit today in Marin County! The walk (and fun), continues! #501MileWalk pic.twitter.com/qsndhKzFqD