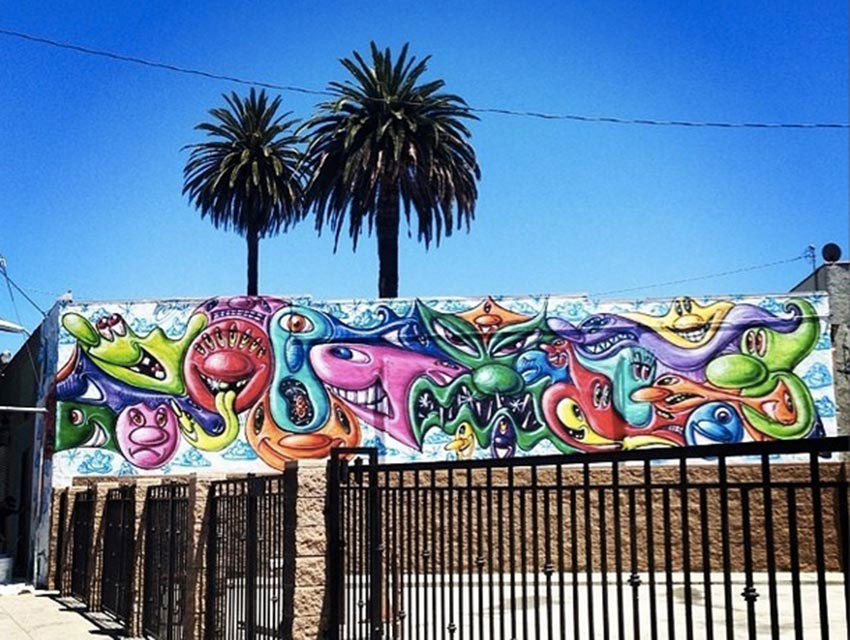 Kenny Scharf has the ability to turn gritty city streets into animated canvases with characters that seem to pop off of walls. He did it in West Hollywood, painting an entire side of the city’s public library—legally. Now he’s giving often forgotten Adams Boulevard some love.

WHO: Scharf got his start in New York in the 1980s and played a major role in its interdisciplinary art scene. He has stayed relevant because he’s a creative dynamo with a strong work ethic. It’s a lethal combination. He now splits his time between New York and Los Angeles. Thanks to Warren Brand, the genius behind Branded Arts, an organization that works to beautify the city with large public murals, Scharf is reaching more people with a new wall that went up earlier this summer. Glistening with goodness, the mural stretches onto the sidewalk with a splat.

WHAT: The work calls to mind the best—Basquiat, Haring, Warhol—but Scharf’s genius lies in his ability to create a distinct, otherworldly color palette. It’s as if you’re looking inside a tremendous bubble made of candy colored beings. The work is playful, but make no mistake: This isn’t child’s play.