“I need this rope tighter,” says Kenny Scharf, his Birkenstocked feet hanging over the edge of a mid-century building that hugs La Cienega Boulevard as it bends through Culver City. Dressed in a red T-shirt, seersucker shorts, and a straw hat, the 60-year-old looks more like an off-duty lifeguard than an L.A. art icon in the midst of creating a public sculpture.

Known for his colorful, highly recognizable anthropomorphic blobs, Scharf is using sun-faded kiddie cars and garlands made from single-use plastics (strung and spray-painted by Lino Meoli, son of artist Maripol) in an assemblage of junk that will drip from the façade of Honor Fraser Gallery. On Saturday, September 7, his latest solo show, Optimistically Melting!, opens at the gallery, but at the moment Scharf is busy lowering a veritable island of lost toys—battery-operated Escalades, Jeeps, airplanes—off the roof, all anchored by a spider web of Day-Glo ropes. One of the vehicles, a turquoise Studebaker, was a gift from his mother to his grandson. “This one’s sentimental,” Scharf says with a grin.

Like some doomsday bricolage, this refuse necklace is perhaps the most poignant of Scharf’s Lixos sculptures. Named after the Portuguese term for “trash,” he’s been making them since 1982, the year he bought a then-remote beach property in Bahia, Brazil.

“When you go to a nice resort they’re cleaning up all the plastic every day, but when you’re in the middle of nowhere it just accumulates, it’s just floating in the ocean, and it really hit me that this is a big problem,” says Scharf, who began bringing the trash home to the U.S. and then using it in his installations. “There used to be over 1,000 miles of rainforest, the whole coast used to be a skinny line of rainforest, but there is less than three percent left and it was right where I had my house. It’s the most ecologically diverse place in the world, but every day I’d watch these giant trucks filled with trees and these hillsides would be gone. I was witnessing it.”

Growing up in California amid the ecology movement of the ‘60s, Scharf was predisposed to understanding the ramifications of this type of destruction, and his art has been screaming about the planet’s impending environmental collapse for nearly four decades. But in the wake of this summer’s Amazon fires, Scharf’s message feels sharper and more poignant than ever.

“Of course I’m taking this extra hard,” says Scharf, joking. “And of course I install on the roof when it’s 95 degrees outside.”

If it weren’t after Labor Day, that figure might seem somewhat reasonable. Last year on this day the high was 77, and the average is 84, so when they take a break while more rope is procured, Scharf and his team relax in the air-conditioned climes of galleries below. 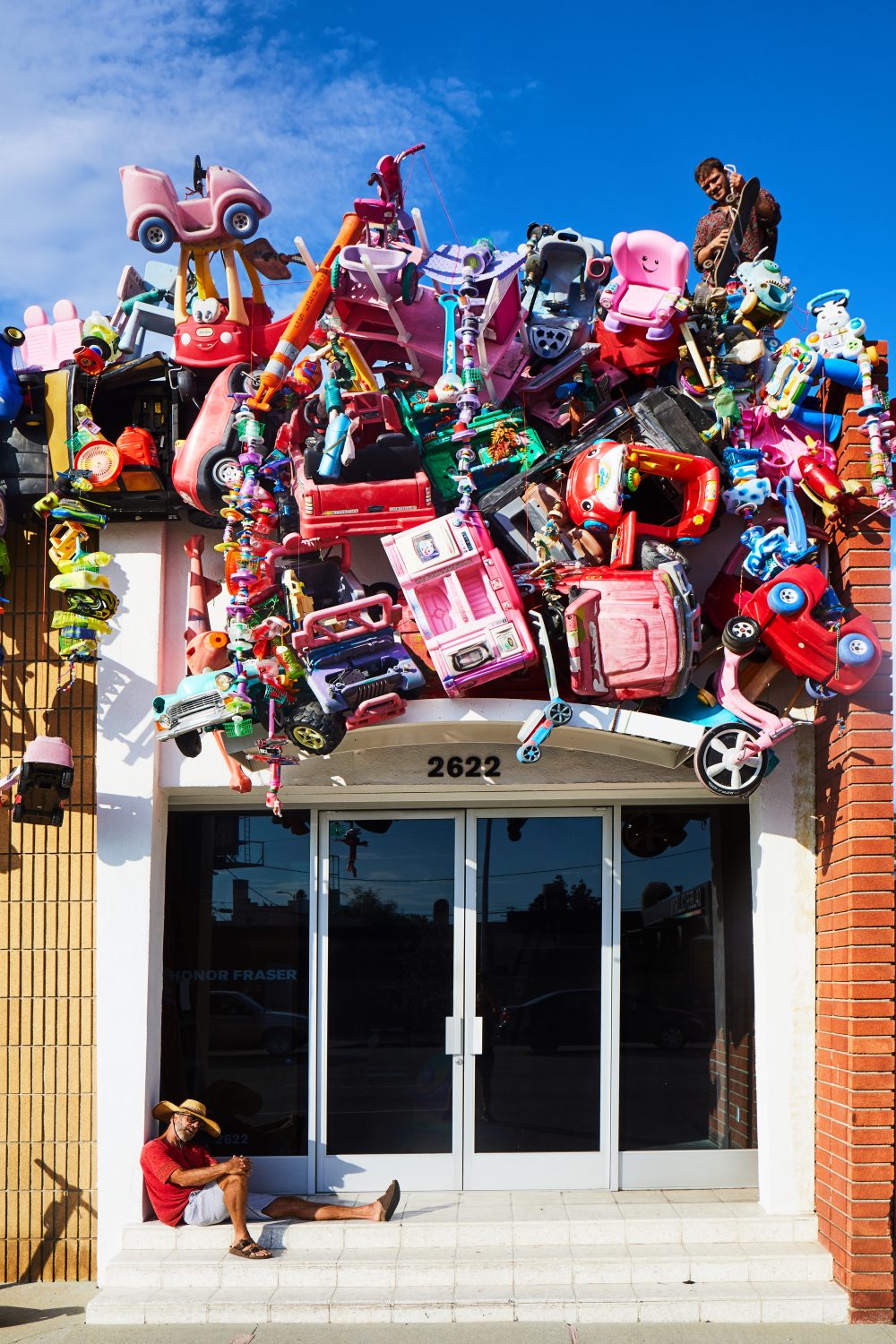 In addition to the Lixos lining the rooftop, Scharf is introducing two new bodies of work in the main gallery. In Fleurs et Vase Sur la Table, the artist tackles the still-life with cosmic flowers—some splattered, some bejeweled—that spring from vases and hover over backgrounds that mimic Scharf’s early screenprinting works and his newer Sloppy Style paintings. At first glance, everything seems cheery, almost cartoonish, until you realize some of the flowers are dying, and that the dire headlines in the background—taken from American and Korean newspapers—warn of “Emissions Surge Hastening Peril Across Globe” and “Greenhouse Gas Emissions Accelerate Like a ‘Speeding Freight Train’ in 2018.”

“I don’t really plan anything; things evolve,” says Scharf, who was commissioned by a collector to do one still-life two years ago. Another went to the Hammer Museum, so Scharf made a giant one that will be installed on the wall between three large ceramic planters that he produced over two days with Pasadena sculptor Stan Edmondson. Unlike the doom and gloom of the Lixos and still-lifes, these massive planters with somewhat menacing eyes and teeth sprout succulents from the tops of their heads. “They’re my plants from the studio. I didn’t want it to look like it came from the store. You would never buy a plant from the store that looked like that,” says Scharf, pointing to an outcropping of ponytail palms growing like Flock of Seagulls bangs over the brow of the square-nosed, cocoa-tinted planter. “But it’s kind of perfect because it goes right through the doorway.”

These glass-half-full works actually pump more oxygen into the environment and are meant to reduce stress for their eventual collector/caretaker. They also offer a few moments of hope beneath the bright rectangular skylights, serving as the show’s titular optimism.

“I’m just so freaked out because of the kids—they’re so innocent and pure and what the fuck is going to be there for them? Sorry, there’s no animals, they’re all extinct. It goes back to Bush, Sr. He had the chance, he had it on his desk. The scientists were telling him and he was listening, then [Bush chief of staff John Sununu] stopped him,” says Scharf. “We would have been fine.” While he still thinks we have time to avert a total environmental collapse, he’s not about to slow down his efforts despite coming off a few years worth of back-to-back museum surveys and solo shows stretching from MOMA to Seoul’s Lotte Museum.

“I’m enjoying everything personally, but at the same time it’s not that easy to feel celebratory,” says Scharf. “I’m so stressed out about everything so I’m working harder than ever, using anger and frustration to try and make a message. There’s not much more I can do.”

And with that, Scharf is back up on the roof in his sandals and sunglasses, hoisting a steady stream of plastic across the front of gallery until sundown.