Home Art The Hollywood of Kenneth Anger’s Imagination Is Coming to Life in the... 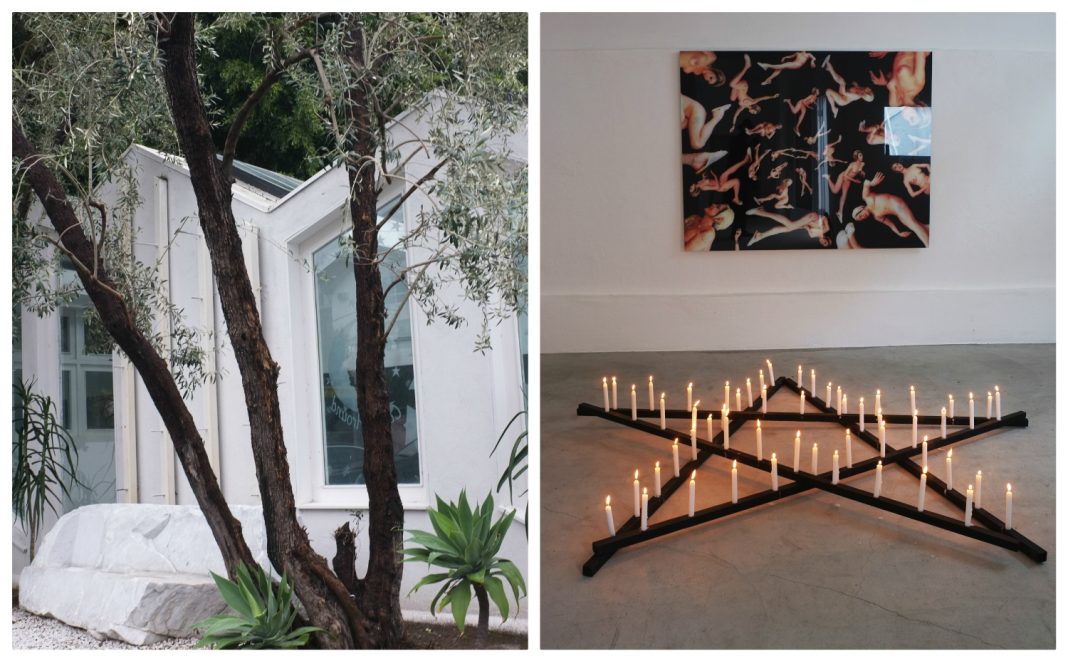 Like the empty shell of Tower Records that sits across the street, the original West Hollywood digs of Spago at 1114 Horn Avenue sat empty for nearly two decades. Then, two years ago, Italian artist Mattia Biagi and Darrin Wilson, his partner in the preservation-minded real estate development group Studio Dardo, revamped it and rechristened it as the BADD House.

“We’re giving new life to the former iconic Spago restaurant by bringing back the energy and culture of this historical Sunset Strip location,” says Biagi, who staged a show of his own work in the space a year ago.

After a conversation with Nicodim Gallery’s Ben Lee Ritchie Handler, who’d been scheming since September with Autre editor and founder Oliver Kupper how to re-energize the space during the annual art fair Frieze Los Angeles, Biagi turned the keys over to the chimerical curator. With some help from Nicodim and Jeffrey Deitch Gallery, Ritchie Handler and Co. have transformed BADD House into a veritable house of ill repute for Hollywood Babylon: A Re-Inauguration of the Pleasure Dome, a multimedia group exhibition, which will be open to the public for the duration of Frieze Week following tonight’s private opening party. The show employs the experimental films of artist and occultist Kenneth Anger, which will be projected onto the building’s newly whitewashed facade. They serve to layer a new (quasi-fictional) veneer of psycho-sexual mythology onto Wolfgang Puck’s famed celebrity haunt, which attracted everyone from Warren Beatty to David Hockney during its storied run at the location from 1982 to 2001.

“Wolfgang Puck made this restaurant that was supposed to be this democratic, utopian, socialist kind of space—one of the first organic farm-to-table restaurants—but the only way you could get in was if you were Sylvester Stallone or Jeffrey Deitch,” says Ritchie Handler, dressing the part in black-and-white striped bell-bottoms and fur-lined Gucci slippers as he walks me through a new cast bronze patio door imprinted with Biagi’s thumbprints. “But you could see it from the Sunset Strip, so you could only imagine what was going on, assuming it was something like [the Anger book] Hollywood Babylon, which came out in 1965 and established Hollywood as this sleazy place where everyone was fucking everyone, doing drugs, murdering each other. It permeated culture beyond its viewership. And Spago was that in a nutshell: this idea that you could come off the bus and become a movie star.”

Walking up the front porch, visitors will be met with a rainbow of lights projecting from one of Shahla K. Friberg’s stained-glass boulders. Past the front door the original bar is bookended by a glittery painting of Deitch and Amanda Lepore by Vietnamese artist Kieu, and a steel fountain sculpture Biagi screen-printed with images of Louise Brooks, Bela Lugosi, Greta Garbo, and Clara Bow. (Anger’s Hollywood Babylon, which was banned just ten days after it was published and was not republished for an entire decade, asserted that Bow slept with the entire USC football team, including a young John Wayne.) Just beyond the fountain, paintings of Montgomery Clift, Leonardo DiCaprio, Busta Rhymes, and Grace Jones—by Gus Van Sant, Christine Wang, Devin B. Johnson, and Georgina Gratrix, respectively—up the fame factor inside the window-wrapped dining room, which is overrun with surrealist plant installations from Lani Trock that look as if they were ripped from a libidinous Anger scene.

While Deitch first went to Spago with Jean-Michel Basquiat and Larry Gagosian in the early ’80s, it was not a place you’d find Anger. “When I wanted to get to know Kenneth Anger someone told me, ‘Oh, you’ll find him every Thursday at Musso & Frank’s where he goes for the chicken pot pie,’” Deitch says.

In Ritchie Handler’s reimagining of Spago as an orgiastic, diamond-eaters bacchanal—a reference to Anger’s 1954 short film Inauguration of the Pleasure Dome—the restaurant’s upstairs offices function as a  “Sex Room” and a “Casting Couch,” which visitors are directed to by a Mike Kelley “Auditions” sign. The former is filled with Bob Mizer’s photos of gay men wrestling, a Katherina Olschbaur painting of two beast-like figures fucking, a Richard Bernstein print of the Beatles milling around in the nude, and a series of spells (for spiritual alignment and sexual power) by the artist-witch known as L. The “Casting Couch” room features a massive Matthew Rolston photo of a mummified human from the Capuchin Catacombs of Palermo lit and shot like one of his old Rolling Stone covers. It overlooks a cast bronze Isabelle Albuquerque sculpture of a headless silver-plated female form with a silver saxophone emerging from her vagina. In the corner, a Scott Laufer painting of Billy Graham observes the whole macabre mise en scene.

The vibe gets more intense in the “Sex Dungeon” (formerly the kitchen), which plays host to a cascading mirrored glass sculpture by Friberg, another Christine Wang meme painting (this one urging a pair of dizzied Pamela Andersons to “DON’T HODL TOO LONG”), and Tyler Matthew Oyer’s pentagram sculpture hewn from wood, wax, and virgin blood, and topped with lit candles. Hanging over this fiery black star is a self-portrait by Genesis P-Orridge documenting when the artist and their partner, Lady Jaye, became a third entity (or pandrogyne). P-Orridge also installed a neon “Psychic Cross” that will flash against traffic above the Coffee Bean parking lot facing Sunset. Meanwhile, Brian Butler will invoke all the Hollywood Babylon themes Monday night in a “sex-magic” performance on the roof with a Tesla coil for anyone cruising the Strip to behold. Afterwards, a two-headed dancer will snake through the party—and in front of those famous dining room windows for the paparazzi—with a dress designed by Valerj Pobega.

“For a long time Spago was the place so it was always a very special combination of music people, movie people, art people, finance people, which goes on to this day. But this overlap with the L.A. underground and Kenneth Anger is more of a fantasy,” says Deitch with a laugh. He should know: he helped manifest the 2011 Kenneth Anger: Icons exhibition at MOCA when he was the museum’s director. Still, Ritchie Handler wants folks to fully indulge in the Angerian fantasy, if only for the week.

Walking down Sunset with his bouffant flopping in the wind, the curator looks back into the old dining room windows as cars pass by and muses, “Hopefully people will have gotten laid by more than one person and feel the omnipresence of Satan in their every action for at least two days afterwards. I want people to feel like they have the taint of Hollywood on them.”