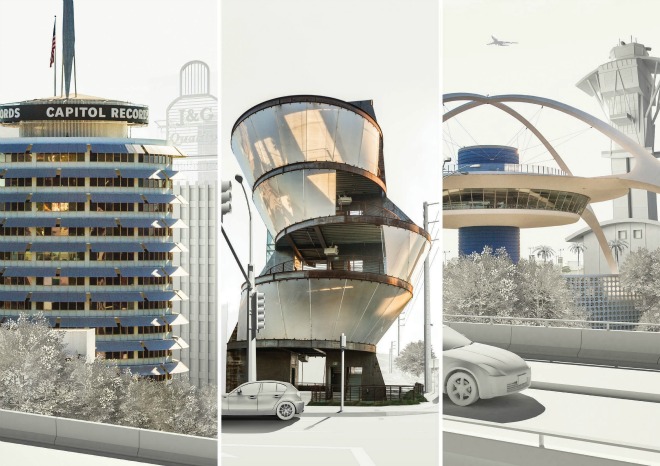 Pacific Standard Time Presents: Modern Architecture in L.A., a scaled down sequel to the original Pacific Standard Time, is officially underway. This time around, there are 12 exhibitions and nearly 100 related events scattered across the city, from construction sites to the Schindler House, from Pasadena to Santa Barbara. Who can keep it all straight? Here’s a quickie guide.

A Confederacy of Heretics: The Architecture Gallery, Venice, 1979
March 29 – July 7
SCI-Arc Gallery
In 1979, Thom Mayne’s pop-up exhibition in Venice, the Architecture Gallery, was the place to see photos and plans of visionary structures. Revisit the ten-week show that highlighted the early works of then-young architects Eric Owen Moss, Frank Gehry, and Frank Dimster.

Stephen Prina: As He Remembered It
April 7 – August 4
LACMA
The artist recreates two wartime Schindler homes, since demolished, by rebuilding the furniture that once warmed their interiors. Disembodied, Prina says, each piece resembles an “amputated limb.”

Curating the City: Modern Architecture in L.A. 1940-1990
April 20 – July 27
Los Angeles Conservancy
The Conservancy reboots their Curating the City program with a new series of twilight walking tours and panel discussions on suburban sprawl. See how your nostalgia-suffused snapshots of Bunker Hill skyscrapers stack up in their Instagram contest.

The Machine Project Field Guide to L.A. Architecture
May 1 – August 15
Locations TBD
The Echo Park artists’ group recruited thirty of its own to respond to architectural landmarks around the city. Stay tuned for details, but projects are rumored to include site-specific performance art set inside a Schindler home and a lecture on aquatic arcana delivered (where else?) at a three million-dollar Frank Gehry aquarium.

Everything Loose Will Land
May 9 – August 4
MAK Center for Art and Architecture at the Schindler House
This installment makes light of Frank Lloyd Wright’s infamous dig, “Tip the world over on its side and everything loose will land in Los Angeles.” Like most 1970s boundaries, those between L.A.’s artists and architects blurred, leading to unprecedented collaborations and innovations. Function and form cease to be distinct in this exhibit that unites PST’s emphases on architecture and visual design.

On-Site Office Trailers: Invisible Architecture of the Urban Environment
May 17 – June 16
The Center for Land Use Interpretation
Boxy, temporary, ugly…and artsy? The maligned prefab construction trailer gets its due as a stepping stone to permanence in this photographic exhibit.

Windshield Perspective
May 17 – July 9
A+D Architecture and Design Museum
Most of us tune out behind the wheel, but this installation invites visitors to interpret their daily commute with a critical eye. The exhibit recreates a bleak stretch of Beverly Boulevard between Normandie and Virgil, questioning the car windshield’s role as both shield and lens.

Extreme IDEAS: Architecture at the Intersection
May 22, May 29, June 5, June 28
UCLA Architecture and Urban Design
Inspiration comes from many quarters in this series examining how Hollywood, Detroit, and Silicon Valley are shaping the radical future of architecture.

A. Quincy Jones Building for Better Living
May 25 – September 8
Hammer Museum
The Hammer exhibit features work by the longtime L.A. architect, reveling in his designs—commercial, residential, and institutional.

A New Sculpturalism: Contemporary Architecture from Southern California
June 2 – September 2
The Geffen Contemporary at MOCA
Local architecture gets its day in the sun (literally and metaphorically) when contemporary structures by L.A. luminaries Eric Owen Moss, Frank Gehry, and Michael Rotondi are recognized as works of art.

CicLAvia – Iconic Wilshire Boulevard
June 23
Wilshire Boulevard from Downtown to Fairfax Avenue
Pedal in peace (with several hundred of your neighbors) as you all gaze, car-free, at the landmarks along one of the city’s most historic boulevards.