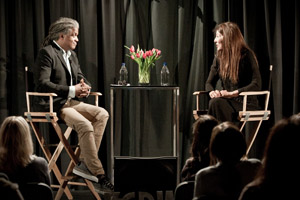 Catherine Keener was nervous for last Tuesday night’s conversation with film critic Elvis Mitchell at the inauguration of UpClose, an interview series hosted by NPR and KCRW. The academy-award nominated actress, earthy in a loose black frock, kept trying to get away with one-word answers. Hoping to provoke some dialogue, Mitchell mentioned to Keener that directors seemed to like her. “Thanks,” she said, laughing hoarsely at her unhelpful reply.

Mitchell kept nudging to no avail, so Keener tried to explain. “For me, it’s the shorter words…less talking,” she said. “Okay, show’s over, everybody,” Mitchell joked to diffuse the tension, but when Keener finally opened up, she acknowledged that she sees merit in understatement, in “knowing when to leave a room.” She calls it saichel, which is Yiddish for common sense and a demeanor she picked up, ironically, as the middle child of a large Catholic family in Hiealeah, Florida, where cowboys rode horses and Keener became so independent and scrappy that she got kicked out of high school in 11th grade. Keener talked about falling in love with Westerns and helping out at her dad’s car shop. ”You’d pay your dues counting nuts and bolts and then you’d go to a movie,” she said.

Keener first acted in the theatre ensemble at Wheaton College, but after graduation she pursued casting as an assistant for agent Gail Eisenstadt. Shortly after Keener followed her to L.A., Eisenstadt’s health crumbled from lung cancer. “Towards the end of her life, she asked me what I was doing with mine,” Keener recalled. That’s when she revealed a secret ambition to be an actor. “I don’t think it’s a pipe dream,” her mentor told her.

Keener has an honesty about her that comes across on camera. Only an actress capable of conveying emotional complexity could pull off unsympathetic characters like Amelia in Walking and Talking and Kate in Please Give. Offscreen, she’s one of those people who remains endearing in moments of weakness, and she knows it; When Steven Soderbergh yelled ‘Action!” on the first day of filming Out of Sight, Keener blurted out, “I’m so nervous!” She admitted to the audience at last Tuesday’s event that her face went bright red in anticipation of the interview. It probably helps that Keener’s voice cracks often while she’s talking—you can’t fake that kind of vulnerability.

Still, the actress operates with a certain confidence. When Mitchell asked if she felt daunted by the responsibility of playing author Harper Lee in Capote, Keener shook her head no. “Maybe it’s my problem with authority,” she said, “like who’s telling me this is daunting? It’s not like I’m trying to be [the people I play]. Like who could be Harper Lee, I mean, Jesus.” It’s that same who-the-hell-are-you? Gut check that originally attracted Keener to a priesthood and that later infuriated the actress when George Clooney wouldn’t take her call to touch base for their collaboration in Out of Sight. “I was like, this fucking guy…” she remembers, laughing.

Keener likes to work with people she can trust. Please Give marked her fourth collaboration with Nicole Holofcener, and she’s done three times with Spike Jonze. She’s a huge director fan, and when asked if she’s ready to transition herself, she responded: “I think I’m ready to stop feeling like a dilettante if I did.” It was classic Keener: concise, sincere, and steeped in just enough insecurity to make her loveable.