Home Uncategorized Katie Couric: The Will McAvoy of Daytime TV? 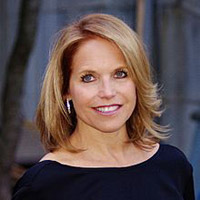 Her sights set on elevating mid-day discourse with a new, stunt-free talk show on ABC7, CBS Evening News vet Katie Couric is striking a Sorkinsian pose—and she’s doing it in heels. We talked with the host of Katie (debuting on September 10), about daytime programming, on-air paternity tests, and the “R word”: ratings

Ellen, Maury, Bethany, Kathy—you’re joining the ranks of the mono-monikered TV show hosts! How does it feel to have a show that’s just called Katie?
It’s funny, my name has been an interesting phenomenon throughout my career. When I first started I was Katherine Couric because I felt like I looked very young and thought Katherine added a little credibility. Then, when I got the job on the Today show, I realized that nobody calls me Katherine except my father when he’s mad at me, so I went back to Katie. I think for 15 years on the Today show people knew me as Katie. On the evening news I had to assume a much more serious demeanor because I was covering very serious news, so I became Katie Couric. Now, I’m back to who I am, which is Katie, without my last name.

Sally Jessy Raphael had her big red glasses, Geraldo has his mustache, and Jerry Springer has big bodyguards. Have you considered having a signature thing?
I know about Sally Jessy Raphael’s glasses, but I haven’t given that much thought to Geraldo’s facial hair, and I didn’t even know Jerry Springer had bodyguards! Maybe one will evolve. I’m not above having fun, that’s for sure, but I’m not that into contrived shtick. My only signature is probably what it’s always been but was kind of kept at bay when I was at CBS: People are interested in my shoes.

Are you stocking up for a shoe parade?
Not really. I want to look stylish but not distracting, and I don’t want to look like I’m trying too hard. But when I was on the Today show a lot of people were interested in my shoes—some a little too interested. Look up “foot fetish” online.

This week Ellen has David Arquette on talking about his emotional year and Dr. Phil is airing an episode called “My Husband, My Kids, and My Multiple Personalities.” Where on that spectrum will Katie live?
I’m not sure I would live in that Dr. Phil space, but there are subjects that Dr. Phil tackles that we would talk about, when it comes to relationships. I think I’ll take a more macrocosmic approach. Rather than having a couple getting divorced and having a Dr. Phil figure out what’s wrong in their marriage, I might talk a little more broadly about the phenomenon of divorce after 50, for example… what this means for a whole new group of baby boomers and what it’s like dating after 50.

It sounds like you’re trying to elevate the genre. You’ve held your own against American presidents, foreign dignities, and Sarah Palin—but an audience that is used to seeing paternity tests results returned in the span of a half hour show? That’s a different beast. How do you come at it?
I have to be true to myself, what I’m interested in, what I care about, the things I think are important, and the people [who] I think have something to say. I’m hoping the audience will respond. Anecdotally, a lot of my friends would like to see an elevated conversation on daytime television. It is going to be, hopefully, a smart conversation. Hopefully people will gravitate to that.

That’s a lot of faith in a viewership that has kept Jerry Springer on the air for decades.
Well, you know, I want to respect the audience. I think there are a lot of people who are hungry for information, who want someone to aggregate and help synthesize the barrage of information we get on a daily basis and make that a fulfilling experience.

Is the programming for day one set? Can you share it?
Yes—and no.

You have a book titled The Best Advice I Ever Got. What advice have you received for Katie?
The best advice I’ve gotten throughout the course of my career is to be true to who I am. At this point in my life, I’m pretty comfortable with who I am. I’m always striving to do better and to learn more and to do the best job I possibly can, but I just want to be myself. I’ve also realized you can’t please everybody, especially in this sometimes snarky media culture. There’s going to be detractors and people that just don’t like you. Where I used to be totally devastated if someone wrote something critical of me or said something unkind, now I just think: Everybody’s got an opinion and that’s OK. You’re not going to be everybody’s cup of tea.

But then there are ratings, viewership, and the network. At the end of the day, which opinions do you care about?
Well, I think my own, how I feel about what I’m doing. I don’t ever want to be in a situation where I feel like I have to change what I do just for the sake of ratings. The quality of my work has always been the most important thing to me. And if I had to make compromises for ratings, I wouldn’t do that. I really value the opinion of my executive producer, Jeff Zucker, because he’s really talented. I value the opinions of the people with whom I work. I value the opinions of my daughters. My dad used to be a great guiding light for me. He passed away, but I really valued his opinion, and I have a lot of really smart friends who I listen to. At the end of the day, you have to trust your own gut and your own judgment. If the ick factor is in me, I know that inherently. I think I’ve done pretty well over the years listening to my heart.