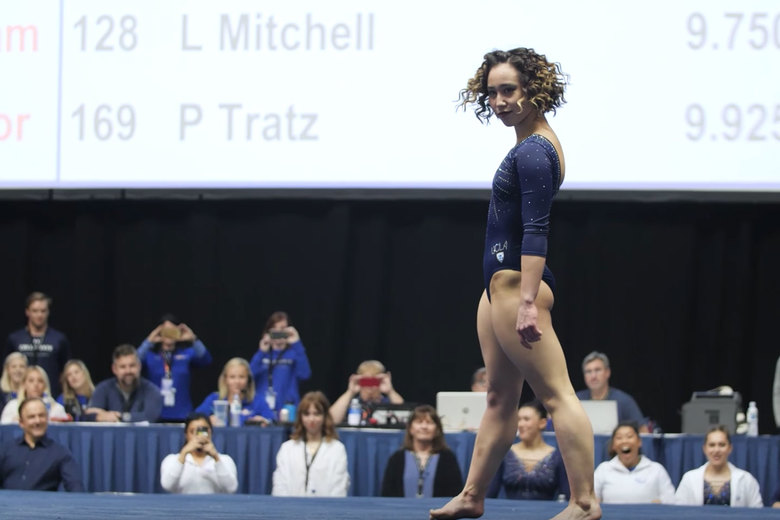 With a smile and a shimmy of her hips, UCLA gymnast Katelyn Ohashi kicked off an electric performance at the 2019 Collegiate Challenge at Anaheim Convention Center Arena on Saturday. To a medley of up-tempo vintage hits, from Ike and Tina’s “Proud Mary” to Michael Jackson’s “The Way You Make Me Feel,” Ohashi tumbled and flipped her way to a coveted perfect score.

Since January 12, when the UCLA Gymnastics account tweeted a two-minute video of Ohashi’s flawless routine, the footage has accumulated more than 26 million views. But besides going viral, Ohashi’s routine helped UCLA beat Cal, UC Davis, and Michigan State at the meet.

Saturday marked the fourth time in the 21-year-old’s career she’s received a perfect 10. And it’s not the first time she’s had a little fun to Jackson either–in March she moonwalked to the King of Pop at the PAC-12 Championship and accumulated millions of views for that performance (you can watch it here).

“I think what I show is joy when I do stuff, so I think always having a love for what you do every single day is something that I hold extremely close to my heart because I know what it’s like to not feel that,” Ohashi told NBC Nightly News.

She joined the UCLA gymnastics team in 2015 after being a four-time member of USA Gymnastics’ Junior National Team. For a time before then, she’d been competing with a fractured back and two torn shoulders resulting from persistent injuries. In a 2018 video titled “I Was Broken,” Ohashi recalls that “no one ever fully knew what I was going through and I never really could say or publicize what was wrong with me.” She adds, “It took me finding Miss Val and UCLA and having a different goal and path to follow, to finally find joy and love within the sport again. I haven’t been able to feel this type of happiness in a long time.”

“Miss Val,” aka Valorie Kondos Field, was the subject of a 2017 Los Angeles article in which the ballet dancer-turned-gymnastics coach describes Ohashi as a natural leader. And Ohashi praises the coaching she received from Miss Val: “She pushes you to express yourself in many different ways, which fits with our diverse culture, where other teams would tell you to tone down.”

Ohashi sure as hell didn’t tone it down over the weekend. Here’s what Twitter had to say about her performance:

When I get back to Los Angeles, I will have to go support @uclagymnastics. This routine by @katelyn_ohashi earns a 10, and breaks genre. All around brilliance. pic.twitter.com/nuVY7S6adr

This triumph made even more poignant by Ohashi’s path to happiness: “I was broken. I was told I was too big; like a bird that couldn’t fly. This sport can be brutal, but I don’t think it has to be:” https://t.co/NNaCDGSCnY https://t.co/4h2wmmCNWK

Note to self: Go to a UCLA gymnastics meet
pic.twitter.com/nrwXtjmBVN