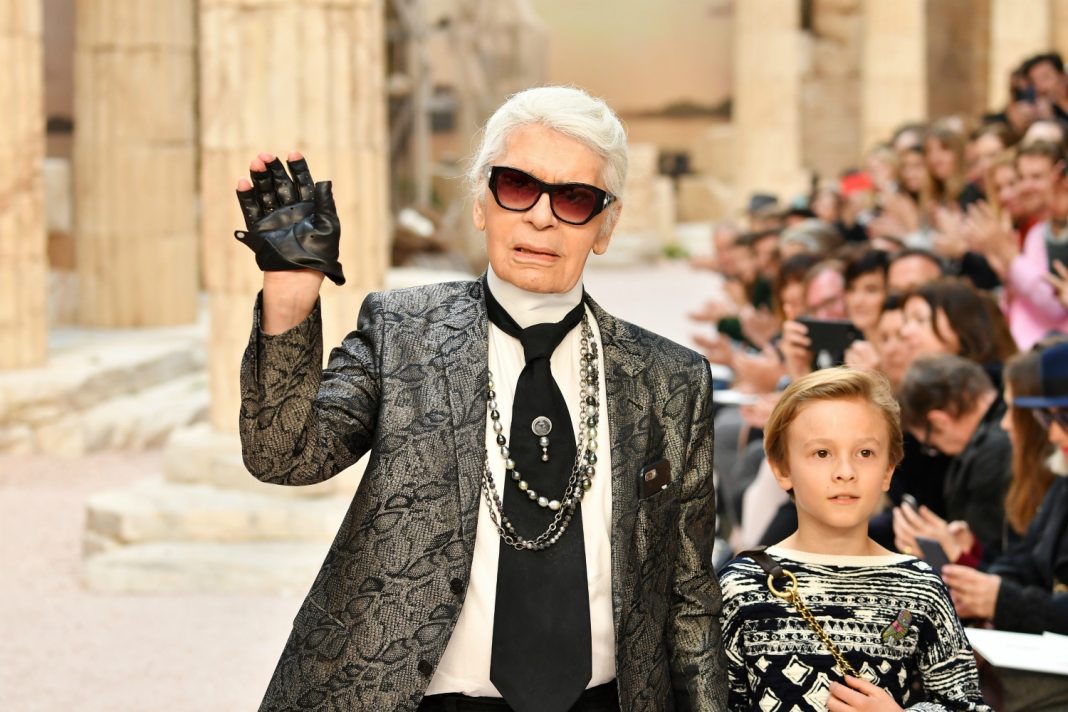 What will survive iconic fashion designer Karl Lagerfeld, who died today at the age of 85 (…or 87 …or 83) won’t just be the majestic collections he created during his 36 years at Chanel. Nor his long tenures at Chloe, Fendi, and his own eponymous label. Nor his photography, self-composed Chanel ads, his iconic look: powdered ponytail, high collared starched shirts, tight black Dior jeans and jackets, Chrome Hearts jewelry, and thick Jagger-esque lips.

Lagerfeld was the pithiest fashion designer since Madame Chanel herself. He always spoke in a rapid-fire staccato, breathless with aphorisms and enthusiasm for his own very fast brain—and tongue. Coco Chanel would have been very proud of how the Kaiser reimagined her legacy—and how he actually improved upon her incredible quotability. He never retired, never stopped working, and he certainly never stopped talking. As he once said, along with a great many other things: “When I was younger I wanted to be a caricaturist. In the end, I’ve become a caricature.”

“No memoirs. I have nothing to say, and what I could say, I cannot say.”

“Why should I stop working? If I do, I’ll die and it’ll be all finished.”

“I have nothing to say. I’m actually trying to make sure that I won’t be remembered.”

“I’m very much down to earth—just not this earth.”

“I like today and perhaps a little future still, but the past is really something I’m not interested in.”

“Youthfulness is about how you live not when you were born.”

“I do my job like I breathe—so if I can’t breath I’m in trouble.”

“I have no human feelings.”

“There are not too many people with an opinion I care for.”

“Vanity is the healthiest thing in life.”

“Change is the healthiest way to survive”

“When I took over Chanel, everybody said to me, ‘Don’t touch it. It’s dead. There’s nothing you can do.’ And I said to myself, ‘I love that people think that. Now let’s see.’”

“I would like to be a one-man multinational fashion phenomenon.”

“Think pink but don’t wear it.”

“I design like I breathe. You don’t ask to breathe. It just happens.”

“Stuff your brain with knowledge.”

“When people want to be liked for what they did, they should stop.”

“I don’t like standard beauty—there is no beauty without strangeness.”

“Fashion is ephemeral, dangerous, and unfair.”

“I have a sort of Alzheimer’s for my own work, which I think is a very good thing. Today too many people remember what they did—just forget it all and start again.”

“I’m open to everything. When you start to criticize the times you live in, your time is over.”

“Fashion is about going ahead, not about memory.”

“To be sloppy after 25 is a problem. You have to be really fresh to wear stuff that doesn’t look fresh.”

“You cannot dance at three parties on the same evening. I always said to my investors to put it on another level and make it affordable. I think that’s a modern attitude.”

“I’m never happy and pleased with what I’m doing,”

“I always think I’m lazy, maybe I could do better, I could make more effort and I always have the feeling that there is a glass wall that I cannot get through. But maybe when I get through, then it’s over.”

“As a child I wanted to be a grown-up. I wanted to know everything—not that I like to talk about it. I hate intellectual conversation with intellectuals because I only care about my opinion.”

“Dieting is the only game where you win when you lose!”

“I am a fashion person, and fashion is not only about clothes—it’s about all kinds of change”

“I want everyone to wear what they want and mix it in their own way. That, to me, is what is modern.”

“One is never over-dressed or underdressed with a Little Black Dress.”

“The woman is the most perfect doll that I have dressed with delight and admiration.”

“I am like a caricature of myself, and I like that. It is like a mask. And for me the Carnival of Venice lasts all year long.”

“What I do Coco would have hated. The label has an image and it’s up to me to update it. I do what she never did. I had to find my mark. I had to go from what Chanel was to what it should be, could be, what it had been to something else.”

“A respectable appearance is sufficient to make people more interested in your soul.”

“The secret to modeling is not being perfect. What one needs is a face that people can identify in a second. You have to be given what’s needed by nature, and what’s needed is to bring something new.”

“Luxury is the ease of a T-shirt in a very expensive dress.”

“Forgiveness is too easy. I can forget by indifference, but not forgive. I prefer revenge.”

“We need houses as we need clothes, architecture stimulates fashion. It’s like hunger and thirst—you need them both.”

“Fashion does not have to prove that it is serious. It is the proof that intelligent frivolity can be something creative and positive”

“Books are a hard-bound drug with no danger of an overdose. I am the happy victim of books.”

“Like poetry, fashion does not state anything. It merely suggests”

“I never touch sugar, cheese, bread… I only like what I’m allowed to like. I’m beyond temptation.”

“Reinvent new combinations of what you already own. Improvise. Become more creative. Not because you have to, but because you want to. Evolution is the secret for the next step.”

“Buy what you don’t have yet, or what you really want, which can be mixed with what you already own. Buy only because something excites you, not just for the simple act of shopping.”

“Guilty feelings about clothes are totally unnecessary. A lot of people earn their living by making clothes, so you should never feel bad.”

“Fashion and music are the same, because music express its period too.”

“The elegance is as physical, as moral quality that has nothing common with the clothing. You can see a countrywoman more elegant than one so called elegant woman.”

“Logos and branding are so important. In a big part of the world, people cannot read French or English—but are great in remembering signs”

“The French say you get hungry when you’re eating, and I get inspired when I’m working. It’s my engine”

“If you stick to something doggedly, you are off to a bad start.”

“What is the worst is a fashion designer who talks all the time of his or her creativity, what they are, how they evolved. Just do it and shut up.”

“Success nullifies. You then have to do it again, preferably differently”

“For me, Chanel is like music. There are certain notes and you have to make another tune with them.”

“If you throw money out of the window throw it out with joy. Don’t say: ‘one shouldn’t do that’—that is bourgeois.”

“Respect is not creative…Chanel is an institution, and you have to treat an institution like a whore—and then you get something out of her.”

“I’m very severe with myself and sometimes I miss French cheese, but in your world it’s not exactly the same thing.”

“We created a product nobody needs, but people want. If you need an ugly old car, it can wait, but if you want a new fashion item, it cannot wait.”

“Life is not a beauty contest, some [ugly people] are great. What I hate is nasty, ugly people. The worst is ugly short men. Women can be short, but for men it is impossible. It is something that they will not forgive in life—they are mean and they want to kill you.”

“Don’t sacrifice yourself too much, because if you sacrifice too much there’s nothing else you can give and nobody will care for you.”

“Those social networks, there’s something sad about them…It’s like a talkative mirror where people talk to themselves. And what I hate most in life is selfies.”

“Sweatpants are a sign of defeat.” You lost control of your life so you bought some sweatpants.”

“People who do a job that claims to be creative have to be alone to recharge their batteries. You can’t live 24 hours a day in the spotlight and remain creative. For people like me, solitude is a victory.”

“I am a kind of fashion nymphomaniac who never gets an orgasm.”

“What i like about photographs is that they capture a moment that’s gone forever, impossible to reproduce.”

“The only love that I really believe in is a mother’s love for her children.”

“People who say that yesterday was better than today are ultimately devaluing their own existence.”

“There’s a price you have to pay for fame, and people who don’t want to pay that price can get in trouble. I accepted the idea of celebrity because of a French expression: ‘You cannot have the butter and the money for the butter.'”

“When I was four, I asked my mother for a valet for my birthday. I wanted my clothes prepared so I could wear anything I wanted at any time of the day. I was a clothes freak. And I was mad for dressing differently at least four times a day.”

“I love classic beauty. It’s an idea of beauty with no standard.”

“Whatever it is, good or bad, it influences fashion. You can see that in fashion quicker than in any other thing going on. Fashion is something that reflects our lives and times with the shortest release because, cars, design and architecture take years to realise.”

“I’m rather pro-prostitution. I admire people who do it. It can’t be much fun. Thank goodness for it. People need relief or they become murderers.”

“Normally, I don’t recommend me for wedding dresses—they all get a divorce.”

“Never use the word ‘cheap.’ Today everybody can look chic in inexpensive clothes (the rich buy them too). There is good clothing design on every level today. You can be the chicest thing in the world in a T-shirt and jeans—it’s up to you.”

“There was once a designer in Paris who said, ‘My dresses are only for intelligent women.’ She went out of business, so maybe there were only idiots.”

“I don’t believe in lifetime achievement. For me it is all about the next collection.”