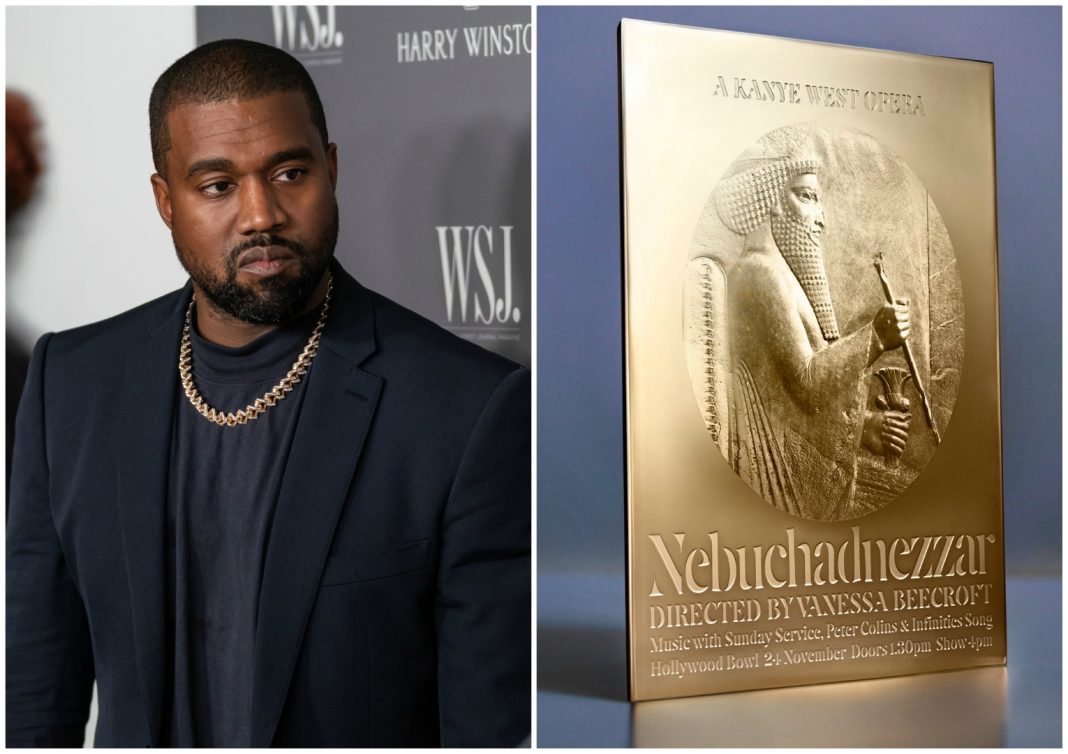 Update (11/21/19): A statement from Kanye West’s camp released this morning clarifies certain details of this weekend’s opera, most notably confirming that the story will essentially draw from the story of King Nebuchadnezzar as told in the Bible. “Set in the 6th century B.C., the Book of Daniel recounts Nebuchadnezzar’s transition from wicked, imperious, self-declared ruler, to a true believer who finds salvation in his faith,” the statement reads.

Kanye West has a lot on his plate. Appearing with controversial ministers, buying multimillion-dollar ranches in Wyoming, releasing an IMAX film to accompany his new record, and, now, staging an opera. Titled Nebuchadnezzar, the opera will premiere at the Hollywood Bowl on November 24–just seven days after its existence was announced.

As of yet, little is known about the production. Promotional art designed by Nick Knight–a frequent West collaborator, who recently directed the Jesus Is King film–hit Twitter on Sunday and gives us most of the information we have to go on.

We know that the opera will be directed by another member of West’s inner circle, Vanessa Beecroft. Beecroft, an Italian performance artist and photographer, specializes in staging tableau vivants with large groups of models, often wearing minimal clothing. Those pieces particularly inspired West, who worked with her to stage dancers for concerts and models for his Yeezy fashion presentations. Now L.A.-based, Beecroft’s husband owns Pio Pico gallery on East Pico, where an exhibit of Beecroft’s paintings opened on November 16.

Musically, the poster indicates West’s Sunday Service choir will be performing, joined by Peter Collins, a guitar player and singer-songwriter who has been a featured performer at Sunday Services before, and “Infinities Song” which many suspect is actually Infinity’s Song, an Indiana group that Kanye West has shown enthusiasm for in recent months.

It’s not clear what the opera’s storyline may be. The title could indicate it will be a retelling of the story of Babylonian king Nebuchadnezzar–a real person who lived from around 605 B.C. to 562 B.C., who appears in portions of the Bible–or it could be something else entirely.

Nebuchadnezzar was on West’s mind during a recent interview with Zane Lowe. “Nebuchadnezzar was the king of Babylon, and he looked at his entire kingdom and said, ‘I did this.’ And God said, ‘Oh, for real? You did this?’ Sounds kind of similar, right?,” Rolling Stone reported him saying in the conversation. “I’m standing on the tip of the mountain talking about Yeezus. Saying, ‘I did this!’ That I’m a god! And I could talk to Jesus at the end of my show. I had a guy dressed up as Jesus, at the end of my show.”

There have been operas based on the life of Nebuchadnezzar once before, NPR notes. The best known, Nabucco, was composed by Giuseppe Verdi in 1841. It tells the story of a complicated, troubled man, consumed by politics, who suffers a nervous breakdown.