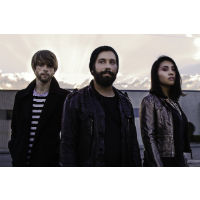 Despite having played only a dozen shows, Kan Wakan is already among L.A.’s most hyped musical acts. The buzz is likely to grow when the band releases Moving On, its first full-length album, on June 3. The songs on the LP vacillate between grandiose orchestral arrangements that could have come from an Ennio Morricone soundtrack and a subtle electronic minimalism, all stitched together by singer Kristianne Bautista’s soulful vocals. The core trio is also comprised of composer and multi-instrumentalist Gueorgui (pronounced “George”) Linev and guitarist Peter Potyondy.

If you want to hear the band, you’ll have to seek out its four-track EP, Forever Found, released last year. Or you can catch the last night of Kan Wakan’s February residency at the Echoplex this coming Monday. Here are seven facts about these musical chameleons.

❶ Kan Wakan grew out of Linev’s solo project, which he decided to expand to include his musician friends. “It started as instrumental minimalist classical music,” he explains. “I mainly worked with string players until I found Peter and Kristianne.”

❷ When Kan Wakan performs live, the trio grows to a seven-piece. “We need more people than the three of us in order to get the dense orchestration from the recordings right,” Linev says.

❸ “When I met Peter we immediately connected on our musical influences,” says Linev. Potyondy shared Linev’s love of minimalist composers like Philip Glass and John Cage. But their connection wasn’t all highbrow: “We were also both huge fans of Wilco.”

❹ Bautista, who had been the drummer in a punk band but was transitioning into singing, was only 19 when she started working with Linev. “It was interesting to see her develop as a singer,” he says. “We didn’t actually know what her role would be in the band for the first year and a half. She has an amazing voice and I think she saw a place for herself in what we were doing.”

❺ “I started playing the piano when I was eight,” says Linev, who was born in Bulgaria. “My uncle [Stefan Linev] was a classical conductor in Europe so I grew up with operas and that kind of music.” Linev also studied composition in the United Kingdom, where he lived between 2007 and 2010. “I found the beauty of the place very inspiring. There’s so much history there, and having been born in Europe myself I instantly connected with it.”

❻ In terms of musical inspiration, Linev can’t escape the obvious references to the great movie score composers of the 20th century. “I’m very inspired by scores from old ’70s films,” he says, citing Jean-Claude Vannier, Ennio Morricone, and Philip Glass as influences. “Music in movies was just really important back then, more so than today.”

❼ Kan Wakan’s 2013 debut EP is a product of the same recording session as the coming album; its four tracks will also be included in Moving On when it comes out in June. “People can expect an album that isn’t about the individual songs as much as it is about the album as a whole. It’s going to be the kind of record you want to throw on the player, sit back, and hear it from start to finish.”