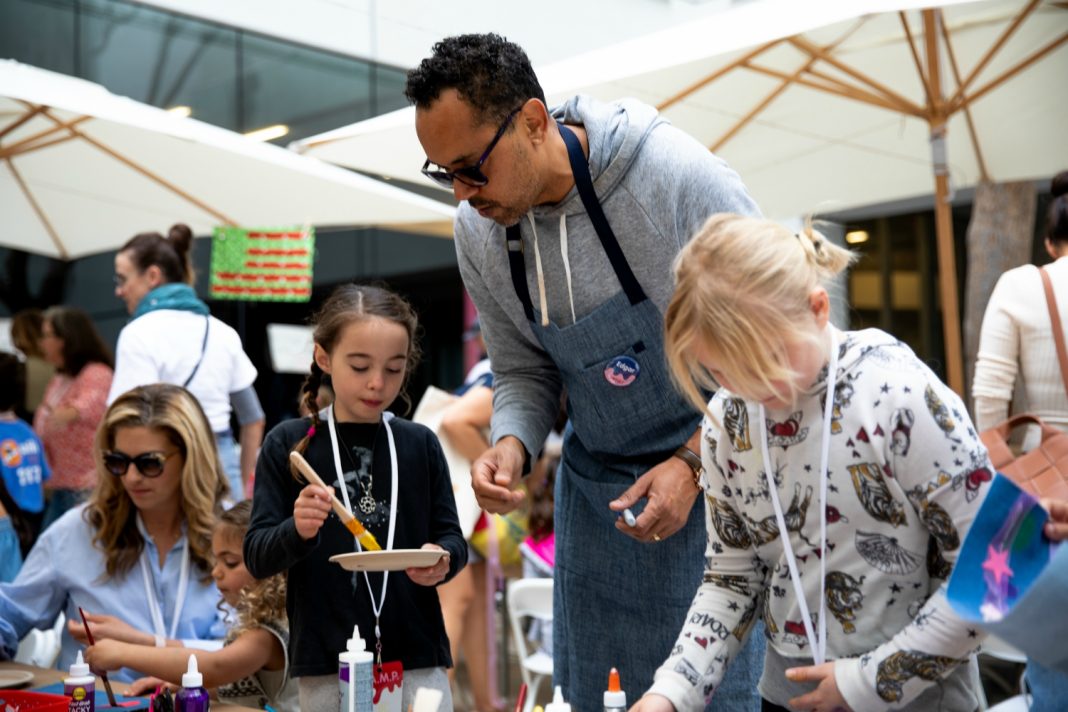 For Brooke Kanter, arts education is a long game. She envisions that the kids—some as young as five—who take part in the Hammer Museum’s annual K.A.M.P. (Kids Art Museum Project) fundraiser will grow up to become donors and trustees themselves one day. “When my daughter was very young,” says Kanter, the event’s founder, “one of her friend’s was over and somehow we were talking about art and the other girl said, ‘You know what, my favorite museum is the Hammer Museum.’ And I know the reason she said that was because she felt connected to the Hammer through K.A.M.P. So I know that, if we can raise a generation to feel connected to an institution, they will give back and continue to support the arts and keep arts education alive when they grow up.”

Taking place this year on May 19, K.A.M.P. is notable in that the kids who participate (tickets cost $150 per child) get to do art projects with professional artists, who specially create activities inspired by their oeuvre. In years past, that’s meant making lava lamps with Max Hooper Schneider, fashioning kites with Elliott Hundley, making image transfers with Njideka Akunyili Crosby, creating sculptures with Mark Grotjahn, designing sports jerseys with Jonas Wood, or making color wheels with Analia Saban. There’s a swank Hollywood element to the four-hour event as well, with celebrities pulling story-time shifts in one room of the museum. With K.A.M.P. celebrating its tenth anniversary this year, the benefit committee is equally starry: supporters this year include Lost and The Leftovers co-creator Damon Lindelof, publisher Benedikt Taschen, and designer Tom Ford, and Kanter’s co-chair is Sarah McHale (wife of comedian Joel).

All of the money raised goes to support the Hammer’s year-round free arts education programs, which serves over 60,000 families annually. (To date K.A.M.P. has brought in $1.4 million.) This year, the likes of Armie Hammer and his wife Elizabeth Chambers, Sofia Vergara, John Stamos, and Taye Diggs will be reading to kids, while artists including the Haas Brothers, Louise Bonnet, Carolina Caycedo, Sam Falls, Laura Schnitger, and Alex Israel will be leading art projects.

Kanter, whose husband Adam is a talent agent at Paradigm, says she got the idea for the event because she wanted to get her own young kids engaged with art. “I wanted to find a way to demystify a museum,” she says. She recalls being a kid herself when her mom took her to an event at the now-defunct Los Angeles Children’s Museum in DTLA, where she got to paint with L.A. artist Chuck Arnoldi. That experience inspired K.A.M.P. Years ago, she first approached another museum in town about creating the event but they declined. Soon after, she met Hammer director Ann Philbin at a dinner party. The next week, the two had lunch. “At the end of the lunch, she said to me, ‘Let’s do it,’” says Kanter, who is the co-founder of Marky, a monthly subscription company selling boxed art projects for kids (which gives a portion of proceeds to arts education). “I think one of the amazing things about something like K.A.M.P. also is that certain children realize, when you put them together with artists, that there are ways to make careers out of this.”

We spoke with one of this year’s participating artists, Patrick Martinez, at his studio in Vernon, about what it’s like creating an art project for children and how early arts education helped spark his own career. Martinez, an ArtCenter College of Design grad who shows with Chinatown’s Charlie James Gallery, has gotten attention in the past few years for his multi-layered “landscape paintings” which incorporate elements of L.A.’s built environment, from neon lights to ceramic roses inspired by roadway memorials, and center on themes of decay and gentrification around the city.

Is this your first time taking part in K.A.M.P.?

My first time. It happened after the museum’s Hammer Circle collectors’ group did a studio visit with me. We rapped about my work. Right after that they expressed interest in my taking part. I said, ‘Of course. If it’s some type of benefit helping youth, I’m with it. The reason that I’m into that is because I remember early on for me, it was about going to spaces like that. For me, it wasn’t the Hammer. It was Armory Center for the Arts in Pasasdena. I remember being bused over there and getting these projects like clay sculptures you wouldn’t work on in elementary school. It was really cool that we got to work on them in a studio setting and we got to see these kilns. I remember how nice it felt in that room. Unfortunately, you know, there are so many schools here in L.A. that don’t have art programs anymore.

What are you planning for K.A.M.P.?

I’m taking what I’ve been doing and kind of shrinking it down, like the tile and the ceramic roses that I do by hand. I’m finding materials that would be kid friendly. For the roses, we’re using a paper clay. It air dries, so you can paint it, and it’s not toxic. We’re going to prep an 11×17 Masonite sheet of wood for each kid and they can paint it and add different textures with stucco and little pieces of tile. We’ll have a roller option where they can roll on paint and then spray sugar-based paints with a spray bottle. I want to give them materials that normally you can’t find in an art store.

How did you get started as an artist?

I was always drawing, right? I was very shy when I was in elementary school. My mode of communication was drawing. I wouldn’t talk a lot so my teachers thought I didn’t speak English. They put me in ESL class. My parents were pissed. They were like, “What are you doing!” They complained and they put me back in regular class after like four days. I kept sketchbooks. And you get your friends to draw in it and then you would pass it along. I saw spray can art and subway art, what those guys were painting on the sides of trains, and that’s what I was drawing. The comic book characters, the cartoon characters. As a teenager I got into graffiti. I probably started when I was 12, and that was ’92, and I stopped at 21. It became communal. My friends and I would hang out and paint. All that taught me how to be organized and get your materials together and have a kind of discipline that you need as an artist. You have to have your shit together.

How would you describe the pieces that you call your “landscape paintings”?

A lot of them are four to five different places that I see around Los Angeles kind of combined into one work. I take materials from the landscape, meaning tarps, tile, ceramic, signage, and neon. I like observing things that people overlook, like the surfaces of buildings that are being painted out or being demolished, like the white tiles in the tunnels along the 110 Freeway going to Pasadena, or the neon color from Corona ads, or posters in a window that are blue cyan because they’ve been drenched in sun. Or when you see that there was graffiti on a building and shop owners will try to match colors and try to paint it out and it isn’t really matched. That’s Los Angeles. So I’m kind of collaging places that I’ve seen.

RELATED: The Best Exhibits at Museums and Galleries in L.A. in May