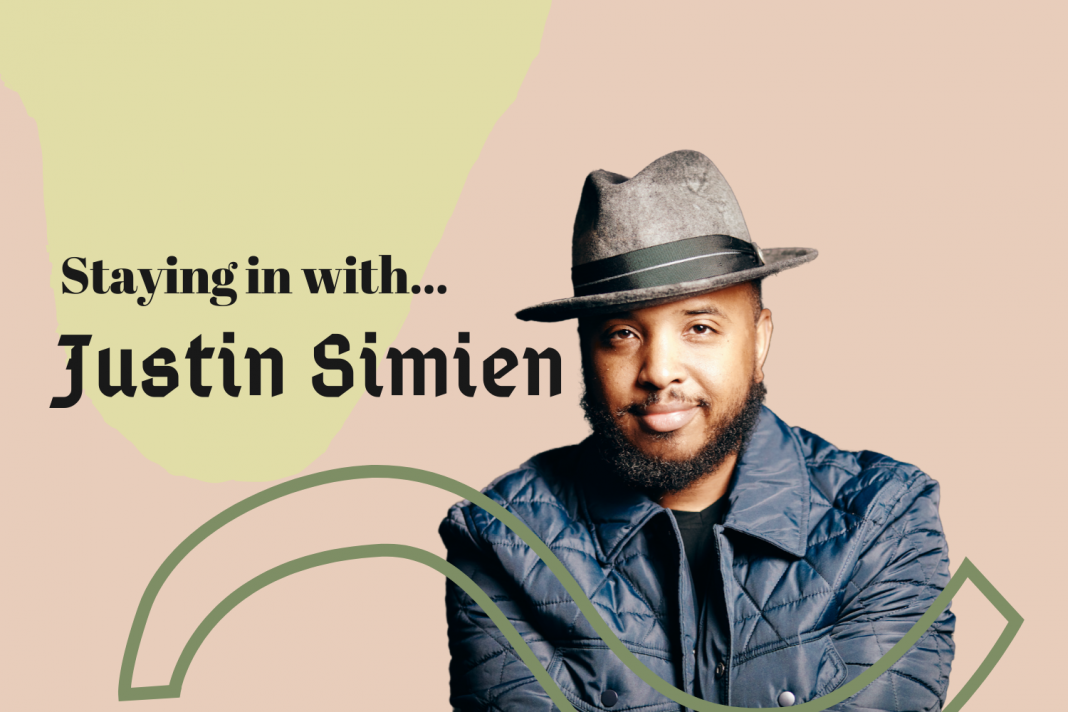 For our Staying in with… series, we ask interesting people what they’re watching, reading, and listening to while we all stay at home. In this edition: Justin Simien. Find more in our Inside Guide.

Back in January–approximately eight lifetimes ago–filmmaker Justin Simien was debuting his latest feature, Bad Hair, at Sundance. The latest from the Dear White People creator is a “campy horror film,” according to Variety, set in 1989 Los Angeles, featuring (take a deep breath) Lena Waithe, Vanessa Williams, Blair Underwood, Nicole Byer, Laverne Cox, Kelly Rowland, User, MC Lyte, James Van Der Beek–and a weave with a mind of its own. Bad Hair will be streaming on Hulu, with a release date to be announced soon.

Justin Simien Is Staying in With…

Escapism in the time of a pandemic, I find, has been tricky. I’m currently writing season four of Dear White People, which makes all viewing of contemporary dramedies and comedies fun, but tinged with that “work” feeling that defies a real escape. When I’m working on the show, I usually escape by watching trashy reality TV, all of which now has an undercurrent of unintended dread. How can I watch chefs compete without future-tripping over the state of the fragile restaurant economy? Or enjoy a drunk-for-TV argument between housewives without imagining the corona droplets surely circulating their events, where no one is standing six feet apart?

The only thing that consistently protects my “reality time” from containing any pesky reminders of reality is, of course, drag queens. RuPaul’s Drag Race remains not only the best reality competition show on television, it’s also the most diverting. Every part of it is both a parody and celebration of reality troupes. The hilarious talking-head diary segments where the queens perfect their “boy-drag” personas. The sound effects used to punctuate produced tension, usually between the judges’ favorites and the underdog competitors. Even when it deals with heavy subjects such as the queen’s real life stories of growing up queer in a hostile world, it’s all framed around transforming that pain into art! Oh and the catch-phrases! From “she done already done had hers’s” to “bring back my girls,” laugh lines are built into the format and I couldn’t be more grateful. And there is nothing, absolutely NOTHING, more joyous than watching Leslie Jones this season get to guest judge her favorite drag queen competition. That ominous Sherry Pie notice that begins each episode of this season, be damned.

There is always cinema. And while I love exploring films and rabbit-holing into genres and directors’ careers, I can’t always help but analyze them and again I’m mentally back at work. I like the kind of work I do, but to really unplug, Star Wars has been the salve.

I’ve seen every Star Wars movie multiple times, so the analytical part of my brain that evaluates films as I watch them quiets down, letting me get lost in the explosions and the puppets and the soap of it all. I also find the order in which one chooses to watch the movies can greatly enhance the pleasure of them. I decided this time to go Rogue One, New Hope, then Empire Strikes Back. I like getting to the “I am your father” tea in Empire before flashing back to Phantom Menace, Attack of the Clones, and then Revenge of the Sith. I then went Solo and Return of the Jedi. There’s something about having just witnessed the hot-messery of Anakin Skywalker’s love life in Episodes I-III and rediscovering Han’s heroic origins in Solo that makes finally watching Return of the Jedi all the more satisfying.

Whatever one may think about any particular Star Wars film, watched as a whole, it is remarkably engrossing space opera that takes you on a journey through time, space, and the evolution of special effects.

I eventually continued on through the Disney trilogy, which, while very satisfying, also started to give me the sense memory of arguing about films on Twitter, causing more need for escape.

Which leads me to therapy from home. Because escaping reality only works for so long, I’ve found facing it via Zoom in one-on-one and group therapy sessions to be essential. There’s something about not physically being in front of a therapist that is liberating. I won’t go so far as to say I prefer tele-therapy to in-person, but it opens me up in ways I’ve found surprising. Probably because I am usually still in pajamas. Of all the “at-home” projects I see bandied about, from workouts to closet organization, mental health for me is the most rewarding. Mental health without having to drive and park is a sliver of a silver lining I will take during these difficult times.

The other thing I’ve been doing a lot of to pass the time is sleeping with a face mask on during parts of the day unthinkable a couple months ago. But because that’s a boring closer, let’s jump to gaming. Thanks to various neurosis (see tele-therapy) I find Animal Crossing to be delightful but also a constant reminder of the oppressive side of capitalism, and have found the Apple Arcade game Grindstone to be my go-to. It’s an action puzzle game like Candy Crush but with monsters and without being constantly gouged for money. The graphics are gorgeous and the soundtrack is on point. There is something so satisfying about slashing through chains of monsters and finding a way through the increasingly tricky levels as you hunt for “grindstones” in order to upgrade weapons and gear.